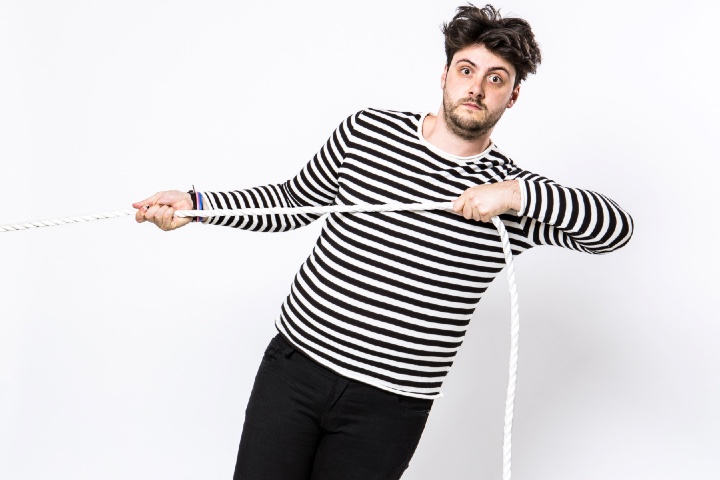 After getting cancelled last year due to the Coronavirus pandemic, the Melbourne International Comedy Festival is back this year with the promise of “COVID-Safe laughs”. Here are our top picks of queer comedy performances at the festival:

Over recent years, Australian comedian Zoë Coombs Marr has been taking the world by storm with her off tap comedy that takes no prisoners. This concert is revisiting a concert that was revisiting a concert that happened sometime in the past and is now happening sometime in the future. It was almost called Zoë Coombs Marr Starring Bernadette Peters as the Witch, but they wouldn’t let that transpire.

Tom Ballard – We Are All in This In 2019 Tom sold out shows all over the world, received critical acclaim and annoyed a lot of Baby Boomers on Facebook. In 2020 he took some time off and wrote a book. Now he has a brand-new show full of jokes about what the hell just happened, our cooked planet, the bad people in power and falling in love.

That One Time I Joined The Illuminati Multi award winning comedian Lou Wall has been presenting work for audiences Australia wide for years now. Lou is back with a vengeance in a new show which asks the big questions like do the Illuminati actually exist? What’s their big secret? And can a 24-year-old with social anxiety, insurmountable HECS debt and a penchant for using their birthdate as their PIN somehow infiltrate the global elite?

Patrick Collins – I’m Not A Mime Patrick Collins is an up-and-coming comedian who took home Best Comedy at the 2020 Melbourne Fringe. In his latest show he asks, what it means to be a mime in today’s world? Patrick wouldn’t know because Patrick is not a mime. Don’t expect the answer to that question in this show. All you’ll get are jokes. Then won’t you look foolish? Nath Valvo’s hilariously physical, high-energy comedy is impressing critics and winning crowds across the globe. Not many comedians can boast that their fan base includes TV royalty, but Nath has the Tweet from Graham Norton to prove it. Nath has missed our adoring attention and we’ve missed his high kicks and so he is back with a brand-new hour, where you can witness this five-star comic rip into Fitbits, relationships, baby showers and people that make good life choices.

Geraldine Hickey What A Surprise Geraldine is the type of person that’s happy to let other people lead, but is proving to everyone, including herself, that life begins at 40. Leaders do all the work and know what’s around the corner. Geraldine doesn’t want to know what’s around the corner, she wants to believe there might be a bouncy castle there. Deadpan and bang on. Smart, observational comedy has never been so funny and frank.

For A Good Time Call The new generation of Australian comedy is female, multicultural, queer, weird, dirty and thoroughly funny! Inspired by bathroom wall graffiti, For A Good Time Call is a jumble of wild stories, dark jokes and ridiculous antics that will provide Melbourne audiences three new contenders for their favourite comedian. For A Good Time Call is an exciting split bill from some of Melbourne’s best comedians on the rise.

Reuben Kaye The Butch Is Back A name synonymous with queer comedy, after 10 years abroad, touring Europe and the UK, international cabaret star and award-winning cry for help Reuben Kaye is back with a new show, new songs and a brand-new look. Backed by his band The Kaye Holes, Reuben is what happens when you tell your children they can be anything. Held at iconic Melbourne Venue, LOOP Project Space and Bar tucked away on Meyers Place up the Paris End of the city, Queerly Beloved is an all-Queer comedy showcase, laying to rest the tired exclusionary ideals of comedy. With a rotating line-up of Australia’s best, Queerly Beloved is a show full of the stories and voices that need to be heard.

Dazza And Keif Go Viral In Space With Ya Mum Drag Kings Dazza and Keif are intergalactic heroes who are gonna save the world and shit, starting by being the first blokes to breakdance on the moon. Plus they heard there’s heaps of hot space chicks in the Milky Way if ya know what they mean. This award-winning drag duo presents high-energy dance nostalgia, hyper-masc homoeroticism and a record-breaking number of dick jokes per minute. Their spaceship is ready. Wanna ride?

Bella Green Is Charging For It The Breast Of Fest Over the past couple of years, The Breast Of Fest has become one of the Melbourne Comedy Festival’s ‘must see shows’. Starring Jordan Barr, Prue Blake, Donna Collins, Cat Finch & Sashi Perera The Breast Of Fest is known for its sharp power suits and even sharper jokes. Showcasing Melbourne’s top emerging comedians, plus surprise guest breasts on various nights, which in the past have included the likes of Celia Pacquola and & Claire Hooper. After touring across the country, Anna Piper Scott is back with her critically acclaimed, award winning, sold out smash hit show, Queer & Present Danger. A comedy show that is all about the myths and misconceptions surrounding trans people. Empowering, unapologetic, hilarious stand-up comedy unlike anything else. No matter how queer or straight you are, this is the show for you.

Alex Ward As You Live And Breathe “2020 was a year for reflecting… mostly my own face in the laptop screen in bed,” says Alex Ward, a comedian many might recognise from the ABC series At Home Alone Together. As a Queenslander living in Melbourne, Alex is always cold, which makes the warmth she brings to the stage all the more impressive. With personal, engaging and punch-line heavy comedy, this show reflects on the year that was 2020.

An Intimate Evening With Granny Bingo Everyone’s favourite granny’s Edith Vale and Maureen McGillicuddy are set to take audiences on an intimate journey as they bare all and reflect on their many, many years on this planet. Join them for a camp romp through their privileged lives; free university, low property prices and a world with little to no regard for the environment, if they can stay awake until their 6:10pm time slot… One-night stands are awkward. One-night stands with animals are more awkward. And when you’re as desperate to please as Bobby, things get awkward  He’s just a guy with too much love to give, and a burning desire to give it to consensual adult mammals. So if you decide to take a walk on the wild side and delve into a bit of strangeness, then this is the show for you.