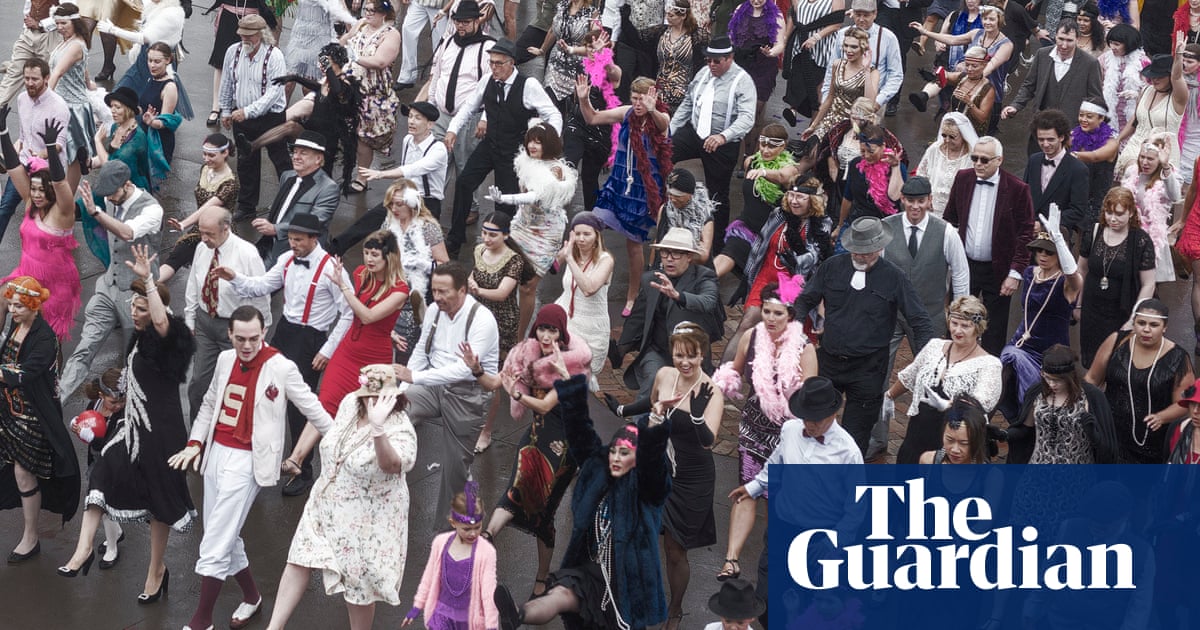 “If your boas are wilting, make your way to the first aid tent where they will be revived.”

This isn’t a common problem at most festivals, but for many of those who attended the Roaring 20s festival, held at the Hydro Majestic in the Blue Mountains last weekend, wilting feather boas were one of the mini-dramas caused by the unexpected drizzle.

Boas, beads, candy-striped blazers and sequined headbands were de rigueur as hundreds turned up for the Charleston Challenge, an attempt to break the Guinness world record for the most costumed people gathered to dance the Charleston.

It’s a record the community had proudly held until February 2014 when 319 people turned up to dance. Then in July 2015, a group in Bexhill in the UK nabbed the record with 503 people, which was then in turn quashed by 975 20s-costume-clad folk, who took up the challenge at London’s Spitalfields market in October 2015. Now the Australians hoped to get it back, despite the inclement weather.

First there were a few not-so-dry runs. With their finger-waved hair and art-deco inspired flapper dressers, the Sydney Swing Kats dance troupe took the crowd through a few simple Charleston-esque paces: “Step, tap, step, tap. Kick, tap, kick, tap. Paddle, paddle. Knock knees. Push. Pose. Push. Pose. Tick-tock”, with a couple of “woos” thrown in for good measure. The 10-year-old next to me was more coordinated than most of us adults, but we were all mostly going in the same direction. Mostly.

Then it was time. The big band, sheltered under the eaves of the Hydro Majestic cafe, struck up that familiar 1-2, 1-2 jazz beat, there was a loud siren, and our dance leaders shouted out: “Step, tap, step, tap…” Apart from the required “woos”, the crowd was silent, concentrating fiercely on the steps.

And after five minutes of stepping, tapping and tick-tocking, another siren sounded. All done. Although there are only about 400 of us, and no records fell this time round, everyone clapped our efforts, before huddling away from the rain.

The dancing may have been over but the fashion parade wasn’t. Those who’d dressed up clearly enjoyed the novelty of it all. Many of the besuited men in boaters or flat caps crooked an elbow for their glamorous partners with their red lips and bobbed hair; and there was a smattering of black-suited gangsters in trilbies squiring fake-fur-draped dames puffing on empty cigarette holders.

There were clear standouts: notably a group who’ve become known as the #vintagesquad. The glam group of friends includes Kitty Von Tastique, Belles, Eszter, Kath and Scott (who appeared to be channelling Fitzgerald). With her orange pin curls and oriental-embroidered dress, Kath took out the best dressed woman title. She explained to me later she’s been collecting vintage since she was 14, happily surviving on tea and toast to afford an original gown every now and then. Her favourites have names such as Dolores and Cynthia, and she loves nothing more than dressing up and attending retro events such as this. After the downpour, she switched to a dropped waist black evening gown, embroidered with tiny glass beads, although I didn’t catch the name of this one.

Another festival event is the Majestic Long Lunch, an annual event created to showcase regional produce. With dishes from local restaurants such as Kinship Kitchen, Echoes Restaurant and the Hydro Majestic’s Wintergarden restaurant and cheese from Carrington Cellars, the menu was a handy cheat sheet for local dining. There was also an extravagant chocolate dessert from Blue Mountain chocolatier Josophans Fine Chocolates. Made without preservatives, the handcrafted chocolates are available from their Leura and Sydney city stores and online, but must be eaten within seven days.

The event is clearly beloved by the locals, and it wasn’t long until all the characters were table-hopping and dancing between courses. Before dessert Charlotte Smith, owner of the Darnell collection, a 9,000-item collection of haute couture garments, presented an Agatha Christie’s Murder on the Orient Express-themed fashion parade of original twenties outfits. Models in beach pyjamas worn with a silky bed jacket; a black tulle evening dress with delicate lace and silk crepe; a pair of palazzo pants, chiffon shirt and gold cardigan; and a heavily beaded bridal gown with organza walked up and down the catwalk, a glimpse of genuine twenties dressing.

There was a 1929 La Salle Cadillac parked outside the event, one of four vintage cars owned by Donald Millar of Blue Mountain Vintage Cadillacs. Aside from being the ideal selfie backgrounder, the cars can be hired along with Millar for weddings, picnics and long tours through the mountains. Born and raised in the Blue Mountains, Millar knows much of the local history and the ideal spots for dramatic landscape snaps.

The luncheon drifted long into the afternoon, with some visitors fortunate enough to stay overnight at the magnificent Hydro Majestic hotel. First opened in 1904, it was built by local shopping emporium magnate Mark Foy. With its distinctive dome set against whitewashed walls and sprawling gardens, it was the place to go for those who could afford to escape Sydney in the early 20th century. Notables including Dame Nellie Melba, Olympian Freddie Lane and Sir Arthur Conan Doyle stayed there.

Over the years, the hotel lost some of its lustre but was reopened in 2014 after a reported $30m refurbishment by hoteliers Huong Nguyen and George Saad of the Escarpment Group. It has been lovingly restored and then some. The food and the service in the Wintergarden restaurant is first-class, but the wraparound views of the mountains alone are worth the trip. The attention to period detail in common areas such as the Salon du Tea and Cat Alley are worth examining, and the rooms themselves are luxurious and contemporary with just enough art deco influence. Like much of the Roaring 20s festival, the hotel is like a fantasy trip back in time, while retaining all the comforts of the modern age.