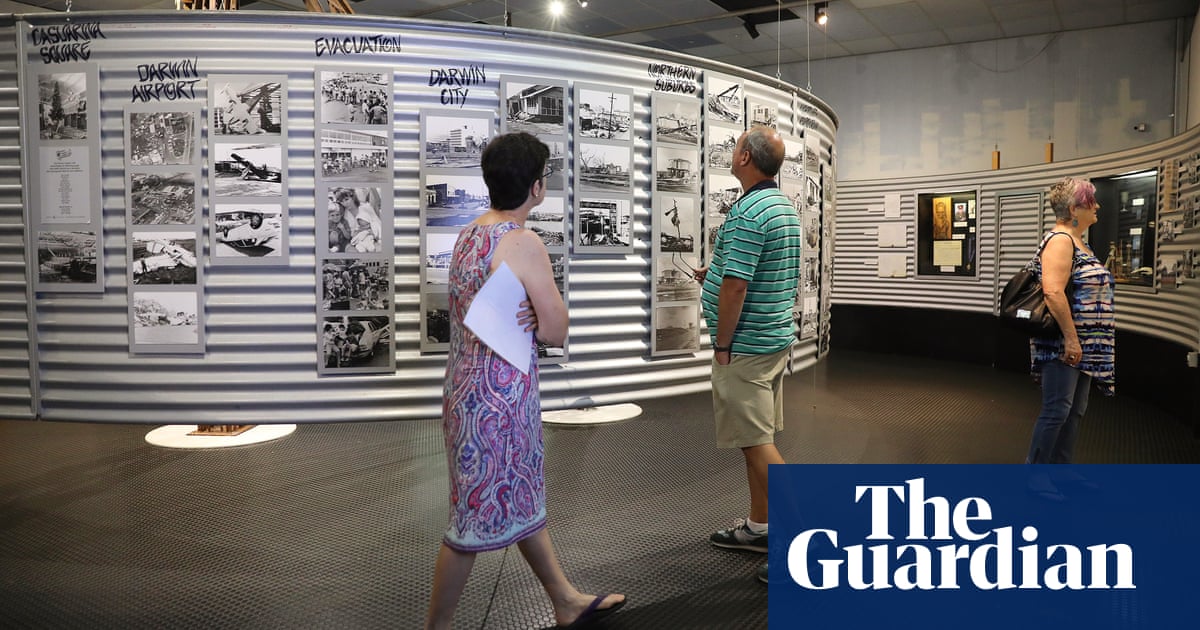 The Northern Territory is a dream destination for history buffs. Those after an archeology fix will appreciate Kakadu’s ancient rock art and stone tools, others will be keen to learn about life as a late 1800s Chinese goldminer in Darwin and most will appreciate the heroes of Aboriginal Australia demanding land rights in Yirrkala, north-east Arnhem Land, and in Kalkarindji on the Buntine Highway.

Cyclone Tracy exhibit at the Museum and Art Gallery of the Northern Territory, Darwin

Top Enders live with extreme weather in a way few southern Australians can comprehend. It’s interminably hot and the rains seem to turn on and off like a tap: when it’s not bone dry, you have to contend with raging floods. But even the hardy locals of Darwin couldn’t prepare for the fury of Cyclone Tracy, the storm that came tearing down from the Arafura Sea on Christmas Eve 1974, taking 66 lives.

A permanent exhibition at the Museum and Art Gallery of the Northern Territory includes before and after photos that capture the devastation wreaked on the flattened town. Don’t miss the terrifying cyclone room where, in pitch black, you can experience for yourself the screaming, screeching sounds of the wind and the groaning of buildings and trees: on the day maximum gusts of 217km/h were recorded before equipment failed.

The bombing of Darwin during the second world war was the first and largest foreign attack on Australian soil in the country’s modern history. While most of this story is told at themilitary precinct at East Point, the city itself is a living museum of that period, with military heritage sites including the second world war oil storage tunnels at Darwin’s waterfront, a cenotaph on the city esplanade commemorating Australian servicemen and women, and a monument to the USS Peary using one of its recovered deck guns. The US destroyer was sunk on 19 February 1942 by Japanese aircraft and still lies at the bottom of Darwin Harbour.

Be sure to reserve a few hours for the expansive second world war precinct including the Darwin Military Museum, an original command post complete with observation tower and relics of the steel boom net designed to prevent the entry of enemy submarines into the harbour. Learn about the impact of 77 Japanese air raids on a lightly defended town at the immersive and interactive Defence of Darwin experience adjoining the museum.

In the late 1800s, an estimated 4,000 Chinese people lived in Darwin, outnumbering Europeans by six to one. Many of these early pioneers had been shipped out to the colony to work on the new overland telegraph or railway lines but a great deal more came during the gold rush. Soon this supported an entire Chinese community of bakers, farmers, shopkeepers, carpenters, fishmongers, shoemakers, cooks, tailors and domestic servants.

The small but charming Chung Wah museum in Darwin tells the origin story of Chinese Australians in the Top End, tracing the community’s many struggles including the dampening effect of the White Australia policy and the past half century of mainstream success – today the city has a fifth-generation Chinese Australian lord mayor, Katrina Fong Lim. Drive a few hours south to the old mining town of Pine Creek for a better impression of what the frontier days were like, with visits to a former bakery run by a Chinese family and Pine Creek’s National Trust Museum.

Interpretive rangers at the Kakadu national park love to reel off mind-boggling numbers: the park has rock art up to 20,000 years old, making it one of the longest historical records of any group of people in the world; another site called Malangangerr boasts evidence of human occupation dating back 50,00 to 60,000 years – the oldest in the park.

The ranger tours come free with a parks pass, which is required for entry, and are an excellent way to not only put into context what might otherwise look like an ordinary rock shelter or stone tool but provide a window into the lives and culture of the local Bininj/Mungguy traditional owners who, in their words, have called these lands home since the time of creation.

And there are magnificent examples of ancient rock art to be seen at the Ubirr and Nourlangie sites, documenting a world teeming with wildlife, spirits and warriors, as well as the 1800s arrival of strange, hat-wearing, pale-skinned buffalo hunters.

• The Ubirr and Nourlangie rock art sites are in Kakadu national park, (08) 8938 1120. A pass is required for entry to the park and can be bought online

Long before Captain Cook’s feet hit Australia’s sandy shores, Aboriginal people from our northern coastline were trading with seafaring Macassan fisherman. For precisely how long the Macassans made the annual journey from the Indonesian archipelago to Australia in search of sea cucumber, turtle shell and pearl shell, which they would then sell on to Chinese traders, is unclear but some archaeologists estimate their voyages began in the mid-1600s.

Up in Arnhem Land, at a heritage site called Wurrwurrwuy (Garanhan), you can visit a series of stone arrangements documenting this trade relationship. The stone outlines are believed to have been created by local Yolngu elders towards the end of the 19th century to illustrate the wooden “prau” boats the visitors would arrive on and stone fireplaces used to boil sea cucumber. According to the Dhimurru Aboriginal Corporation, relations between Yolngu and Macassans were “generally business-like and often cordial”.

• The Macassan beach interpretive walk is at Wurrwurrwuy (Garanhan) in north-east Arnhem Land. A permit to visit this site can be obtained from Dhimurru Aboriginal Corporation, (08) 8939 2700

In 1963 a group of Yolngu elders from the remote community of Yirrkala in north-east Arnhem Land sent a petition to the commonwealth parliament objecting to the seizure of 300 sq km of their land for bauxite mining. The petition was typed on paper in both English and Yolngu and framed with painted bark in special designs that made it a document of Yolngu law. It became the first document to bridge commonwealth law with the Indigenous laws of the land.

That same year a series of exquisite, four-metre-tall church panels was painted telling sacred Dreaming stories of the clans of Yirrkala. These panels were much more than wall decorations – like the bark petition, in Yolngu culture they had the weightiness of a spiritual or legal document and asserted Aboriginal custodianship of country. You can see these panels at the Buku-Larrnggay Mulka Aboriginal Art Centre alongside a reproduction of the bark petition (the original is at at Parliament House).

We of the Never-Never, Mataranka

The 1902 Australian classic We of the Never-Never, by Jeannie Gunn, was published as a novel but was in fact a close account of the year Gunn spent at Elsey station near Mataranka, accompanying her new husband. Back then it was highly unusual for a European woman to live at such a remote outback station but Gunn overcame prejudice and hardship and her book is a warm and lively, albeit rose-coloured account, filled with stockmen, Aboriginal domestic servants and a jolly Chinese cook.

Buoyed by the 1982 film adaption shot on location, the tiny town of Mataranka continues to make the most of its association with the book. In the town centre is a park with some rather shabby statues of the characters. A visit to see a replica of the homestead is a better experience. While you’re there have a dip in the nearby hot springs and grab lunch in the courtyard where they play the film every day. Not far from town is a cemetery with the graves of many of the characters, including Gunn’s husband, Aeneas.

• Mataranka Homestead is on Homestead Road, Mataranka, (08) 8975 4544. The Elsey station cemetery is on Elsey Cemetry Road just off the Stuart Highway, 5km south of the Roper Highway turnoff. Free admission

It’s a story that was immortalised by the Paul Kelly and Kev Carmody song From Little Things Big Things Grow: a group of about 200 stockmen and their families, mainly from the Gurindji nation, walked off the Wave Hill cattle station owned by the British pastoral company Vestey Brothers in 1966. Led by Vincent Lingiari, they wanted much more than simply equal pay and better working conditions – they demanded the return of the land that had been stolen from them.

The 50th anniversary of the walk-off in the tiny settlement of Kalkarindji also featured the opening of a walking track with new heritage signage housed in steel and iron pavilions designed by the University of Melbourne’s award-winning Bower Studio. You can visit the hand-back memorial, an art centre called Karungkarni Art housing memorabilia, historical photographs and archival films, and the town cemetery where Lingiari is buried.

• Karungkarni Art is at Lot 77, Buntine Highway, Kalkarindji, 0427 177 779. If you would like to visit, you must call ahead to arrange an appointment. Free admission

Back in 1872, there was no town called Alice Springs, just a repeater station on the overland telegraph line that ran the 3,200km between Darwin and Port Augusta in South Australia. As a township bloomed, it opened up the central desert region to European settlement and changed the lives of the local Arrernta people forever.

The site is now 4km out of town and is a good place to get a feel for what those early colonial days were like. It’s also a good spot to learn about the real-life Alice Todd, the wife of Sir Charles Todd, the superintendent of telegraphs, after whom Alice Springs was named. Among the restored stone buildings are barracks, a post and telegraph office that once operated using morse code, and the station master’s residence. Hire a bicycle from Outback Cycling if you want to explore nearby bush tracks or walk the trail to a great vantage point for sunrise or sunset.

The Hermannsburg Historic Precinct is an odd but fascinating village of buildings telling the story of a motley crew of Lutheran missionaries who travelled from Germany to set up a church in the middle of the Australian desert. Whether the missionaries were successful or should be congratulated for their ambition to convert local Arrernta people to both Christian beliefs and western lifestyles depends on who you talk to.

Despite its sometimes muddled signage, this remains a compelling place: as you wander aboutthere’s a sense that ghosts from the past, including many Arrernta men, women and children and the smaller number of German pastors and their families who once called this place home, continue to linger in the well-preserved church, classrooms, workrooms and living quarters. One of the buildings also exhibits work by the community’s most famous artist, the landscape water colourist Albert Namatjira, and you can visit his humble whitewashed house by driving 5km west of Hermannsburg.

• Hermannsburg Historic Precinct is at 47 Raberaba Circuit, Hermannsburg, (08) 8956 7402. Admission fees are $11 for adults, $9 for concession card holders; free for children