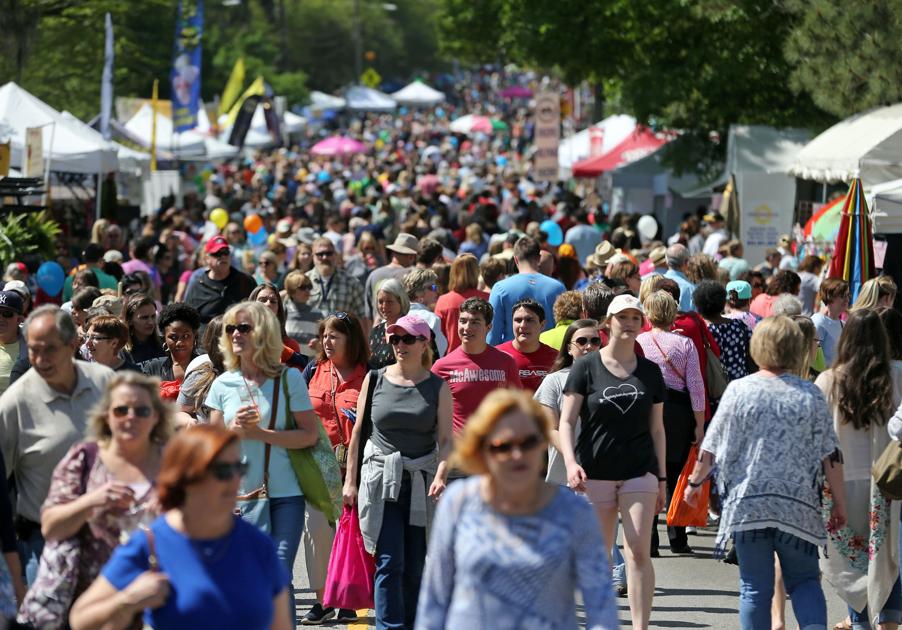 The 2020 Flowertown Festival in Summerville is not happening this year, leaving dozens of businesses and organizations with a major financial loss.

This is the first time in 48 years the town won’t have the festival. Originally postponed from April until Labor Day weekend, the festival has been canceled due to the ongoing threat of the coronavirus.

It’s one of the largest events in South Carolina. As many as 250,000 tourists and locals come down to the area to join in the festivities.

The festival has been around since 1972 and is organized by the Summerville YMCA. It consists of various vendors, artist showcases, food trucks, a farmers market and rides and activities for children. In the normal year, the spring festival is a celebration of the blooming of flowers in Azalea Park.

Kim Howell, director of development and business for the YMCA, said the organization expects to lose more than $100,000 from the cancellation.

The event hosts over 300 arts and crafts vendors who make hundreds of items solely to sell at the festival. For those people, Howell said, the festival is their livelihood.

“You don’t realize how much this event affects so many hundreds and hundreds of people until you don’t get to have it,” she said.

The Summerville YMCA uses the festival as one of its chief fundraising opportunities. The money the organization makes from the festival goes to its financial assistance program.

That program helps local residents pay for the things like memberships fees and rates for special programs for children. With school starting up in September, the YMCA is expecting to help working parents watch over children.

Dorchester District 2 has a hybrid program planned where some students will be in school while others participate online. The YMCA’s financial assistance program will help parents pay fees to the organization watching their children on those virtual school days.

No festival means a harder time for the YMCA in building their financial assistance program.

“The safest and most responsible decision we could make for all involved at this point in our 48-year history is to cancel,” said Chris Sapp, CEO of the Summerville YMCA.

Thousands of dollars also come into the town as a result of the festival. Local restaurants, businesses and hotels typically benefit from the influx of people in the area.

Rita Berry, president of the Greater Summerville/Dorchester County Chamber of Commerce, said the impact on local businesses is mixed. During the festival, a lot of restaurants are packed with customers.

“A lot of people are in town not just for the festival,” Berry said.

The Cooper River Bridge Run typically takes place around the same time as the Flowertown Festival. This year would’ve been the first festival for the Hilton Garden Inn in Summerville. Keith Gaines, the general manager, said they didn’t even get a chance to include the festival in the hotel’s budget.

Not all of the businesses necessarily benefit from the festival weekend. Because of everything going on with the event, tourists may not shop at certain businesses in the downtown area, Berry said.

Summerville natives may avoid the downtown area to dodge the crowd. The festival also brings in a lot of vendors that attract tourist dollars. But Berry said she knows businesses see a benefit later on.

Some use the event as way to advertise their business in brochures and at booths or do a special sidewalk showcase. Then, people in the area typically come by the business at a later date after the festival.

“It gives them an opportunity to tap into a new market,” Berry said.

Around 150 businesses depend on the festival for marketing. That weekend of exposure helps owners get through the rest of the year, Howell said.

“It’s not just about those three days,” she said.

Nonprofit organizations usually benefit the most from the festival. More than 100 nonprofits participate in the festival.

The event is a chance for those organizations to build awareness and let the public know about their missions. Similar to the YMCA, it’s also a missed opportunity for fundraising.

The YMCA is hoping to make its annual Giving Campaign in October more robust to help make up for the cancellation. The best thing residents can do now, Howell said, is to just come by the YMCA and see what it has to offer.

The 2021 Flowertown Festival is scheduled to take place on March 26-28. Howell said a worst-case scenario is that the festival will have to look different because of the pandemic.

“I am very optimistic that as a town that we can pull together and still be able to hold that event,” she said.

Get the best of The Post and Courier, handpicked and delivered to your inbox every morning.