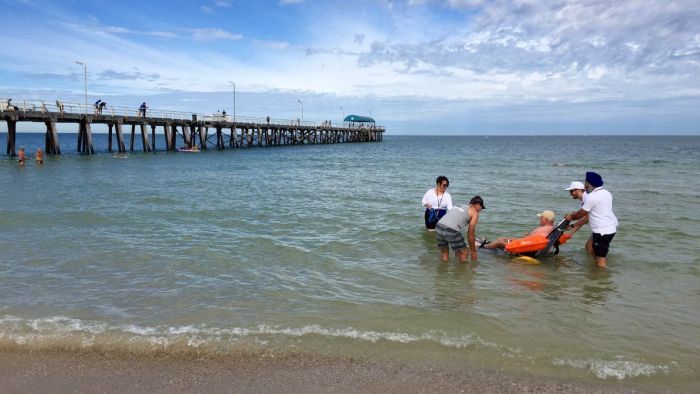 Related Story:
Mats rolled out to give people with disabilities access to Adelaide beach

Several wheelchair users have taken their first dips in the ocean at Adelaide’s Henley Beach where a special, accessible mat was rolled out to the water’s edge.

The mats are used regularly at Seacliff and about 10 other patrolled beaches across Australia, but organisers hope they will become a regular sight around the country.

Shane Hryhorec, from Accessible Beaches Australia, said it was a relatively simple idea that could make a big difference to people’s lives.

“The mat just rolls out and it becomes a pathway for people to take their own chair down to the water, and then there’s also products like beach wheelchairs … so you can head out into the water and have a swim,” he said.

“Going to the beach is as Australian as putting a shrimp on the barbie … so for people to have an experience of beach access just for one day is pretty powerful.”

Mr Hryhorec said only a fraction of about 315 patrolled beaches in Australia were participating.

“People just want to head down here and experience the beach just like everyone else,” he said.

About 400 people were expected at Henley Beach today for the event sponsored by the City of Charles Sturt council.

Beachgoer Ruby Van Leuven said she was visiting the beach for the “first time in ages”.

“It’s a really good thing that they’ve organised today … it was really good to have a try of these chairs,” she said.

Dignity Party MP Kelly Vincent said she was pushing for other parts of South Australia to take part.

“The Dignity Party has contacted every council with a beach in its area to lobby about this, and some are looking at taking this up as a result, which is really pleasing,” she said.