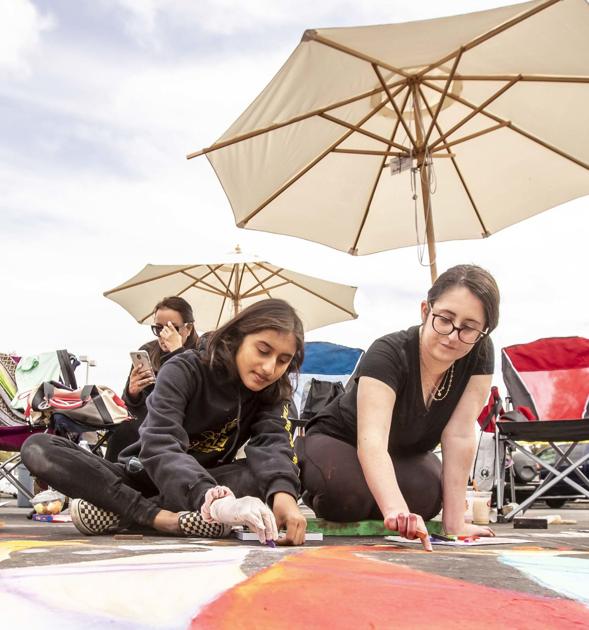 This has been a trying year for event organizers with many activities forced to cancel due to safety guidelines. So that’s all the more reason to celebrate the ones that can adapt to our current situation, like the Via Arte Italian Street Painting Festival, which returns to The Marketplace this weekend.

The annual event, put on by the Bakersfield Museum of Art, celebrates “the power of art and its ability to bring the community together,” said museum curator Rachel Magnus.

“Although we aren’t able to do it in the same scope, we think it’s really important to go on.”

About four months ago, the BMoA team began discussions with the Kern County Public Health Department to determine what would be required to make this outdoor event happen safely.

Magnus said, “We did not get final approval from the health department until four weeks ago but we were planning, hoping that we get that green light.”

This year’s festival has a few adjustments starting with the squares, all of which are the same dimension, 7 feet by 7 feet. Each will have a 10-foot parameter around it to allow distance between artists and attendees.

Attendees will enter the space through an entrance tent, with the flow of traffic directed one way along the space.

There will be 68 squares, with 103 artists participating. Past events have allowed teams of up to 10 to work on one piece but this year will consist of solo artists and teams of two.

Rather than bring in a featured artist from out of town, Magnus said the museum focused mostly on local talent for this year’s event with a mix of 70 percent returning artists and 30 percent new to the event.

New this year is Brandon Thompson, a full-time artist who is looking forward to his first time participating at the festival.

“This is a very nontraditional method of creating art, and I feel this brings most artists out of their comfort zone,” he wrote in an email. “I’m a street artist … so naturally, I enjoy getting down on the pavement and creating.”

The full-time artist said his work usually incorporates a number of styles but that he will be using a photorealistic approach this weekend to recreate an untitled color pencil drawing of his from this year.

Although there will be some distance between artists and observers, Thompson said he still wants to connect with the crowd and hopes to be able to inspire others through his work.

He wrote, “I want people to be inspired to go figure out what they’re really great at, and go do that forever! I especially hope to inspire that young man or woman that will see me working this weekend and picture themselves as a working artist when they get older!”

Usually the festival features student artists and offers Via Bambino squares for children and other attendees to work on. This year, visitors will be able to purchase a box of chalk ($15) in the exit tent to create their own squares at home. Those who participate are asked to shared photos of their creations on social media with the hashtag #bmoaviaarte.

Guests can also purchase masks based on designs from works in the museum’s permanent collection. The masks and chalk boxes were sponsored by SCOI (Southern California Orthopedic Institute).

In lieu of the usual awards, the festival will only name a people’s choice winner, selected by attendees who will scan a QR code and be able to vote by square number. Magnus said artists will make sure their square numbers are in view for people to note. (The winner will be announced Tuesday via the museum’s social media.)

During both days, there will be a cap on the number of people allowed in the festival at one time, set at 217, which includes artists, staff and attendees.

If there are any delays to get in, Magnus mentioned that there’s plenty to occupy your time at the shopping center including restaurants and shops.

Regardless of the changes, Thompson said he hopes the community comes out this weekend to support the long-running festival.

“Via Arte has been one of the premier arts and entertainment events in Bakersfield for over 20 years,” he wrote. “Despite COVID, the BMoA has still worked hard to ensure we can still have this event, so to everyone: Please come out and check out all of the beautiful art!”