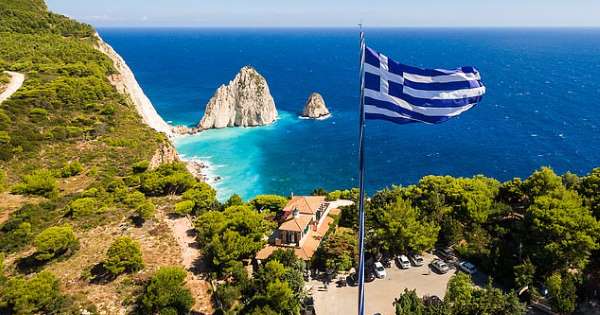 © ASSOCIATED PRESS
Tourists explore at Acropolis Hill, in Athens, Friday, July 31, 2020. Greece cautiously reopened its tourism industry, despite tough new coronavirus restrictions that came into force this week. Most of the new restrictions are unrelated to tourism. (AP Photo/Petros Giannakouris)

Up to 30 teenagers in Plymouth could be infected with coronavirus after returning from a holiday in Greece, the city’s council confirmed.

Plymouth’s public health team is dealing with a coronavirus outbreak that could involve up to 30 young people who returned from the Greek island Zante last week.

At least 11 members of the group, all around the ages of 18 and 19, have tested positive for the virus since returning from Greece, Plymouth City Council confirmed.

Greece is not currently included on the list of countries subject to the UK’s quarantine restrictions.

© Provided by Daily Mail
Up to 30 teenagers, aged 18 and 19, in Plymouth are involved in a coronavirus outbreak after the group returned from the Greek island Zante (above) last week


The city’s public health team said many of them had none, or ‘very minor’, symptoms and ‘carried on as normal’.

Plymouth’s director for public health Ruth Harrell said that some of the teenagers went gone on a ‘night out in Plymouth’s bars and restaurants’ before they were aware of the risk.

Speaking of the night out, she said: ‘That means more people could be infected. While young people might have fairly mild symptoms, and sometimes none that you would notice, our big concern is that we know it can be very serious for people who have existing health problems or are older.’

Download the Microsoft News app for full coverage of the crisis

What you can and can’t do as rules change (Mirror)

How to stay safe on a flight (The Independent)

She added that her team were working with national systems to contact and trace the young people thought to be affected, who are said to have been helpful and cooperative since being contacted.

Ms Harrell said: ‘We are in contact with all the pubs and bars across the city to remind them of their frontline role in stopping the spread of this virus.

‘They need to help us to protect the city. But it also needs everyone to help too.

‘If you think you’ve been in contact with someone who has tested positive, you need to self-isolate. If you get any symptoms, get tested as well as isolate. There’s no two ways round it.

‘While we are still below the point of triggering a lockdown, this incident just goes to show how easily life can change. We all need to remain vigilant, whatever age we are and take proper precautions.’

© Provided by Daily Mail
Eleven teenagers tested positive for Covid-19 since returning from Zante (above). Plymouth’s public health team are trying to contact and trace those who are thought to be affected


The total number of coronavirus cases in Plymouth rose by 11 on Tuesday, with just one new case being recorded on Wednesday, according to PlymouthLive.

Public Health England also confirmed that the UK saw a total of 1,048 new positive cases on Wednesday, bringing the total up to 328,846. Sixteen new deaths were also reported across the UK, making a total of 41,465.

Plymouth City Council leader Tudor Evans said: ‘This is our wake up call. We have been fortunate so far in Plymouth that we have had a low number of cases, but coronavirus has not gone away.’

Two venues have closed after being contacted by the NHS Track and Trace system, informing them that someone who had tested positive for coronavirus had come to the businesses, PlymouthLive reported.

It is not known whether the venue’s closures are in connection with the 11 young people who have tested positive for the virus.

The Mussel Inn, Wembury, took the precaution of closing after they were told someone who attended the pub on August 23 came down with the virus. It is unclear if it was a customer or member of staff.

The Flower Cafe tearooms also announced it was closing after being informed on Monday of a coronavirus case at the venue, according to PlymouthLive.

© Nicolas Economou/NurPhoto
Crowd of tourists at the popular and famous beach of Kalamitsi located on the southern tip of Sithonia peninsula in Chalkidiki in Northern Greece. People have fun at the beach in Greece as they are relaxing under the shadow of the umbrellas, snorkeling, scuba diving, swimming in the tropical exotic crystal clear clean waters, doing water sports, renting boats, having a drink at the beach bars or sunbathing on the golden sand and enjoying beach life under the sunny blue sky. There is a little island also located close to the shore.
The local government is adding new safety measures such as social distancing, changing the working hours, obligatory facemask usage etc against the spread of the Coronavirus Covid-19 Pandemic outbreak after relaxing the lockdown, travel and traffic ban, quarantine a few weeks ago, trying to relaunch the tourism season, but recently the number of cases began increasing in Greece, especially to locations near summer holiday destinations, resorts, beach bars, travel locations, night club party etc involving mostly tourists and younger people. The beachbars in Halkidiki infected a large number of people the previous days. August 14, 2020 – Halkidiki, Greece (Photo by Nicolas Economou/NurPhoto via Getty Images)


It comes after the Morley Arms in Plymstock, Plymouth, was facing a police investigation into licensing breaches at the beginning of the month.

Police were called to the popular pub at around 10.20pm on August 1 after reports of an assault on a member of the door staff, PlymouthLive said.

A Plymouth detective said the police log noted there was an estimated ‘150 people’ in the bar. There were also additional concerns of a potential designated premises supervisor (DPS) licence breach.

The detective told PlymouthLive at the time: ‘On the night an inspector did shut down the premises.

‘Officers from our licensing department and neighbourhood officers will now carry out further inquiries.’

The pub was also forced to apologise in July after scenes of a ‘rowdy crowd’ were shared on social media.

On August 3, the Morley Arms confirmed strict new rules, including not allowing under 21s into the pub on Saturday or anyone into the beer garden after 10pm.

Earlier this week, Plymouth council also confirmed a further and separate outbreak in a medical factory.

Four workers at a medical factory, which makes products critical in the fight against Covid-19, tested positive for coronavirus.

© Provided by Daily Mail
Two venues have closed after being contacted by the NHS Track and Trace System, but it is unknown whether the closures were linked with the 11 young people testing positive

The firm, whose sterile base is in Roborough, said it was a priority to ‘identify and notify’ everyone who was within close contact of the infected employees, PlymouthLive reported.

Anyone who came into contact with the staff went into self-isolation and arranged to have a coronavirus test.

BP said it had already enforced strict protocols across all of its facilities ‘to maximise the protections in place’ at the beginning of the pandemic.

It also added that the company follows official guidance from the UK Government and the U.S Centres for Disease Control and Prevention (CDC).

The Plymouth base makes urine and blood collection products, which are used in patient diagnosis and treatments worldwide.

A BD spokesperson confirmed the site remained open, but all areas where the infected staff workers underwent a deep clean.

Stay alert to stop coronavirus spreading – here is the latest government guidance. If you think you have the virus, don’t go to the GP or hospital, stay indoors and get advice online. Only call NHS 111 if you cannot cope with your symptoms at home; your condition gets worse; or your symptoms do not get better after seven days. In parts of Wales where 111 isn’t available, call NHS Direct on 0845 46 47. In Scotland anyone with symptoms is advised to self-isolate for seven days. In Northern Ireland, call your GP.

Investigators make ‘finding’ after mother was killed by speedboat