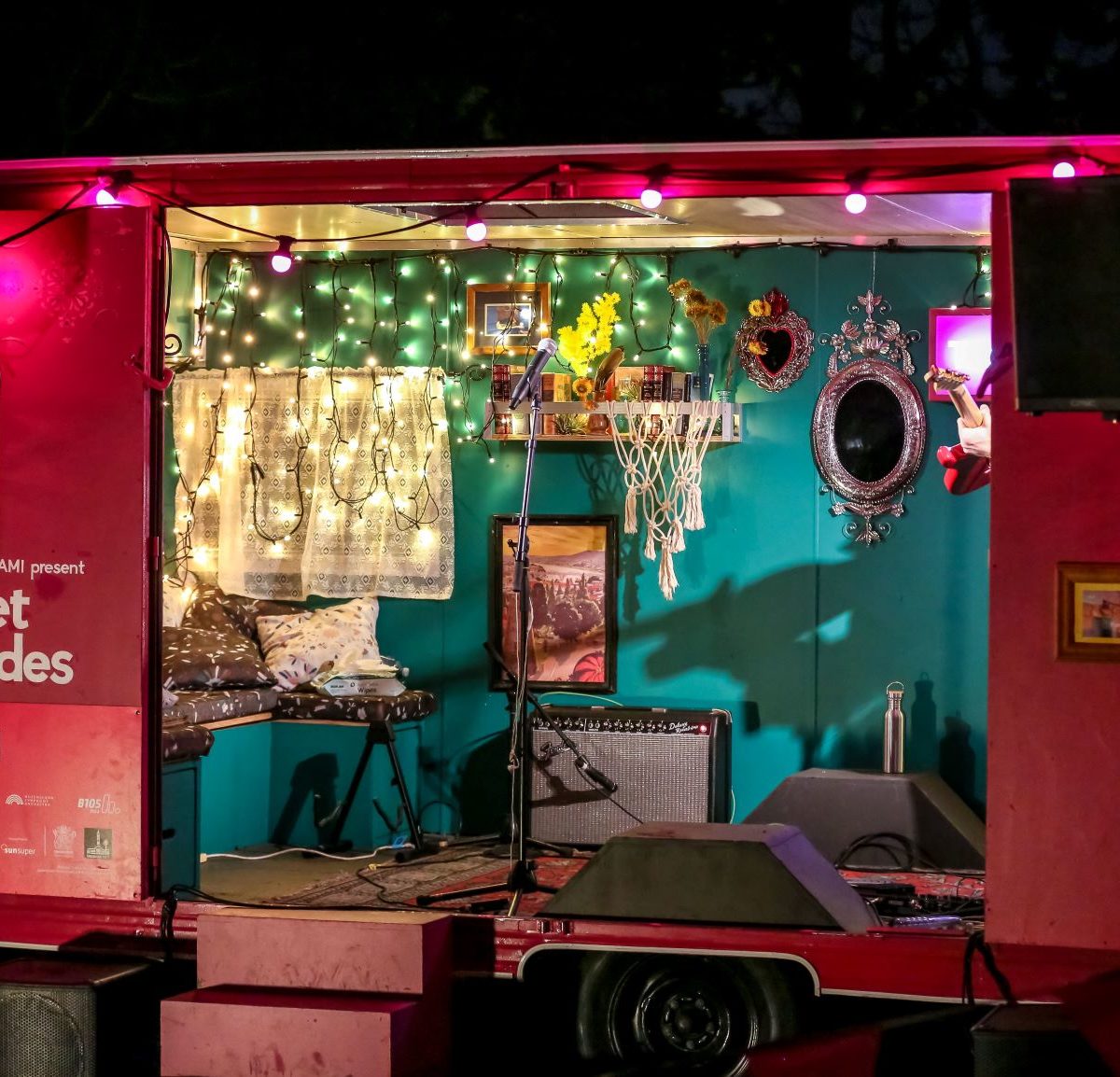 Queensland Conservatorium students have brought music to the streets of the city as part of a reimagined Brisbane Festival.

Griffith University is one of the partners behind the annual event – one of the highlights of the city’s arts and culture scene. This year’s festival is the first for new artistic director and Griffith creative arts alumnus Louise Bezzina.

Ms Bezzina was forced to think outside the box, reshaping the festival program to accommodate COVID restrictions.

One brainwave was the Street Serenades program, billed as the biggest deconstructed music concert in Brisbane’s history. It covered 190 suburbs, from concerts in cul-de-sacs and performances in the park.

As part of a program of pop-up performances across town, Queensland Conservatorium students performed at a series of secret locations on bespoke wheels, from flatbed trucks to retro caravans.

A host of small ensembles from the Queensland Conservatorium have entertained music lovers across the city for the past fortnight, from jazz duos to string quartets.

Clarinettist Drew Gilchrist performed at the Port of Brisbane and on the bayside with his wind ensemble, the Acetaria Quintet.

“It’s so good to be back in action, performing again,” he said.

“There is a real sense of excitement about returning to what we love and sharing music with the community.”

Drew formed the Acetaria Quintet two years ago as part of his studies at the Queensland Conservatorium.

“It’s like playing in a sports team – there is a real sense of connection,” he said.

“Just as valuable as the degree is the network of other musicians that you meet and collaborate with at the Con and the performance opportunities we are given really sets you up for your career.”

Violinist Scarlett Gallery performed a series of gigs on Brisbane’s northside with her string ensemble, the Serrano String Quartet.

“There was a real buzz getting back to live performance for the first time in months,” she said.

“I was thrilled to be part of the Brisbane Festival – it’s such a huge event across town, and we get the chance to play to such diverse crowds.

“This is what music is all about – bringing people together.”

As part of the Brisbane Festival, final year musical theatre students also got the chance to perform a show at Brisbane City Hall in front of a socially-distanced audience.

Musical theatre student Paul Roos said emotions were running high as the students took to the stage for their first major concert this year, performing hits from iconic shows including Les Miserables and Aladdin.

“It was an experience I’ll never forget – we looked out into the audience  and they were just weeping,” he said.

“People have been starved of live performance for so long, there were definitely heightened emotions.

“For us, it was amazing to be back on stage. This is all I want to do in my life – music is my passion.”

Queensland Conservatorium Deputy Director (Engagement) Associate Professor Peter Morris said the University’s partnership with Brisbane Festival had created an invaluable opportunity for students to share their music with the community.

“It is an opportunity for our students to play in a professional setting and try something outside their comfort zone,” he said.

“It is great experience to be part of a bigger event, and it’s so good to be sharing live performance with local audiences again.”