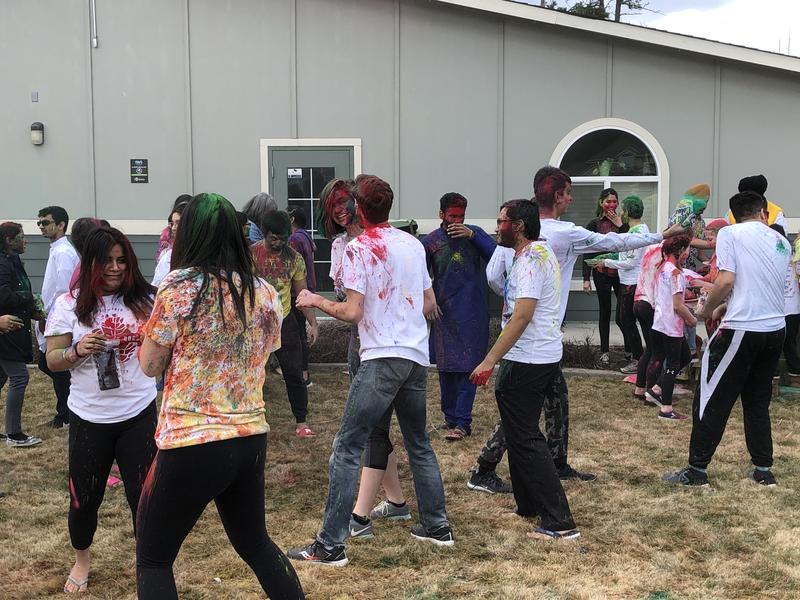 Members of Spokane’s Hindu Temple and Cultural Center shared one of Hinduism’s major celebrations on Sunday at Spokane’s Faith and Values Interfaith Center.

The Festival of Colors has a long religious history, but it has also morphed into something more contemporary.

The Hindus call this celebration Holi. Its roots are based in part on a good versus evil mythological story about a tyrannical king and his virtuous son.

“So we demonstrated a play today about the story about Holika and Prahlaad and Hiranyakashipu,” said Nishant Puri, the president of the Hindu Temple and Cultural Center.

The play was performed by some of the temple’s young members.

When the king assumed his throne, he became quite impossible. He thought he was immortal and he tried to crush all dissent. His son Prahlaad chose not to support his father and so the king moved to have his son killed. But the Hindu deity, Lord Vishnu, protected Prahlaad and the son eventually prevailed.

“The thing about the Indian civilization is that the religion and culture are so intermixed now. They’re so hard to separate out and say, ‘Oh, this is an exclusively religious or cultural thing,” Puri said.

Just as Christmas and Easter have become commercial as well as spiritual holidays in the U.S., Puri says Holi has become much more than a religious celebration in India and the other places where Hindus practice it.

“It’s more about being merry and enjoying and the weather changing, getting out in the open and celebrating colors. All the flowers are blooming. They’re throwing colors on each other and make it fun,” he said.

In fact, this part of Holi is quite messy. In India, Puri says people throw balloons or shoot squirt guns with colored water at each other. But it’s much warmer in India this time of year, so Spokane’s celebration was limited to dry paint.

“Grab some dry colors and put it on each other’s face or like throw it up in the air and each other’s clothes. It’s just fun,” he said.

The Holi festival is new to Spokane, as is the Hindu Temple and Cultural Center.

But Spokane has been home to a few Hindu families since the early 1980s. Aruna Bhuta says those families began meeting to preserve and practice their traditions.

“We started our journey together, meeting each month, fourth Saturday of the month, meeting at each other’s home and having prayer group. And that made a difference in our children’s lives,” Bhuta said. “But the group got bigger and bigger and it became difficult for us to continue at each other’s home. And here we are at this interfaith center. Welcome to all of you and let’s continue this tradition.”

Nishant Puri says the Hindu Temple and Cultural Center only recently earned non-profit status. It hopes to become a place where members of the local Hindu community can meet and support each other.