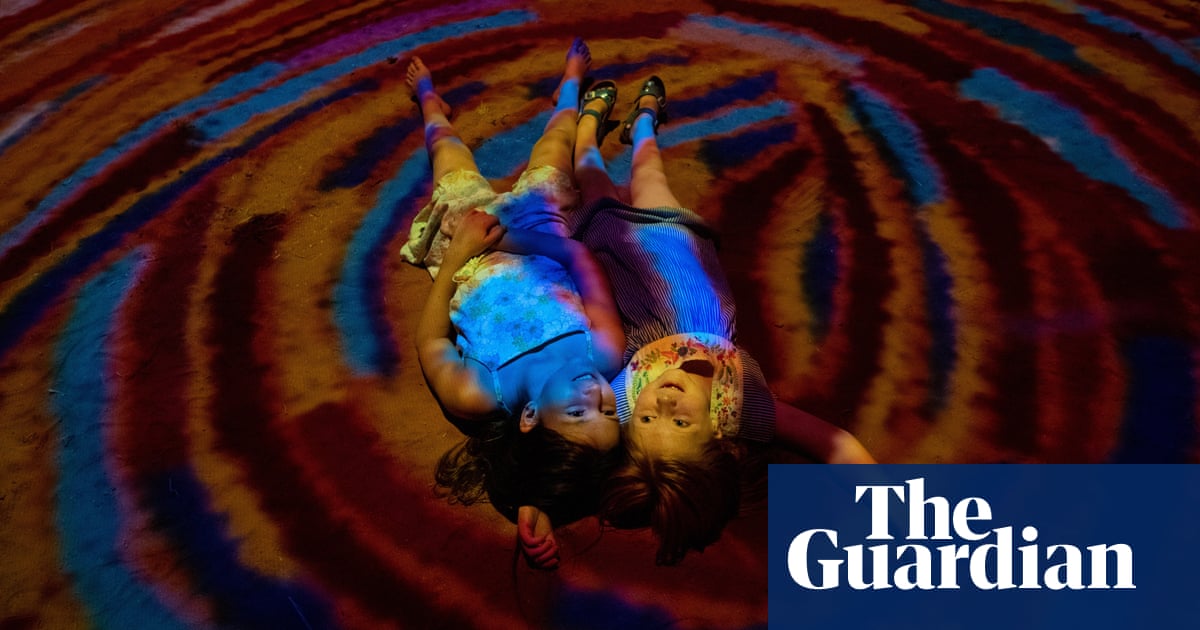 There was one moment during the opening night of Parrtjima festival at Alice Springs Desert Park that had curator Rhoda Roberts in tears.

Zaachariaha Fielding – a singer from Anangu Pitjantjatjara Yankunytjatjara (APY) lands, and half of pop duo and Eurovision hopefuls Electric Fields – stood on the stage bare chested in a sheer black cape and gold harem pants, as the sun set dramatically on the Macdonnell Ranges behind him.

But he wasn’t singing yet. Instead, it was the voice of Anangu lore woman, or minma, Ngilan sweeping over the silent crowd, singing a traditional inma about fire that had been recorded with permission in the small community of Mimili, South Australia, where Fielding was raised.

The vulnerability and power of the lone voice resonated off Yeperenye – and then the beats came in. Electric Fields producer and vocalist Michael Ross was layering the inma and looping it, turning an ancient, sacred song into driving modern electro before Fielding finally started singing it too.

“This is the new way to reawaken the inma,” she told Guardian Australia the next day. “This is tomorrow.”

Launched in 2016, Parrtjima festival is a free event that bills itself as the world’s only Indigenous festival of light. This year’s theme is “Future Kultcha”, celebrating the passage of knowledge from one generation to the next.

The event runs until 18 April and includes a program of films, talks, workshops and performances – but it revolves around light installations. Produced by the company behind Vivid Sydney, artworks from centres around Australia have been reimagined as interactive illuminated sculptures and projections, with a regular seven-minute light show that lights up two kilometres of the Ranges – also soundtracked by Electric Fields.

To bring the world’s oldest living continuous culture to a mainstream audience by mixing ancient storytelling with modern technology is, Roberts admits, an enormous undertaking. The potential for cultural missteps alone is mind-boggling. More than 40 arts centres from far-flung nations across the central desert region sent in work for consideration, and some of the pieces chosen tell sacred stories. The festival site, meanwhile, is on Arrernte land, and the traditional custodianship of it is shared by three different estates – Mparntwe, Antulye and Iripme – whose own protocols govern what stories can be told where, and by whom. In its first year, Parrtjima came under fire from three directions: according to various experts and elders, the Macdonnell Ranges projection threatened local wildlife, told the wrong dreaming for that area and shouldn’t have infiltrated sacred land at all.

Roberts started with the festival the following year, and made consultation her mission. Going forward, the projection would move to a different part of the ranges, and refrain from depicting specific dreaming stories. Most importantly, a Parrtjima reference group was launched, made up of people with connections to the three estate groups who offer cultural oversight.

“How fortunate I’ve been that lore people here, and in the Kimberley, and in Mount Druitt – everywhere – that people trust me with their work,” says Roberts, a Bundjalung woman who until this year was head of Indigenous programming at the Sydney Opera House. “That is an extraordinary responsibility to carry – and then to make it work in a western sense as well.”

She “makes mistakes all the time”, she says, but is always learning and listening. “We often see in our institutions non-Indigenous people talking for us, not with us … I will never do that. I will always make sure I’m side by side with those artists.”

After Electric Fields played on opening night, kids were running through the five installations that lit up a small section of the park. For “Harvesting Kultcha”, sensor pads – when stomped on – light up larger-than-life honey ants emerging from a 3D anthill illuminated with My Hunting Country, a painting by Yvonne Ngarraye Bonney.

In another section, “Grounded Kultcha”, seven works from four art centres have been animated and projected on the ground: you can chase a snake through the painting Wanampi Tjukurrpa by Francis Marshall, or hop between growing and shrinking circles in Nora Nyutjangka Davidson’s piece Multju. These works are playfully soundtracked by young producer Dobby.

Before each loop of projections, Central Arrente elder Benedict Stevens welcomes the art from around Australia to be projected onto his country.

“Often [non-Indigenous] Australians have this different view of who we are. They’re terrified of us, they think of all our men as perpetrators, they consider us to be self-medicating all the time,” Roberts says. “But children have no prejudices.” She hopes their memory of Parrtjima – perhaps many white kids’ first experience with Aboriginal Australia – will be “one of pure joy”.

Last night, the Indigenous kids weren’t being chased; they were being applauded. They never get that.

First Nations people make up 18% of the Alice Springs population – a much higher percentage than the major cities whose residents the Northern Territory is courting, now that interstate borders have opened. “How many Australians have walked side by side through an entire festival surrounded by Aboriginal people?” Roberts asks. “It’s a bit like, you want to have a ‘first contact’? Come to Parrtjima,” she laughs, “because we will look after you.”

Roberts hopes the event will have a deep impact on local Indigenous children too. “I see the families coming in from homelands or fringe camps with their kids and the kids are laughing, and no one’s giving them a look like they’re going to steal something … Last night, they weren’t being chased; they were being applauded. They never get that. They never get told [by white Australia] that they are loved and part of society.”

A ‘disastrous year’ for Indigenous art

Another focal point of this year’s festival is the artwork Crossroads by emerging artist Chantelle Mulladad, who works 85km east of Alice Springs at the Keringke Arts Centre in Ltyentye Apurte (Santa Teresa). Mulladad’s painting adorns five three-metre camels made of glass mosaics lit from above, which cast colourful shadows on the red sand below.

The installation represents the Middle Eastern cameleers who forged the first trade route from the top to the bottom of Australia from the 1860s, connecting far-flung Indigenous communities and marrying into them. (“You don’t get a name like Mulladad unless you’ve got a Ghan history,” Roberts said on opening night.)

In a festival partnership, the pattern has also been wrapped around three carriages of the Ghan: a luxury 900m train that travels from Darwin to Adelaide, tracing a similar route across Australia to that of those early cameleers.

The deal came at a good time – not just for the artist, but for the small remote arts centre which represents her. It’s been a “disastrous year” for Keringke Arts Centre, says manager Bryce Hartnett, with the pandemic halting tourism and dramatically decreasing sales. According to a February 2021 report by industry body DesArt, the number of artworks sold in Northern Territory art centres fell almost 25% year on year in 2020, making it the hardest hit state in Australia.

Keringke Arts has eight full-time artists with around 40 other women painting off-site. Hartnett estimates his centre supports around 10% of the community, with the artists taking 60-70% in sales and licensing of their work. The downturn has had a devastating impact on Santa Teresa. “These artists support their whole family,” he says. “It hurts.”

“It’s not only that, but we’re losing artists. They weren’t making any money, so they’d go somewhere else,” Hartnett continues. Two artists have moved on from Keringke. “They’re both elderly and senior – that’s a huge loss of knowledge.”

Parrtjima, then, brought not only a welcome licensing fee, but unprecedented exposure. Keringke picked up more than 100 Instagram followers in a couple of days, Hartnett says, and has made more online sales in one weekend than in the 18 months that preceded it.

For Mulladad, having her work re-imagined on such a huge scale was thrilling. “My heart was beating so fast,” she told the Guardian on Thursday. Her phone, Hartnett says, has been ringing non-stop since.

‘Guilt is such a wasted emotion. This is an opportunity for joy’

Projecting light across the Macdonnell Ranges was a particular challenge this year due to a very welcome, but very wet, wet season. It changed the red canvas to a green one. “Those really bold colours that people who have been to Parrtjima in previous years – we can’t do it this year,” Roberts says.

But watching lights paint a mountain still makes for a powerful show. Set to Electric Fields’s unreleased song Lore Woman, Fielding’s lyrics switch between English, Pitjantjatjara and Yankunytjatjara (which he often attempts to teach to the audience in live shows). As the lights dance, spoken voiceovers also teach cultural concepts such as the lore woman, and the kinship system.

“I think the most important thing about whatever installations we do – whatever workshops, whatever talks – is that they’re getting to know us on a one-on-one basis, a very personal basis,” Roberts says. “And when you get that, it readjusts your thinking.

“Yes they kidnapped our children. Yes they put us into slavery. Yes they massacred our men. Yes they cut off their dicks and sent them to London … all in the voice of the ‘civilised’ world. But we forgive them, because we have to move on.

“We don’t want guilt. That’s just such a wasted emotion. This festival is an opportunity for embracing joy. All we want is: come and understand the fragility of the land that we have looked after, and continue its stewardship with us … Because when you do know the story of that tree, or that rock,” she says, gesturing to the park around us, “you look at it in a totally different way.”

Parrtjima festival continues until 18 April at Alice Springs Desert Park. It is a free event, but pre-registrations are encouraged for Covid safety

The Sonic Extremes of the MaerzMusik Festival