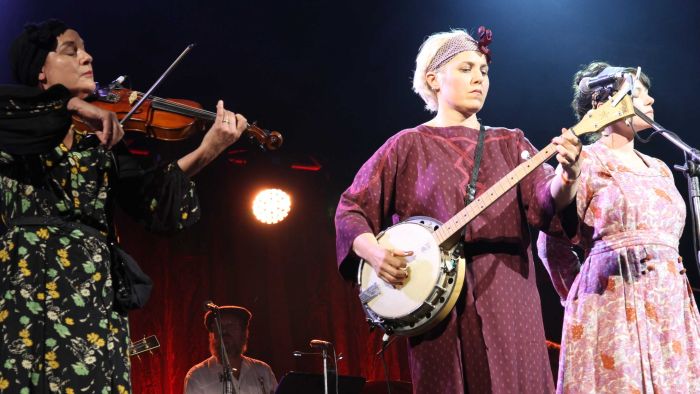 The event usually takes place on the second weekend of March and draws up to 30,000 people to the tiny south-west Victorian town which hosts a population of around 3,000.

Committee president John Young said the organisers had been working on organising the 45th Folkie since the last one in March.

But he said that as the second wave of COVID-19 hit the state, it became apparent restrictions around social distancing and capacity were likely to still be in effect in March next year.

“We started looking at options for smaller festivals … [but] we thought that was going to be very, very difficult to handle,” Mr Young said.

“Front and foremost was our concern that we did not want to bring people to Port Fairy that potentially could put our community and the people that work and play at the festival at some sort of risk.”

The town has remained relatively untouched by COVID-19, despite a family from Melbourne testing positive immediately after holidaying in the popular tourist destination in July.

The 2020 Folkie was one of the last major festivals to run in Victoria before the introduction of coronavirus restrictions on mass gatherings.

“We escaped any issues with the 2020 festival back last March and thankfully emerged from that with nobody being infected by coronavirus,” Mr Young said.

The Folk Festival brings an estimated $10 million to the local economy each year and is seen as one of Australia’s premier music festivals.

“If something did lighten up and there were less restrictions in March next year we may be able to do something, but we can’t look at that just yet,” he said.

He said organisers had toyed with the idea of featuring all-Australian acts.

On the plus side, the organisers have plenty of time to prepare for the 45th festival in 2022.

“It gives us a good timeline to work [with] to get a very, very good program in place,” he said.