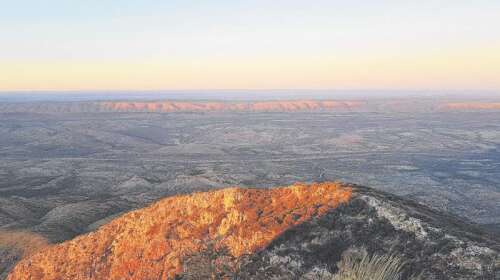 Day 5 of our Larapinta trek began early — at 3am. As on the preceding mornings, but at a much more civilised hour, wakeup music was broadcast over the sound system to gently rouse us from our super-comfy camp stretchers.

We had 30 minutes to dress, grab a hot drink and snacks from the camp kitchen and gather our things for the pre-dawn, 8km walk up Mt Sonder, to see the sunrise.

Mt Sonder (known as Rutjupma in the Aboriginal language), at 1380m is the fourth highest peak in the Northern Territory. It was formed from quartzite rock some 350 million years ago, and is the traditional start, or finish, to the Larapinta trail. Anticipation had been building up to this ‘peak’ experience all week. The forecast was for yet another perfect trekking day — cool, clear and calm.

A 10-minute bus ride over a very bumpy track brought us to the start of the mountain trail at Redbank Gorge. Still dazed from the early start, we lurched from the bus, donned all our gear, and with one guide at the front and the other at the rear, crossed a dry river-bed and almost immediately started to climb.

Anyone who has walked in pitch darkness guided only by a headlamp will know what a surreal sensation it is. Even though I knew we were really only walking at a moderate pace, there was a gratifying illusion of speed created by the rapidly disappearing heels of the hiker ahead and the all-encompassing black void outside the beam of torchlight.

Later in bright sunshine on the way down the mountain we marvelled at how far and how steeply we had come, how narrow and alarmingly close to a steep face the track was, in places, and how seemingly easy our ascent had been.

‘The constellations were just were just arm’s length away’

As dawn approached — by then we’d been walking steadily uphill for nearly three hours — a tiny orange glow silhouetted the hills to our left, and with a rush of excitement I realised we were getting close to the summit. The sky on the horizon changed from deep purple to orange then a pale golden yellow. We passed the 7km marker, and the surrounding rocks and vegetation materialised.

Spurred on by the sound of voices ahead and the thought of bliss balls and the thermos of coffee obligingly carried by our guides Cat and Matt, we finally emerged from the low-lying scrub onto the rocky plateau at the top of Mt Sonder.

Already a dozen or more people from other tours had congregated and were milling around, chatting and taking photos. Then, sipping on a very welcome hot drink, we momentarily fell silent to watch the sun rise, which was followed by whistles and cheers. The various hues and contours of the magnificent landscape below unfolded and we spent half an hour taking it all in.

After a brief sit down and a caffeine and sugar hit we were ready to go again. Now we could see the vast glory of the Australian Outback stretching far into the hazy distance.

By 11am we were all back safe and sound, although weary, at Camp Fearless. A couple of us were nursing sore knees but the rest were just a bit sleep-deprived. The lovely Shelby had stayed behind to cook us all a fabulous brunch including delicious barbecued courgette and haloumi fritters, which went down well with a couple of ciders.

There was nothing else for it but to sleep this off which most of us did, emerging later in the afternoon in time for pre-dinner drinks. Around the campfire we contentedly swapped stories, mindful that the next day was our last on the trek.

That night was my final chance to sleep under the stars having heard all week from our guides and some of the other trekkers how beautiful the night sky is so far away from the lights of civilisation.

Ignoring my husband’s teasing attempts to put me off with jokes about creepy crawlies, I dragged my stretcher and swag just outside the tent, wearing every warm item of clothing I possessed. The velvet darkness descended and it became icy cold. The silence of the bush was profound and the constellations were just arm’s length away. It was very late by the time I finally closed my eyes to sleep.

MAJESTIC: The stunning panorama from the top of Mt Sonder. Pictures by Jan Clare unless otherwise stated

The rocky trail near the summit of Mt Sonder.

View of the country below.

A spectacular sunrise from the top of Mt Sonder.

Jan (third from right at back) and her hiking group on the summit of Mt Sonder.

On the last night, Jan took her swag outside to sleep under the stars.

Camp Fearless and the night sky. Picture by Yana Nan