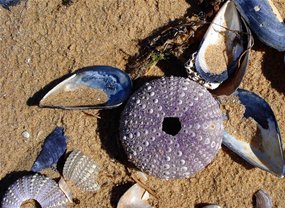 Amidst the relentless pounding of the waves and the ebb and flow of the tides, the seashore teems with life. Take a walk with us and discover the flora and fauna along Australia’s beaches in part one of our two-part beachcombing guide.

The intertidal zone offers a world of discoveries for beachcombers. (Source: Lorraine Phelan/Flickr)

From mangrove-filled estuaries to tidal bays and sandy beaches, Australia’s lengthy coastline is home to a rich diversity of plants and animals.

The most abundant life on the shore is found in the intertidal zone, a fairly narrow strip of land that is covered by high tides and exposed during low tides.

Surf crabs, pipis and cockles, and tiny amphipod and isopod crustaceans are all found in the surf zone of sandy beaches, while further up the intertidal zone sand fleas live among rotting seaweed along with dozens of crab species.

During the day, small almost translucent, ghost crabs stay in their burrows, which can be more than a metre deep and over 100 metres from the sea, only emerging at dusk to hunt.

Meanwhile, armies of soldier crabs march across tidal mudflats at low tide, quickly corkscrewing into the mud if disturbed.

Foraging along the high tide anywhere along the temperate coastline will yield other flotsam and jetsam like bluebottles still trailing metres of stinging tentacles, sea urchins whose spines have all broken off and cuttlebones, the air-filled internal shells of cuttlefish that in the living animal act as both a backbone and help with buoyancy control.

The frilled brown egg cases from Port Jackson sharks are also a common sight, as are sponges, which may be fan, cup, or tube-shaped.

Even though their living colours have faded, the sponge’s skeleton survives being tumbled in the surf reasonably well and keeps its shape long after death.

When: Summer provides great conditions for exploring the shoreline

When: The intertidal zone. Scientists divide the Australian coastline into tropical and temperate zones. On the east coast the two zones meet around Fraser Island, Queensland, and the west coast they meet around Shark Bay, Western Australia.

Seashells by the seashore

The most common finds, however, are shells of marine molluscs.

“In the temperate southern beaches you might find one pipi species, but in the tropics you can find five living in the same area.”

Pipis live in the surf zone, anchoring themselves into place with a spade-like foot that is plunged down into the sand.

The different species look similar, Beechey adds, but each one occupies a slightly different niche.

In warmer waters beachcombers can also find spider shells — thick, conical shells with a flared outer lip and a notch where the animal’s eye protrudes when it is in residence.

They range in size from a few centimetres to 26 centimetres and are a beachcomber’s prize, as are colourful cowrie shells, and the brown and cream-checked helmet shells.

The fluted coils of wentletraps were so sought after when they were first found in the 1700s that enterprising merchants started making paper mache copies to sell to avid collectors; today they are known to be quite common and are found in a symbiotic relationship with sea anemones, living at their base and eating their leftovers.

Cone shells, or cone snails, are also a common find although all species are toxic and some are extremely dangerous to humans.

Seen mostly in warmer waters, these predatory gastropods should be handled with extreme caution — or left alone altogether, even after they have washed up on the beach.

“Most of the shells that wash up, even after cyclones or storms, tend to live at depths of less than 20 metres,” says Beechey. “Below that depth, wave action doesn’t have much effect.”

Tropical beachcombers may also encounter mangrove propagules, which are mangrove seedlings cast adrift from the main tree, and nesting sea turtles at this time of year.

Australia is home to six of the world’s seven species and they nest right across the tropical north, from the loggerheads and leatherbacks that are found in the slightly cooler waters around Bundaberg to the greens, hawksbills and flatbacks found up along Cape York around to the west coast.

“Although we hear less about them, the west coast of Cape York has a lot of turtles, especially Olive Ridleys which come ashore around Weipa,” says turtle rehabilitator and James Cook University postgraduate student Jennifer Gilbert.

“However, turtle nesting season which runs from November to February also brings other less desirable animals to the beach, including goannas, dingoes and feral pigs. Three years ago pigs destroyed all turtle eggs along a coastal stretch of western Cape York beach.”

With the warmer weather crocodiles are also on the move in northern Australia as they search for new territories, and are frequently found on beaches and the waterfront.

Beachcombing at a glance 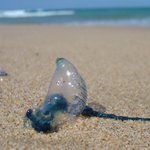 Belonging to the same group as jellyfish, bluebottles, which are also known as Portuguese man-o’-war, drift across the ocean, using their gas- filled float as a sail, and are occasionally blown ashore in summer’s warmer months. They trail tentacles that are up to three metres long and packed with stinging cells that catch small fish and plankton — and the occasional body surfer. They are not a single animal, rather each bluebottle is a colony of individuals called zooids that are specialised for different tasks, and even on land can give a nasty sting. 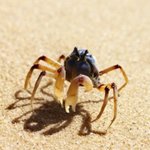 Soldier crabs are found along the east coast from Northern Queensland to Wilsons Promontory in Victoria. Appearing seemingly from nowhere, the crabs, which are only 15 millimetres-wide, they march in their thousands across tidal mudflats at low tide. They burrow rapidly into the mud if disturbed, and leave a neat pile of small muddy balls at the burrow entrance. 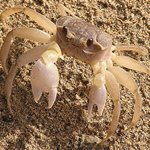 Ghost crabs are small, almost translucent crustaceans that live in tropical waters, from the Kimberley in Western Australia, across the top end and as far south as Sydney. During the day they stay in their burrows, which can be more than a metre deep and over 100 metres from the sea, and emerginge at dusk to scuttle down to the water to hunt. 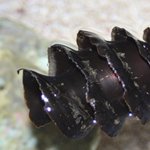 Port Jackson sharks usually breed in late winter and early spring, when the females wedge the soft spiral shaped egg cases into rock crevices where they remain until the juvenile shark emerges ten to twelve months later. Once vacated, the eggs become dislodged and wash up on beaches. Crested horn sharks (Heterodontus galeatus) produce similar-looking egg cases, however these also have long twisted tendrils at the bottom which are often attached to seaweed to keep the egg in place while the young shark develops inside. 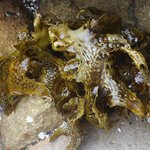 Southern Australia’s rocky coast is home to a large number of seaweeds that are often found washed up on beaches and rock platforms. Along with bubble weed, leather kelp and bull kelp are among the most common finds. Scientists have also recently discovered that barnacles, sea stars and other marine invertebrates raft from place to place — often covering huge distances, on clumps of kelp, often covering huge distances, helping to explain how new species suddenly appear on islands and other uninhabited coastal environments. 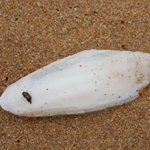 Related to squid and octopus, several species of cuttlefish live in temperate waters off southern Australia. When they die their lightweight white, internal shells are washed ashore. They, and range in size from the five centimetrem shell of the elongated cuttle, to the up-to-40 centimetre long shell of the giant cuttle. 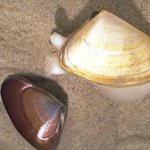 These bivalve molluscs live in the surf zone, anchoring themselves in place with a spade-like foot that is plunged down in to the sand. They are filter feeders, passing water through their gills and extracting plankton. When they die, the ligament holding the shell together breaks down and the shells wash up on the beach. 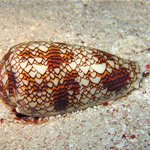 Also known as cone snails, these venomous gastropods are renowned for having brightly-coloured shells. Ranging in size from 2.5 to 20 centimetres, they use harpoon-like barbs to inject prey with venom. Seen mostly in warmer waters, they should be handled with extreme caution — or left alone altogether. 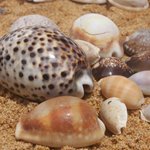 Highly prized by shell collectors since ancient times, about two-thirds of cowry species occur in the tropics and sub-tropics on coral reefs, sheltering under coral outcrops or in crevices during the day and feeding on algae, sponges, dead organic matter and other molluscs at night. When they are alive the cowrie’s mantle covers the outside of the shell keeping it glossy.

Use these social-bookmarking links to share On the beach.

Welcome to no wear