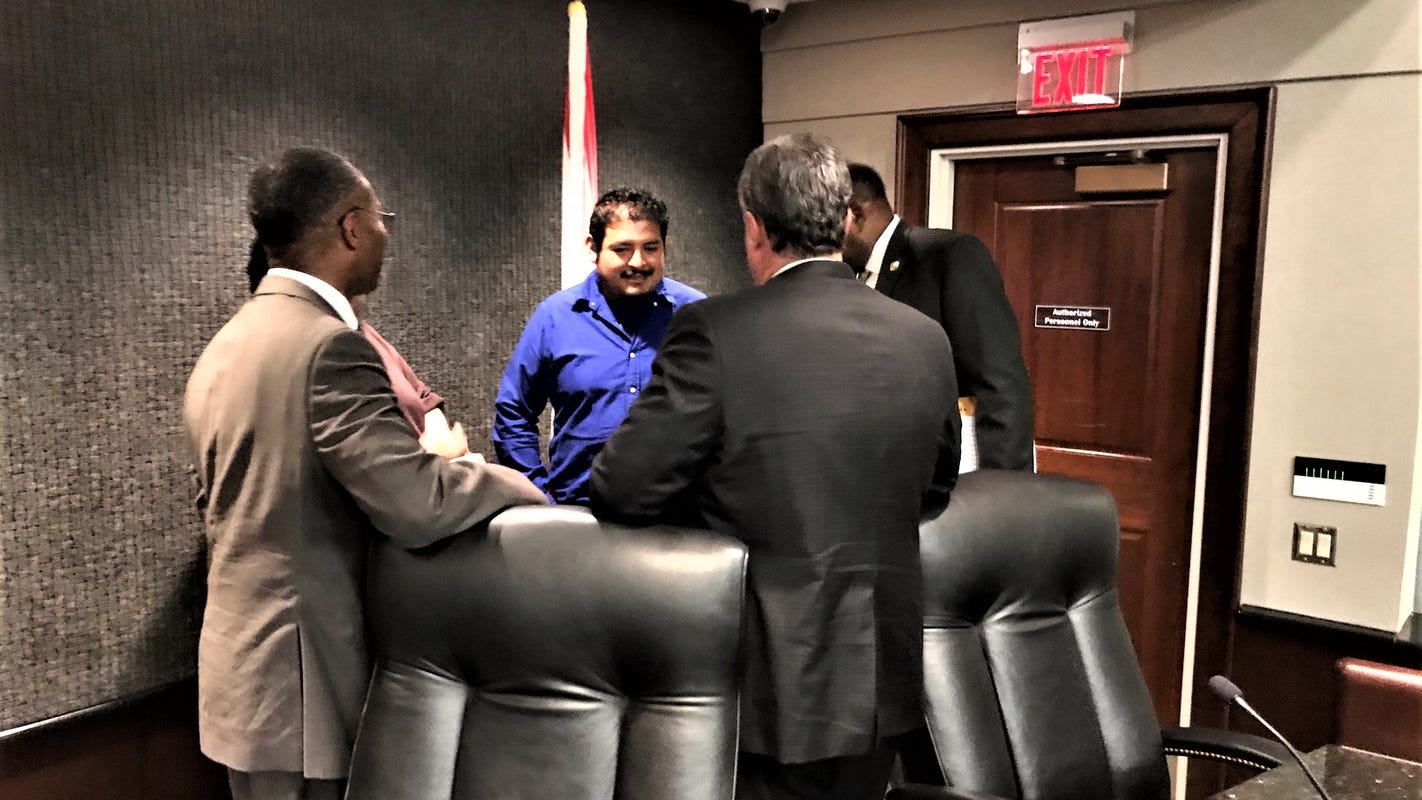 James Brown talks with County Commissioners after the liquor license for the Latino festival was approved (Photo: Sara MacNeil)

James Brown, who is hosting a Latino festival in rural Montgomery County, said he nearly cried tears of joy after the Montgomery County Commission approved a liquor license for his event Tuesday night.

The March 21 festival will feature a concert from Los Huracanes del Norte, one of the most famous bands in the traditional Norteño genre of music.

“I feel like crying because we finally got this,” Brown said. “We’ve been arguing for this for awhile.”

After at least five residents of the Snowdoun neighborhood opposed the liquor license, the County Commission voted 4-1 to approve the license.

Phyllis Roberts spoke on behalf of the Snowdoun community, complaining the event caused safety/traffic issues and was too big for the small, quiet neighborhood. Roberts also gave the County Commission a lecture about the purpose of laws and the justice system.

“We as citizens ask that you look at the justice system . . . that entitles us to peace, respect and to be treated fairly and justly,” Roberts said.

Snowdoun resident Buddy Wilburn, 61, was concerned about whether festival organizers would pay taxes on the revenue they made.

“I want to know where the tax money that these people make off of . . . we have no accountability for what they’re making off that property,” Wilburn said.

Commissioner Dan Harris told the Advertiser it didn’t make sense that those who moved to a rural area would complain about what festival organizers were doing on their own property. Commissioner Ronda Walker voted for the liquor license saying it’s better than people bringing in their own alcohol to the event.

Commissioner Doug Singleton said festival organizers have been cooperative about accommodating the neighborhood. But, Singleton voted against the liquor license saying he listened to his constituents.

Since July, the Snowdoun community has complained about the Latino festivals at 1890 Snowdoun Chambers Road. Residents said the event was a safety hazard, noise nuisance and the land its on is zoned for agriculture, not business.

Neighbors weren’t Brown’s only obstacle. The city tried to shut down the Latino festival filing a lawsuit Oct. 19, 2019 against Brown and his business partner Edgar Valerio.

“Beginning in July 2019 and most recently on August 11, 2019, defendants have been hosting, sponsoring, promoting and/or operating commercial events on the subject property in violation of the City’s zoning ordinance and other local laws and regulations,” the lawsuit reads.

Edgar Valerio talks to County Commissioners after the liquor license for the Latino festival was approved. (Photo: Sara MacNeil)

The festival’s location is not within city limits, but it is within police jurisdiction. The property is zoned for agricultural, not commercial use. Brown said he tried to get the property zoned for commercial through the city, but his request was denied.

So, Brown bought additional land adjacent to his property and outside police jurisdiction and physically moved the location of the festival to the expanded portion of the property. The festival was no longer within police jurisdiction. Brown also hired a sound engineer and security guards to accommodate the Snowdoun neighborhood that complained about safety issues and noise.

“We want to be part of that community as well. We live there too,” Brown said.

Brown told the Advertiser people in the Latino community were scared to attend the festival after a public hearing. He said some don’t understand the legal process.

“Anytime you say the word ‘hearing’ it’s going to scare them,” he said.

Edgar Valerio with three Snowdoun residents who came to oppose the liquor license for the Latino festival after a County Commission meeting (Photo: Sara MacNeil)