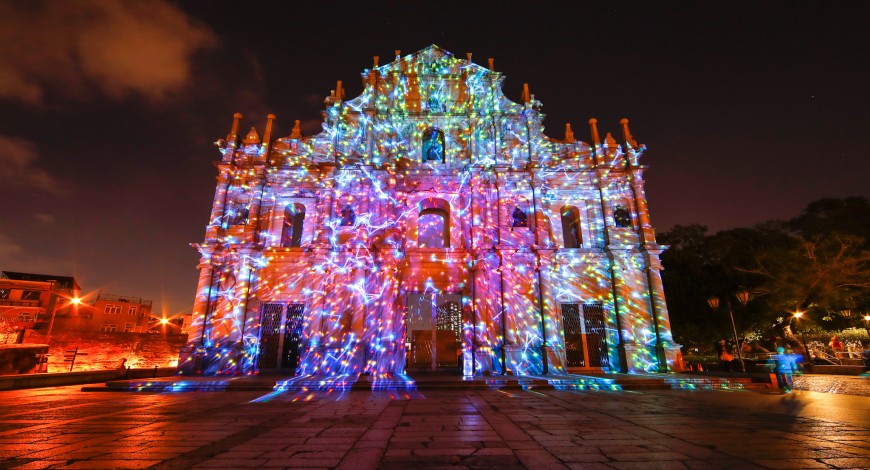 This year’s Macao Light Festival will showcase the rich culture and urban charm of Macao, while demonstrating the city is a safe place to visit during the COVID-19 pandemic.

Organized by Macao Government Tourism Office (MGTO) and co-organized by Municipal Affairs Bureau, Cultural Affairs Bureau and Sports Bureau, Macao Light Festival 2020 will brighten up the city with colourful lights and carnival elements every night between 7 p.m. and 10 p.m. from 26 September to 31 October 2020.

Held for the 6 consecutive years, this year’s Macao Light Festival will showcase the rich culture and urban charm of Macao, while demonstrating the city is a safe place to visit during the COVID-19 pandemic.

Furthermore, the festival will also highlight the beauty of the World Heritage architecture Macao possesses, the characteristics that distinguish the various communities that make up the city, and manifestations of the status of Macao as a UNESCO Creative City of Gastronomy.

Among the highlights of the festival are the projection mapping shows, with projections at heritage buildings in Tap Seac Square featuring as one of the main spots this year. The shows will also “paint” once again the façades of the Macau Yat Yuen Canidrome, formerly a dog racing track; and the Cozinha Pinocchio restaurant at Largo dos Bombeiros in Taipa Village, along with two other new sites on this edition, namely the China Products Company building in Hong Kung Temple Square and the Wong Ieng Kuan Library in Areia Preta Urban Park.

In addition to video mapping shows, different spots along the Nam Van Lake Nautical Centre, Anim’Arte NAM VAN, the Leisure Area at Rua do General Ivens Ferraz in Fai Chi Kei, Taipa Village, and several other locations in the different parishes of the city, are among the 12 sites forming the network of routes for this year’s festival, featuring light installations and interactive games. Along the routes are spots to take selfies and check in on social media.

Commenting on the same, Mr. Arzan Khambatta, Head- Macao Government Tourism Office (MGTO) India said, “Since its inception, the Macao Light Festival has been a huge hit amongst both tourists and residents. With an aim of narrating Macao’s diverse culture and attractions through merging the art of light with technology, we are excited to announce the sixth edition of Macao Light Festival featuring the unique architecture, rich history & culture.”

The Light Mapping will successively come into the spotlight with all necessary precautionary measures such as, temperature check, mandatory wearing of face mask, proper sanitization etc. and will be covering 15 locations across four districts.

In 2015, MGTO launched the first edition of the Macao Light Festival which is held annually at various locations in Macao Peninsula and on the Islands. The event aims to draw visitors to different districts of the city for an appreciation of Macao by night and to learn about the local culture and history from innovative angles shaped by light artistry.

The iHeartRadio Music Festival is 10 this weekend