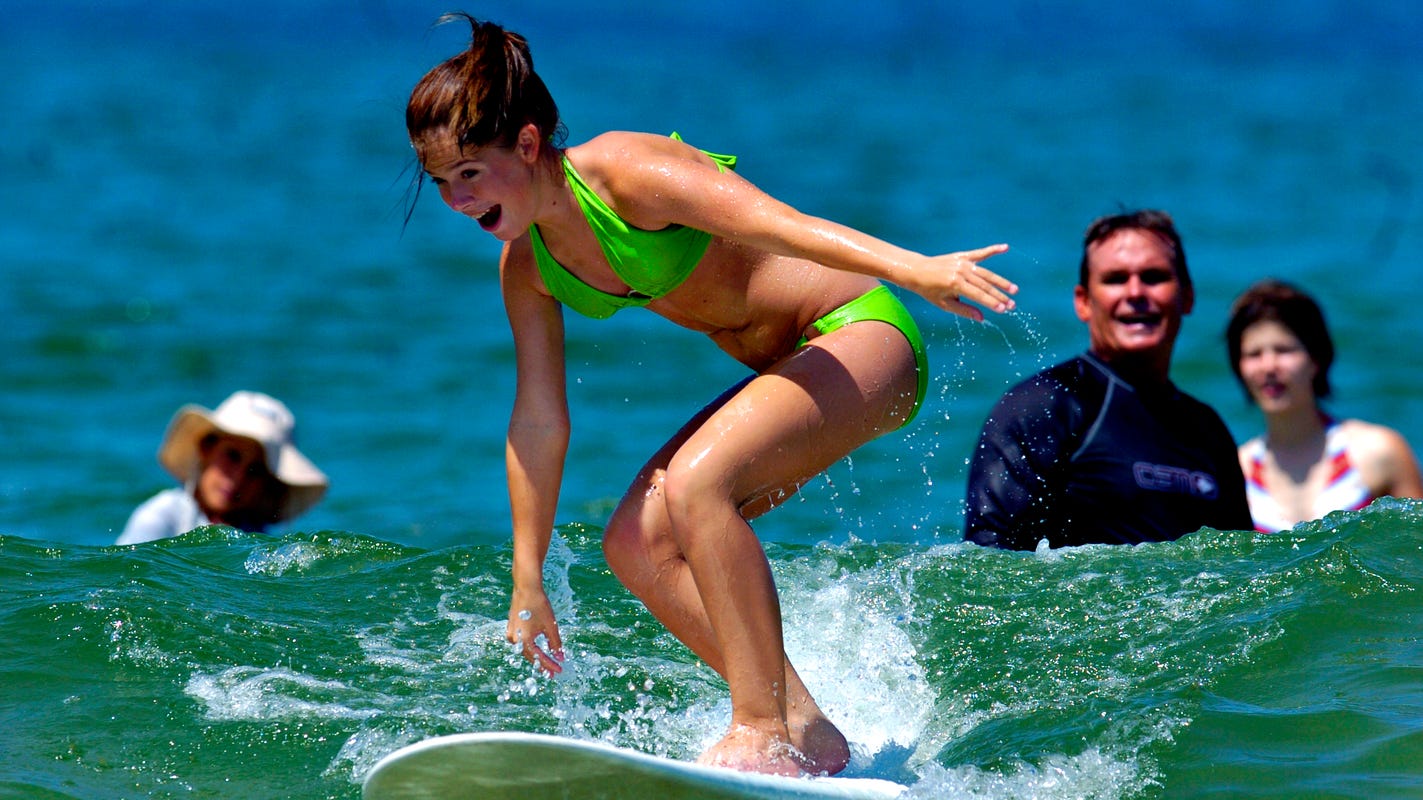 “I’m a surfer, not a businessman,” says Charles Williams, of Fort Pierce, who has been building Impact surfboards since the mid-1970s and stays afloat by marketing his boards at the beach.

Florida isn’t a world-renowned surfing destination like Hawaii, Australia or California, but it’s the perfect place for beginners.

If you want to avoid crowded locations with experienced surfers at the Sebastian Inlet and Fort Pierce Inlet state parks, the Treasure Coast has at least six great spots for beginning surfers.

Courtney Beal, 15, of Hiram, GA, rides a wave in under the instruction of the Rev. Edward Fredryk (back right) at Fort Pierce Inlet State Park on July 6, 2005. Beal and a group of volunteers with World Changers took advantage of one day off from rebuilding homes to learn how to surf. (Photo: Alison Sidlo, ALISON SIDLO/TCPALM)

Bruce “Spunky” Strunk, who sold his longtime Fort Pierce surf shop and retired in 2019, has been surfing locally since 1971.

He suggested Pepper Park because it has a series of sandbars that creates a casual break. The beach’s outer shoals prevent waves from getting too big.

“It’s a much better small-wave break to accommodate entry-level surfers,” Strunk said. “You want a little bit of a wave that breaks along the sandbar as opposed to just sucking out and closing out all at once.”

Plus, Pepper Park, which is across the street from a fire station, has lifeguards. They watch for bad weather conditions, marine life like sharks and Portugese man-of-war, and rip currents.

“You’ve got the security of knowing if anything ever happens,” Strunk said, “you’re in good hands.”

Dozens of surfers took the sea to ride waves churned up by Hurricane Humberto on Monday, Sept. 16, 2019, at Fort Pierce Inlet State Park. The hurricane, located a couple hundred miles offshore, produced big swells along the Southeast coast of the United States and attracted surfers from around Florida to the state park.  (Photo: LEAH VOSS/TCPALM)

Strunk warned there’s no outside barrier reef to break down the waves when the swell gets big, but the beach typically has a soft wave during the summer. Plus, it has lifeguards.

One additional benefit to surfers is that no fishing is allowed at this public beach access.

“It’s just one of those nice, off-the-beaten-track waves where you won’t find a lot of people,” Strunk said.

Dozens of surfers took the sea to ride waves churned up by Hurricane Humberto on Monday, Sept. 16, 2019, at Fort Pierce Inlet State Park. The hurricane, located a couple hundred miles offshore, produced big swells along the Southeast coast of the United States and attracted surfers from around Florida to the state park.  (Photo: LEAH VOSS/TCPALM)

Avalon is a good beach for beginning and intermediate surfers that’s also off the beaten path, he said, but it’s unguarded.

The waves break outside and travel along a sandbar, making for a long ride, he said. It’s a good place for longboard and fun-shape boards.

“The majority of the waves are pretty small and pretty gutless,” Strunk said.

With a long stretch of beach available, surfers can spread out and find waves easily.

“It’s typically very uncrowded,” Strunk said. “It can take quite a few surfers, although you don’t tend to see that many out there, even when it is good.”

Cruz Townsend, of Port St. Lucie, carries his surfboard to the water’s edge as he heads into the water at Bathtub Beach on Friday, Nov. 15, 2019, in Stuart. “It’s definitely rougher than I expected,” said Townsend of the surf conditions. Heavy surf conditions and safety concerns required closure of Bathtub Beach.  (Photo: HOBIE HILER/SPECIAL TO TCPALM)

Dollman is good for beginners on small-wave days, Strunk said. It has small and big wave breaks that recently have been discovered by surfers from Fort Pierce, Jensen Beach and Stuart.

“During the dog days of summer, it’s a great place to go,” Strunk said.

Catching waves at mid-tide — about two hours after dead low tide or two hours before full high tide — works best for all the St. Lucie County spots, he said.

Tara Schwartz, who owns Ohana Surf Shop, uses Stuart for lessons and takes beginners to the south end near the dirt parking lot. It has a little break and isn’t too deep, she said. The beach has lifeguards.

“There always seems to be a little sandbar on the south end,” Schwartz said. “It’s sandy bottom. You don’t ever have to worry about hitting rocks.”

She suggested going just before or just after low tide — a two- to three-hour window. Otherwise, the water would be too deep for 1- to 2-foot waves to break over the sandbar.

“The smaller the wave, the better you want that sandbar to be,” Schwartz said. “It makes (the wave) pop up.”

Brett Jenkins, who co-owns Cowabunga Company with his parents, uses Jensen Beach for lessons. He used to teach at the north end because of a sandbar, but it has shifted. Now, he teaches at different parts of the beach, which has lifeguards.

“Even in the summer swells, where there’s no wave really any place else,” Jenkins said, “it still has enough force to get up and break because it’s so shallow.”

Near low tide, the sandbar is knee- to waist-deep, so it’s perfect for smaller waves.

“The better experience to have as a beginning surfer will probably be at a low-tide break with a little 1- to 2-foot wave that’s just kind of rolling through,” Jenkins said.

Laurie K. Blandford is TCPalm’s entertainment reporter and columnist dedicated to finding the best things to do on the Treasure Coast. Follow her on Twitter at @TCPalmLaurie or Facebook at faceboook.com/TCPalmLaurie.