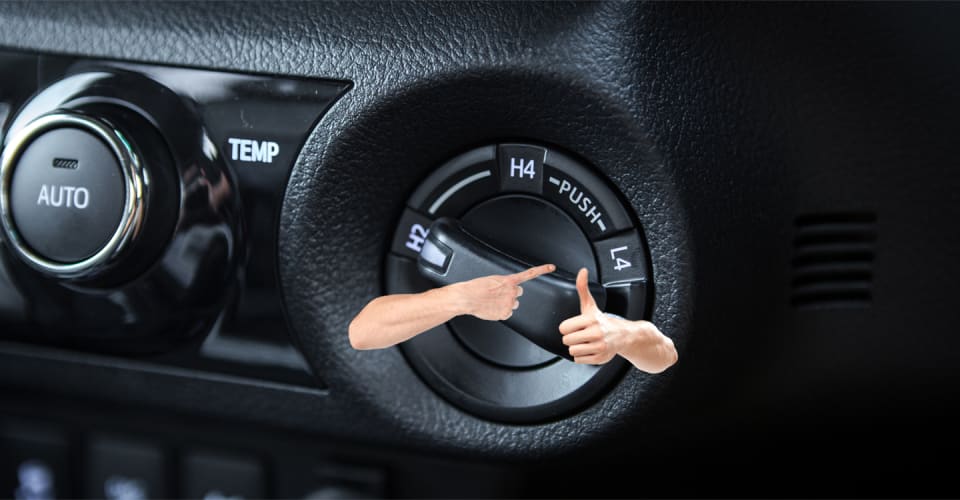 Trent, I won’t go all the way and call you an imbecile, which is probably a really bad idea seeing as you’re who I report to. I’m new, and that could end really badly for me. But, I have some points to make after reading your own opinion piece about low-range.

Low-range is already dead, if you want it to be; it’s called the soft-roader. There are plenty of vehicles out in the market that claim some form of off-road capability, but reach their peak beyond some sloppy dirt or wet grass. Aside from the rule-breaking Amarok automatic (which has its own shortcomings as a 4×4), low-range is still, and will remain for quite a long time, the best example of a true off-road vehicle.

What a low-range transfer case does is something that can be imitated by fancy electronics and torque converter tuning, but cannot be replaced. It’s kind of like bacon and facon (vegetarian bacon). Sure, it’s similar, and many love it. But it’s not the same. You’re never going to start making boeuf bourguignon by slowly frying off something soy-based, are you? And in that same vein, it’s very difficult to envisage something without low-range equalling something with it.

What manufacturers are doing to mimic low-range performance is via the torque converter and throttle position tuning. Torque is not multiplied through gearing; the engine and gearbox are left to work very hard, lugging in slow and demanding conditions, to keep a vehicle moving forward. Sure, there might be a bit of a granny gear in the 8/9/10-speed gearbox, but the overall reduction is nowhere near the same of true reduction gearing. True reduction gearing gives you effortless off-idle torque, without having to touch the accelerator.

The eight-speed Amarok has a 17.44:1 maximum crawl ratio that gets artificially improved through the off-road mode. Compare that to a Ranger, and you have 42.27:1. That means you’ve got better torque multiplication and low-speed control in low-range, and better compression braking on descents. Hill-descent control is great, but compression braking makes it even better. One reason why Jeep’s Wrangler Rubicon is so capable off-road is its gearing: it has a massive 73.1:1 reduction, because of a 4:1 reduction in low-range and 4.1:1 diff ratio.

Not having low-range in a 4×4 has a direct and detrimental effect on the performance and longevity of the vehicle. Heat is the number-one enemy of an automatic gearbox. Add too much heat, and the life of your transmission fluid plummets. On a complex modern automatic gearbox, which is often ‘sealed for life’, this poses big problems.

Sure, if your idea of 4WDing is simply doodling around the riverside, dropping a tinny in at the local slipway and heading onto some manicured grass for a picnic (don’t forget the bacon), then something without a low-range transfer case might cut the mustard for you. In other words, buy a soft-roader.

What a four-wheel-drive vehicle is built for is so much more than that. And there isn’t a country on the planet where it’s more important than here. A 4×4 is your ability to climb a steep, rutted mountain for hours. It’s your ship across a vast, deserted wilderness of Australia’s interior, and your ticket to powering through kilometres of soft, powdery sand against a rising tide. It needs to be inherently capable off-road, and able to deal with long stretches of stressful low-speed work against any weather conditions mother nature decides to throw at you, while loaded up and towing.

This is the kind of 4WDing that tens of thousands of Australians are doing in their hard-earned spare time, in between the family duties of drop-offs and commuting during the week. In terms of needing to be adept at a wide range of applications, the modern 4WD has a tough gig. Line up for a beer at the Birdsville Hotel in the winter months, and try finding a quiet campsite on Fraser when the weather is good; you’ll soon see how popular serious recreational 4WDing is in Australia.

Imagine this scenario: you’re in the Victorian High Country, atop Mount Buller. In typical style, there’s a big storm rolling in, and it’s moving fast. Time to pack up camp and head down the mountain. Loaded to the hilt with travellers and camping gear, you start your descent down the slippery and rutted switchbacks of King Billy and Zeka Spur tracks. Wheels lift off the ground as articulation maxxes out, and your rig groans against the interminable force of gravity. Traction is your number-one priority here: a slow, controlled descent will give you the best chance of getting to the bottom safely and away from the impending storm.

What would you prefer to be slowing the progress of your three tonnes down a mountainside? Only a computer-controlled ABS system that uses the brakes to slow the car down, or also having a low-range transfer case that harnesses the engine’s combustion cycles? Brakes can overheat and wear out, and the whole system is dependent on an ABS sensor or wire not being damaged. It’s not a common occurrence. But it’s not entirely uncommon, either.

Steep descents often end in some kind of water crossing in the bottom of a valley. The last thing you want to do is dunk hot brakes into cold water; there have been plenty of stories of trips cut short and braking systems ruined because of warped discs.

Both systems will work separately, but having both working in unison is significantly greater.

Likewise, let’s think about soft, sandy beaches. Australia is home to thousands of them, and many are 4WD-accessible. When you’re close to getting bogged, churning through sand in a desperate attempt to hold onto momentum, there are barely any other conditions on the planet that won’t generate more heat and stress on a vehicle’s driveline. Rather than simply burying the throttle deeper and making the engine and gearbox lug harder in a high gear ratio, a much better solution is selecting low-range, and using that multiplication of torque and reduction in gearing to run higher revs and less overall stress.

Sure, an automatic Amarok (for example) will handle this more often than not. But when working hard for long periods of time in arduous conditions, the gearbox will get hot faster and trip the ECU into cutting power. I don’t like to think about the longevity or replacement cost of a ZF eight-speed gearbox that’s been running hot, to be honest.

The Amarok is also tuned to limit torque massively in reverse, and doesn’t like off-road mode while towing. For my money, I’d take something with a proper low-range transfer case any day of the week. I also find something with low-range much more enjoyable and engaging to drive off-road – kind of like a preference for a manual-shifting sports car.

A low-range transfer case makes a 4WD better at its most important job: off-roading. Australia is home to the most passionate and discerning 4WDers on the planet. We’re buying more 4WDs than ever before, and accessorising them to suit our off-road plans. And it’s for a damn good reason. Give me a 4WD with a short lever (or dial) any day.

Is low-range dead? No. It’s not. And it’s not going anywhere.

The best beaches that Australia’s Northern Territory has to offer

Top Ways to Easily Practice the Game of Golf – SWAAY