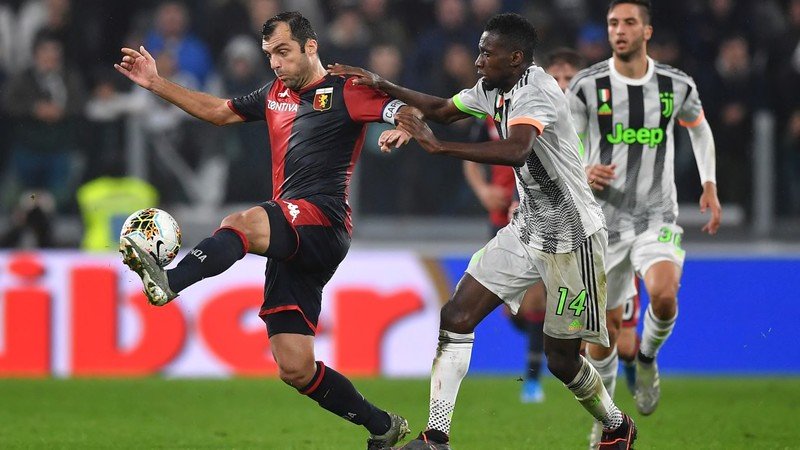 Top-flight Italian football continues tonight as league leaders Juventus head to Serie A strugglers Genoa. Don’t miss a kick of the action by following our live stream guide below.

Juventus have bounced back from their Coppa Italia disappointment at the hands of Napoli. The Bianconeri have won both Serie A games since the defeat in the cup final, scoring six goals in the process. Genoa, on the other hand, have taken only one point from the available six in their two games back after the unscheduled season break.

Juve were also in great form before the lockdown having only been defeated three times in 2020. They also beat Derby d’Italia rivals Inter 2-0 in their last game before the season was put on hold due to the pandemic. They currently sit at the top of the Serie A table, though Lazio are hot on their tails.

In contrast, Genoa are in the lower echelons of Serie, currently sitting in 16th place with just 26 points. The Grifone have won just three league games in 2020 and are not out of the relegation risk zone. A draw in their last game against fellow strugglers Brescia has not helped their situation, either, so Davide Nicola’s men will be hoping to turn their fortunes around tonight.

Read on for full details on how to get a live stream of Genoa vs Juventus no matter where you are in the world with our guide below.

Genoa vs Juventus: Where and when?

All eyes will be on Genoa’s Stadio Luigi Ferraris on Tuesday for this match which is set to take place behind closed doors. Kick-off is at 9:45pm CEST local time.

Watch Genoa vs Juventus online from outside your country

We have details of all the US, UK, Australian, and Canadian broadcasters of the Serie A further down in this guide. If you’re intent on watching Genoa vs Juventus but find yourself away from home then you’ll run into problems when trying to stream your domestic coverage online from abroad as it’s likely to be geo-blocked.

That’s where a VPN (Virtual Private Network) can be a lifesaver. They allow you to virtually change the ISP of your laptop, tablet, or mobile to one that’s back in your home country, letting you watch as if you were back there.

VPNs are incredibly easy to use and have the added benefit of giving you a further layer of security when surfing the web. There are lots of options, and we recommend Private Internet Access as one of our top picks due to its speed, security, and ease of use. It can be used on a vast array of operating systems and devices (e.g. Windows, Mac, iOS, Android, and more). Sign up for PIA
now now and enjoy a 77% discount and 2 months FREE with its 2-year subscription. Or give it a try with its 30-day money-back guarantee. Looking for other options? Here are some alternatives that are on sale right now.

How to watch Genoa vs Juventus online in the U.S. exclusively on ESPN+

For U.S. viewers, ESPN+ is the best way to watch this Serie A game. It has exclusive coverage of the Italian league so it should be your go-to place for Italian soccer streaming.

The game is also being broadcast in Italian language on the Rai Italia Nord America channel that can be accessed via fuboTV.

How to stream Genoa vs Juventus live in the UK

Premier Sports has exclusive rights to Italian football coverage in the UK and will be streaming tonight’s games and the remaining Serie A fixtures via its Premier Player app.

The game kicks off at 8:45pm local time in the UK.

If you’re planning on watching Serie A games Down Under, then you’ll need to tune in to BeIN Sports. You can subscribe to BeIN Sports Connect for AU$19.99 per month or AU$179.99 per year to access all of the games. Either way, you’ll get two weeks free to try it out.

Alternatively, subscribing to Kayo Sports gets you access to Serie A football among 50 other sports from AU$25 per month.

You’ll need to be ready to tune in at 5:45am AEST on Tuesday morning to watch the action from Genoa.

Sports streaming service DAZN has the rights for live Serie A matches in Canada. The network is set to show all of the remaining fixtures of the season, including Genoa vs Juventus, live.

It is offering a one-month free trial, followed by a rolling $20-a-month or annual subscription of $150. The dedicated DAZN app is available for iOS and Android phones and tablets, as well as Amazon Fire TV, Android TV, Chromecast, Apple TV plus most modern Smart TVs. Of course, if you are outside Canada, you can follow the VPN route above and tune in with a DAZN log-in all the same.

Family getaways in Victoria for all ages and interests – finder.com.au