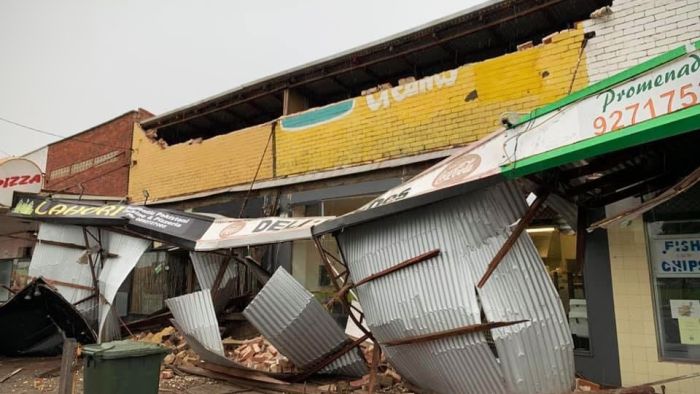 More than 50,000 homes and businesses are without power across Western Australia as a severe storm tracks down the coast, bringing wind gusts of more than 100 kilometres per hour.

In the Perth metropolitan area, electricity supply to about 37,000 homes and businesses has been impacted by the storm.

13,000 of the affected properties are in WA’s Mid West region, including the port city of Geraldton.

The worst-affected suburbs include Beckenham, East Cannington, Kenwick, Bayswater, Bassendean, Mirrabooka, Dianella, and Malaga, along with the hills suburbs of Sawyers Valley and Mount Helena.

Western Power said some households should expect to remain without electricity overnight, particularly in places where it was not safe for crews to repair the network.

Almost 200 storm-related calls for assistance have been made to emergency services across the state.

Bureau of Meteorology (BOM) WA manager James Ashley said the weather formation was “dynamic and complex”, as a system from ex-Tropical Cyclone Mangga interacted with a cold front.

A deep low pressure system is forecast to form off the south-west corner of the state.

The worst of the weather is due to hit Perth this evening and tomorrow morning, and not ease until Monday afternoon.

“In a broad area, the south-west of the state will be hit really severely overnight, tonight and into tomorrow,” the bureau’s James Ashley said.

“Really quite severe conditions will still be experienced in Perth tomorrow morning.

“But in small pockets up in the north of the state they are still likely to experience those 130 kilometre per hour [winds], those really severe conditions.

“But I should emphasise it’s pretty much the whole western half of the state that’s getting strong northerly winds at the moment.

There were reports of damage to buildings, homes, fences, electricity infrastructure and trees across Perth as the storm front moved south.

Geraldton couple Bronson Cox and Sharree Williams were left shaken after large tree branches fell on their moving car while they were in it.

“Suddenly the glass was all broken and there was a branch near my face, so a bit of a fright,” Ms Williams said.

There are reports of roofs being ripped off buildings in Geraldton and Kalbarri.

Emergency services, which are expecting hundreds of calls for assistance during the night, are telling everyone to stay inside wherever possible during the storm.

The storm is expected to push up tides by half a metre more than normal. When that combines with the high tide, the bureau says, it could cause localised flooding.

Waves are forecast to peak at more than 8 metres on Monday, and surfers, kite boarders and other ocean users are being told to stay out of the water.

“They should not be there, it’s dangerous coastal conditions,” Department of Fire and Emergency Services’ (DFES) Danny Mosconi said, adding going into the water would put their lives and the lives of marine rescue teams at risk.

“There could be 8 metre waves, strong winds, so definitely no-one should be in the water at the moment.”

People who had gone away for the weekend were urged to come home early to avoid being caught in the storm.

But traffic on the Albany, South West and Forrest highways were still heavy, with debris starting to appear on the roads.

“Our advice to the travellers, that if you’re in the South West still, stay there,” Mr Sewell said.

“Don’t travel home this afternoon. As we’ve heard, the weather is going to be fairly catastrophic, so the last thing emergency services want to do is attend traffic accidents on the freeway network.”

The DFES was also advising people not to go on roofs to clear gutters or perform other work, saying they should instead wait inside for conditions to improve.

Dust from the storm has blanketed parts of WA’s Mid West coast, including Geraldton, with strong winds bringing power lines down.

Port Denison, Dongara, Cape Burney and Greenough, along with Kalbarri, are among the worst-affected areas.

The strongest gust of wind recorded today was in Gooseberry Hill in Perth’s hills just after 3:30pm.

“All this wind is picking up the dust through parts of the Gascoyne and the Central West, but the rain should increase in the coming hours so hopefully that will dampen that down,” BOM forecaster Jessica Lingard said.

“We are expecting conditions to worsen down the west coast as we move into this afternoon,” she said.

A total fire ban remains in place for the entire state south of Carnarvon.

In the past 24 hours, five ‘watch and act’ alerts have been issued for fires, including in the Mid West and greater Perth area.

‘This is my deep breath’: New Jersey pro surfer returns to the water in Ventnor for the first time since coronavirus closed the beach | Local & Pro