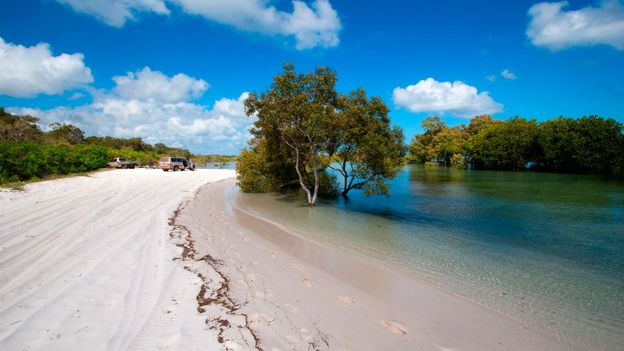 The Fraser Island
Great Walk, which undulates
through the island’s interior for 90km, is an excellent way to see many of the
island’s best features. The inland vegetation varies from wild heath to
wetlands to dense tropical rainforest (it is the only island in the world where
rainforest grows on sand); giant sandblows (dunes more than 200m high) form
sandy scars that can be seen for kilometres; and at night the Milky Way blazes across
the surface of crystalline creeks and freshwater lakes.

Perched lakes
Over hundreds of years, sand drifting off the east coast of mainland
Australia formed Fraser Island, a 120km-long largely uninhabited sandbar that
is barely 20km at its widest point. The Great Walk starts from Dilli Village in
the island’s southeast and passes through open forests and scribbly gum woodlands,
full of eucalyptus trees covered in iconic scribbles drawn by burrowing moth
larvae. After 2km, take a detour off the track to scramble up the Wongi
sandblow for spectacular coastal views.

The trail continues for another 4.2 km to Lake Boomanjin, the world’s largest
perched lake (lakes that sit above the level of groundwater and are mostly fed
by rainwater), where tannins from the bark of lakeside eucalyptus trees stain the
waters reddish-brown. The vegetation changes soon after leaving Boomanjin, with
kauri pines, vines and staghorns forming a primeval world after the open
woodlands.

Of Fraser Island’s 40 perched lakes, six lie on or close to the Great
Walk. The next one you reach, Lake Benaroon, 3.5km from Lake Boomanjin, has
delicately-coloured tea-stained water. From here, the next 7.5km begins with a
scenic walk along the shore and through low scrub to the soft white sands and
blue waters of Lake Birrabeen. Leaving the lake, the trail follows an old
logging road through satinay forests (Fraser Island turpentines) and brush box
to Central
Station, a former forestry camp and now Fraser’s main campground.

Fraser Island’s natural beauty has not always been valued, and a
historical cottage near Central Station details the island’s chequered history.
A thriving logging industry began in the late 1800s, felling tall kauri pines
and satinay trees. The hardwood timber of the satinays was prized by
shipbuilders as it is resistant to shipworm, and axe scars are still evident on
many of the tall forest trees. Exploitation of the island’s natural resources
continued when sand mining began in 1950 to source the island’s rich deposit of
minerals such as zircon and monazite. But environmental lobbies brought both
industries to an end – sand mining in 1977 and logging in 1991.

A boardwalk along nearby Wanggoolba Creek dives into dense rainforest. The
crystalline waters are so clear the sandy creek floor is a pale ribbon, winding
around moss-covered rocks, king ferns and piccabeen palms. With a green canopy
overhead, hanging vines, tropical foliage and the calls and whistles of unseen
forest creatures, it is a world echoing a prehistoric time.

From Central Station there are two ways to reach Lake McKenzie, one of
Fraser’s prime sights. Either turn west for a 6.6km hike via Basin Lake, a
popular turtle haunt, or turn east for an 11.3km walk to Pile Valley and its
impressive stand of satinay trees. Both trails eventually reach Lake McKenzie’s
sugar-white sands. The water is a stunning vivid blue, and the pure-silica sand
is soft underfoot. The sand is so fine it is ideal for skin
exfoliation. The slightly acid water, from decaying plants, limits
the viability of aquatic life but in no way affects the pleasure of a
well-earned swim.

Valley of the Giants
After leaving Lake McKenzie, the trail heads east for 11.9km, passing
through some of the island’s most spectacular open forests and rainforests to
Lake Wabby, the deepest lake on Fraser Island at 12m. But a massive sandblow
rising from its eastern shore is slowly encroaching on the lake, and within a
hundred years will have swallowed it completely. Scrambling up the steep dune
is hard work, but the views over the lake and the island are worth the climb.

The longest section of the trail — 16.2km — enters the cool, shady
forests of the central high dunes. The track follows a blackbutt-forested ridge
before descending into a series of corridors between the dunes, where dappled
light filters through towering stands of brush box and satinays. Poetically
named the Valley of the Giants, this area contains some of the largest trees on
Fraser Island. Some are more than 1,200 years old, with trunks more than 4m across. Dwarfed
by these giants it is easy to understand Fraser’s appeal to the early logging
industry.

Leaving the domain of the forest giants, follow an old tramline for 13.1km
to another perched lake, Lake Garawongera. The walk, which passes by the
remains of early logging camps, becomes increasingly easier as you follow old
forestry trails through open forest and heath land.

The final leg to the eastern
beachside village of Happy Valley is a 6.6km (mostly downhill) stroll through
open forest and sand dunes. If your sleeping bag has lost its appeal, various
accommodation choices from holiday homes to hostel dorms can provide a bed. Sailfish on Fraser
has large and comfortable self-contained two-bedroom apartments while Fraser Island Retreat
has basic beds and amenities in simple timber cabins.

Practicalities
The Great Walk is best experienced during the drier months from June to
September. This is also a prime time to spot migrating humpback whales breaching
the waters off the east coast beaches.

The trail has a number of campsites, but camping permits need to be booked in advance. Dingo prints are often
found around tents, and bolder animals can be seen on the beach. These feral
dogs — descendents from the Southeast Asian wolf — climb trees and
communicate with wolflike howls. Due to the island’s isolation, Fraser’s
dingoes are the most genetically pure strain in Australia, and although small
and scrawny, the animals (especially in packs) have been known to attack
children and adults. Some campsites are protected with dingo-proof fences, but
hikers should be careful. It is illegal to feed the dingoes, or any wildlife,
on Fraser Island.