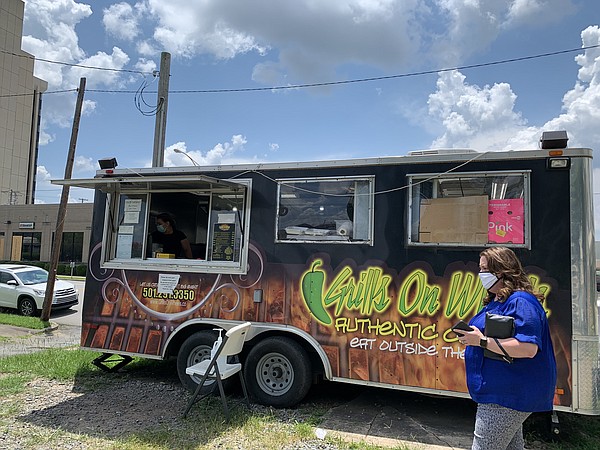 Citing the continuing state of the coronavirus pandemic, the Downtown Little Rock Partnership has called off the 10th annual Main Street Food Truck Festival, scheduled for Sept. 20 in downtown Little Rock. “We were proud to celebrate a decade of this downtown tradition that has become so much more than just a food festival,” the organization said in a Monday Facebook post announcing the cancellation. “Unfortunately, the universe had other plans.

“Our planning committee came to the conclusion that the pandemic was not slowing down, and we just didn’t want to contribute to the spread,” said Director of Communications Ellen Lampe. “We tried to map out a safe distance between trucks, but it would have been very hard to make people social-distance, and they wouldn’t be able to eat or drink while wearing masks — and eating and drinking is what this festival is all about.” Lampe said the Downtown Partnership will still label the 2021 festival as the “10th annual” despite the break in direct sequence.

The festival involved closing off Main Street between Third and Ninth streets and Capitol Avenue between Main and Spring streets. The 2019 festival featured more than 80 food trucks from across the South, with vendors, beer gardens and musical entertainment, and tens of thousands of visitors.

In case you missed this earlier in the week, the state Health Department shut down Brewski’s Pub & Grub, 315 Main St., Little Rock, last weekend after three employees tested positive for covid-19 and after Alcoholic Beverage Control officers found the pub “in violation of the Directive on Resuming Bar or Club Operations” and was “an imminent health risk for the business to continue operating.” Specifically, the Health Department order said Brewski’s was out of compliance with guidelines by operating at more than 66% capacity, not ensuring proper social distancing with seating and not ensuring that patrons wear face coverings. The pub will remain closed pending an appearance by owner Brad McCray at a hearing before the Board of Health. McCray confirmed that three employees had tested positive for the coronavirus, the first as early as June 27, and had been quarantined and were not working in the establishment; a Sunday post on the restaurant’s Facebook page said that “we have and continue to follow CDC [Centers for Disease Control] and ADH guidelines.”

However, state Health Secretary Nate Smith said Monday that the Health Department had gotten a tip with complaints of the bar being packed with people not wearing face masks and determined that three people who tested positive for the virus had been to the bar. He said Alcoholic Beverage Control agents visited the bar Friday night and took photographs supporting some of the complaints, and that the management appeared cavalier about the allegations, telling officials “there’s nothing we can do about this,” which he said prompted the Health Department to take action.

“They had advertised for a karaoke night, which seemed a particularly bad idea in a packed venue when there’s already potential cases connected to that,” Smith said. A Health Department spokeswoman confirmed Monday that the department is aware of at least seven people who tested positive in the two weeks after visiting the bar, though there is no evidence that they contracted the virus there.

It is the first action of this kind that the Health Department has taken against a restaurant/bar; the Alcoholic Beverage Control Division yanked a Fort Smith concert venue’s alcohol permit May 14 after the state issued a cease-and-desist order regarding the venue’s plans to hold a concert three days before the state officially reopened large indoor venues. The alcohol permit was returned May 15 after the venue applied to move the show to May 18.

McCray did not close his pub after learning that his employees tested positive. Several other area restaurants, including Trio’s, The Pantry and Petit & Keet in Little Rock and Mike’s Place in Conway, voluntarily closed temporarily over the past couple of weeks after employees tested positive or were exposed to people who had tested positive for the virus. Trio’s has remained closed awaiting the results of tests of all its employees; Petit & Keet is set to reopen today. The Flying Saucer, 323 President Clinton Ave., in Little Rock River Market, has also closed, though without confirming the closure is connected to any specific covid-19-related incident or situation, posting on its Facebook page (facebook.com/FlyingSaucerLittleRock), “So sorry. Little Rock Saucer is closed. See you soon.” A voicemail message we got by calling (501) 372-8032 explains only that “due to recent events, we have decided to close temporarily.”

And Pizza D’ Action, 2919 W. Markham St., Little Rock, has also closed temporarily, for a combination of renovations and to help keep the community safe, according to a recent post on the Facebook page (facebook.com/pizzadactionlr): “[W]hile also standing true to our commitment of not reopening regardless of what local government will allow … We are shutting down for at least the next 7 days! We have been in the process of installing a new floor … and we’re about to purchase a new oven, and several other upgrades as well.” While maintaining a “commitment to keeping our community safe,” the post says, “it does allow a great opportunity for the upgrades which were previously in the works.” The phone number there is (501) 666-5403.

Paper covers the windows behind the name — Wicked Taco Factory — painted prominently on the space in the Pyramid Building, 221 W. Second St., Little Rock, that was once a Subway outlet. We reported some months ago that it’s to be the storefront incarnation of the Grills on Wheels Mexican food truck. That truck isn’t open every day, but when it is, it’s usually parked on a vacant lot next to Frances Flower Shop, 1222 W. Capitol Ave., Little Rock. We were unable to get through at the food truck’s listed phone number, (501) 291-3350, for a timeline, but a young woman vending tacos from the truck on Tuesday said it’ll open soon.

Eagle-eyed readers report that the Starbucks at 10721 Kanis Road at Shackleford Road, Little Rock, has reopened, with a “large banner out front, cars in the lot and [in] the drive-thru.” The Facebook page (facebook.com/Starbucks-141068822595137), which a couple of weeks ago listed it as “temporarily closed,” is now active and lists the hours of operation as 5 a.m.-10 p.m. daily. However, the listed website for that outlet, starbucks.com/store/12878, still returns a message from the chain’s store locator: “Whoops! We couldn’t find that store. Please search again.” We were unable to get through to the listed phone number, (501) 227-0770, during business hours. 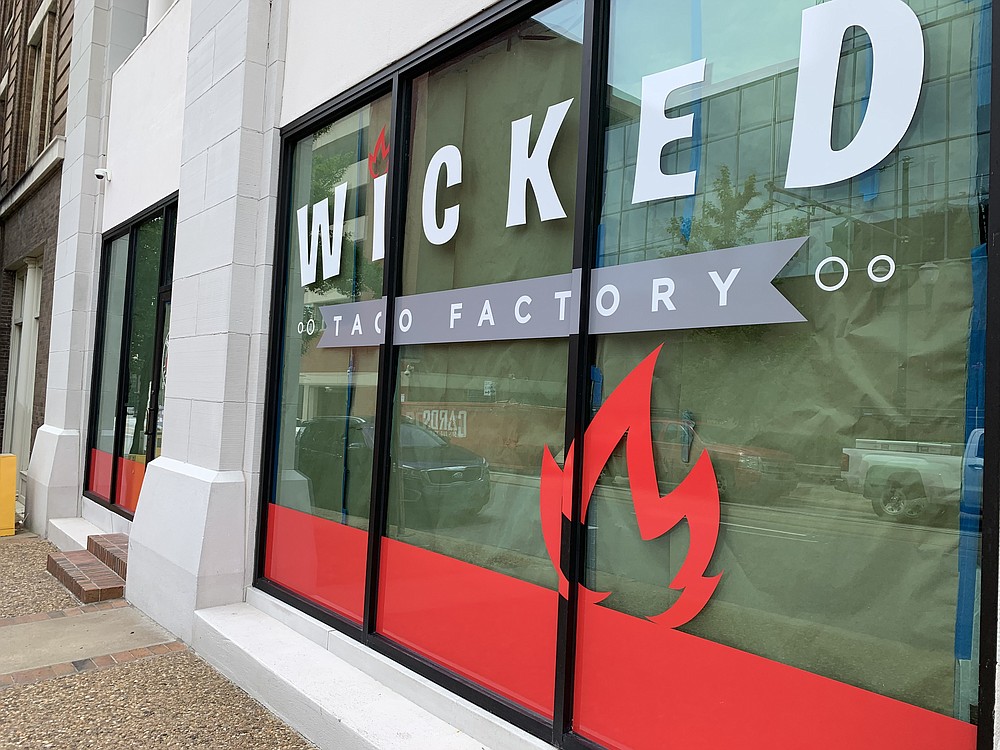 Wicked Taco Factory, the brick-and-mortar incarnation of the Grills on Wheels food truck, is pending at 221 W. Second St. in Little Rock.
(Special to the Democrat-Gazette/Reed Martin)

A late-June building permit application filed with the Little Rock Department of Planning & Development shows plans to spend $500,000 to “finish out of a Tacos 4 Life, [mechanical, electrical, plumbing] with open walls,” at the former Mexico Chiquito at 13924 Cantrell Road, Little Rock. We’ve previously reported that it’ll be part of a new strip center currently under construction.

Citing uncertainty about the covid-19 pandemic, the University of Arkansas Pulaski Technical College Foundation and the UA-PTC Culinary Arts and Hospitality Management Institute have rescheduled the 13th annual Diamond Chef Arkansas competition, originally set for April 23 and postponed until Oct. 15, for April 22, 2021. Keep up with any updates at UAPTC.edu/diamondchef.

And the owners of Bella Italia N Argentina, 2755 Dave Ward Drive, Conway, have decided to stay closed “until some point next year.” A post on their Facebook page (facebook.com/BellaItaliaAndArgentinaRestaurant) addressed “to our Dear Valued Customers” explains that “We were not planned to close so long but after many factors happening to us, we decided that this is the best option for us. We will try to re open Bella’s again on a better moment.”

Has a restaurant opened — or closed — near you in the last week or so? Does your favorite eatery have a new menu? Is there a new chef in charge? Drop us a line. Send email to:

The Big Screen Is Back! Italian Film Festival To Show In Cinemas Nationwide.