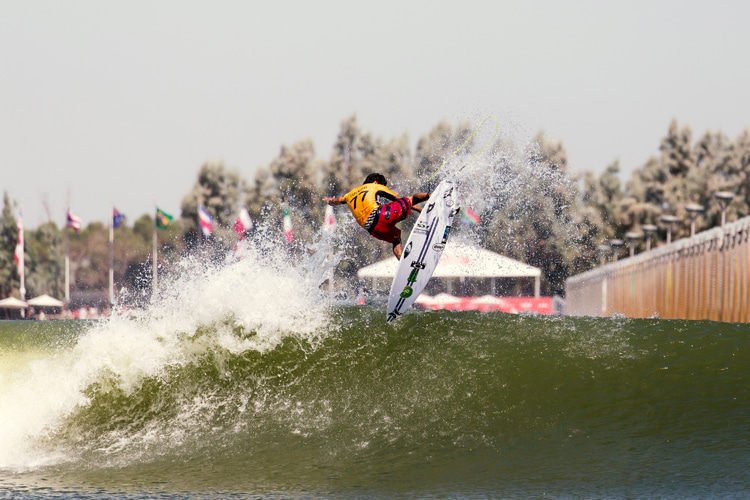 Filipe Toledo and Coco Ho have taken out the Rumble At The Ranch, at the Surf Ranch, in Lemoore, California.

“Everyone was super fired up to put the jersey back on. I knew there would be fireworks in the entire event, and it was. We had huge scores, amazing rides, and we won!” said Filipe Toledo.

The Brazilian surfer rode the highest scoring wave of the competition – a 9.67 – and together with the Hawaiian teammate beat Kanoa Igarashi and Tatiana Weston-Webb.

The Olympic duo was not able to lock in the scores required to take home the trophy.

The host – Kelly Slater – was happy to get back to competition mode.

“I haven’t surfed a contest in eight months, so it’s fun to get rolling. We’ve all been tested, so we’re all Covid-free,” underlined Slater.

“I was in Australia, and rugby started back up. But no crowds. Basketball is trying to get there with no crowds in their bubble.

“But it’s hard on team players – they have families, wives, and kids. For us, we’re pretty much socially distant.”

“I was in Australia for three months, and we were able to surf the whole time, and Covid was super under control, so I don’t think surfing is the problem, and it makes sense we get back out there.

“The issue for us on tour is that we can’t travel. We can’t get people in, you’ve got a quarantine if you’re even allowed in the country. Basically, Americans aren’t allowed anywhere in the world right now, so we screwed that up,” concluded the 11-time world champion.

Toledo and Ho donated the $10,000 prize-money to the Surfrider Foundation’s LA Chapter.

Rumble At The Ranch | Final