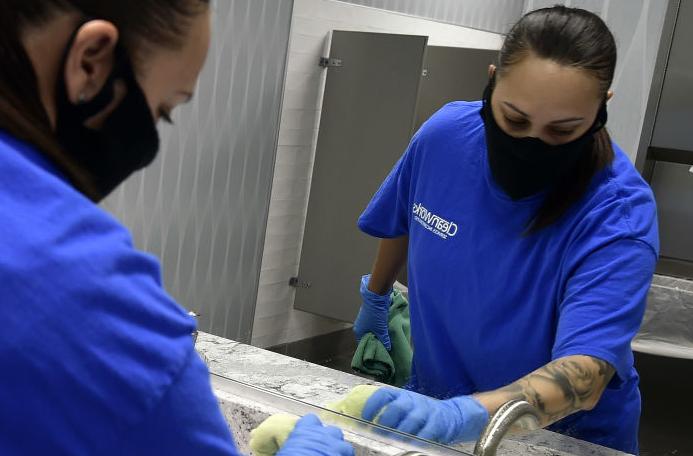 Ted Gallagher is trying his best to manage two conflicting forces — a surplus of work and a shortage of workers.

Gallagher is vice president and partner at Environmental Hazards Control, a Lancaster-based company that disinfects business facilities to prevent the spread of the novel coronavirus that causes COVID-19.

Like other firms that provide the service, here and nationwide, he’s been swamped since the pandemic arrived here in mid-March.

“Right now we’re probably at about 120% at capacity,” with many employees working overtime, Gallagher said. “We’re slammed. We’ve been getting calls probably hourly for some type of cleaning. We’ve been cleaning everything from cars to prisons to everything in between….

“So far, we’ve been able to accommodate all of our requests, one way or another, even if it requires working 24 hours a day,” he added.

Hersheypark announced this morning that the park would reopen to the public in July, with th…

Jeff Burns, vice president of operations at Clean Works, another Lancaster-based firm that offers disinfecting services, is experiencing the same trend. He too has his employees working overtime – with workweeks as long as 70 hours — to meet demand from existing clients.

In fact, existing clients want so much extra service – some jumping from one or two cleanings a week to five or seven — that Clean Works temporarily has stopped serving residential clients and put a pause on adding new industrial/commercial clients.

“People are being woken up to the fact that cleaning isn’t as easy as they think it is…,” said Burns. “They’re going to have to realize that cleaning is an important part of every business.”

Kelsi Martin, owner of Ephrata-based Klean by Kelsi, echoed the view of Burns – in the minds of business owners, the coronavirus has underscored the importance of disinfecting workplaces.

She expects to add a couple more workers to her eight-employee payroll because of a surge in demand for cleaning services when more offices, stores and restaurants reopen.

“I think the level of cleanliness for business owners is going to be a lot higher,” she said. ”They’re going to want either more frequent cleanings or more intense (Centers for Disease Control)-compliant cleanings for a long time.”

Ephrata-based Compleat Restorations has been hired to do deep cleanups at nursing homes where people have gotten sick or died from COVID-19 as well as at banks or supermarkets that have had confirmed cases, said safety officer Rob Benson. (Employees wear protective suits and masks for these jobs.)

It’s also fielding inquiries from retailers that are thinking about their cleaning needs prior to reopening at some future date, when Gov. Tom Wolf allows, said Benson.

Those kinds of calls are being fielded by the Lancaster office of Paul Davis Restoration too, said Michael Oster, director of client services.

“As we get closer to opening back up, we’re getting calls for coming in and doing a pre-disinfecting prior to companies calling people back to work,” he said.

The strain on the cleaning operations would be lessened if additional, experienced and available employees could be found but, as Gallagher put it, “they don’t exist.”

“I have had ads up for months and have not had any interest. … I just can’t find people that want to work,” he said.

And if they did, a second hurdle has surfaced.

Gallagher follows a federal requirement that new hires pass a pulmonary function test, so they can safely wear respirators. But local health care providers such as WorkNet Occupational Medicine and LG Health Physicians Occupational Medicine have temporarily stopped offering the test for employment purposes, due to COVID-19.

Gallagher said he’d like to add 10 employees to his 50-employee company, which also provides other services including asbestos and lead paint abatement, demolition and duct cleaning. Starting pay is $16 an hour.

“It’s been stressful. We’re hoping to see an end of this before September,” he said.

Burns shared a similar view. He’d add five to 10 employees to Clean Works’ 65-employee workforce if he could find qualified candidates, he said. But drug tests and criminal background checks eliminate many candidates; others choose to collect enhanced unemployment benefits rather than work, said Burns, who offers a minimum starting wage of $11 per hour (with no experience).

In the “new normal” world that’s resulted from the pandemic, cleaning practices that might have been considered over the top in the past have become commonplace.

“There’s times when they want their facility cleaned 24 hours a day, seven days a week, with the touchpoints they know their employees will have their hands on throughout the day —  machinery controls, door knobs, door handles, lunch tables, faucets, levers, anything you may come in contact with your hand,” said Gallagher.

Burns brings a similar approach, citing a local industrial site for example: “We do a local plant. Every Saturday, we disinfect all the equipment. We hit everything. We kill everything. Tow motors. Pallet jacks. You name it. You touch it, we do it.”

Still, professional disinfecting is a temporary solution, not permanent.

Oster says Paul Davis caution clients about the limits of anything they can do.

“We can come in and disinfect and we can clean, but a day later if somebody comes in and there is a case — that kind of all goes out the window,” he said.

Instead, Oster says they work with companies to create their own cleaning systems, whether it’s to have certain employees designated to clean or dividing the responsibilities among staff.

“One of the best ways is to put a protocol in place internally and that’s a good way to actually keep things disinfected on a regular basis and you’re not spending a ton of money to call a company in and do that,” he said.

Gallagher tries a similar tactic, but he’s discovered that sometimes the strategy only goes so far.

“We can teach people how to do this themselves,” he said. “But what we’re finding is, a lot of these companies just don’t have the labor force to take on this new cleaning and disinfection that the CDC recommends. It’s really an impact to them. They’re trying to comply to keep their facilities open but they can’t do it,” he said.

Having trained personnel come into the workplace to do disinfecting does more than protect just the employees’ physical health. It’s good for their mental health too, noted Oster.

“It’s a peace of mind thing to let their employees know they had a company come in and do a disinfecting prior to them coming back to work,” he said.