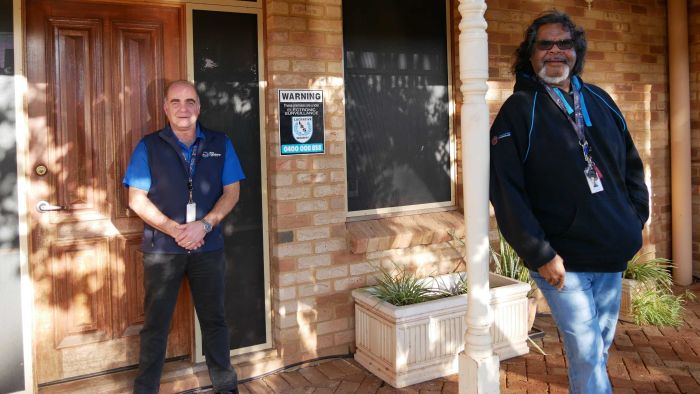 Through the COVID-19 pandemic, as support services in Western Australia’s Goldfields scrambled to find ways to keep the most vulnerable safe, homelessness has taken centre stage for the organisations.

Indigenous health service Bega Garnbirringu offers targeted clinical services and social support for some of the region’s most vulnerable people.

After a homeless couple from Kalgoorlie-Boulder presented to staff with COVID-19 symptoms, they were sent to get tested immediately.

But while awaiting their results, the couple needed a safe place to self-isolate and staff were at a loss for what to do.

They contacted the Department of Communities which authorised the couple to use the emergency accommodation set up as part of its pandemic response.

Bega Sobering Up Centre coordinator Dena Rundle said there were added social and cultural complexities for Indigenous homeless people who were not used to staying in hotels.

“Population health tried to ring them and they were too scared to answer the phone,” she said.

“They were even too scared to lay on the bed.”

Bega chief executive Clive Holt said the situation highlighted the need for a more coordinated response across agencies and organisations that worked to tackle homelessness.

Mr Holt said organisations had not been working together on the issue before COVID-19, but now a homelessness and rough sleeper taskforce had been established for the region.

“We are hopeful it’s a group that might grow into the future, because homelessness and rough sleepers is a problem that has always been there and will continue to be there post COVID-19.”

Different picture for the regions

But homelessness in a city like Kalgoorlie-Boulder, 595 kilometres north-east of Perth, can look different to what is seen in metropolitan areas around the country.

Mr Holt said location made the issue unique for Kalgoorlie-Boulder — it is surrounded by 19 remote communities, and being the largest centre in the Goldfields, people travel in for medical and cultural reasons.

People who are homeless in Kalgoorlie might have a home in their community, but issues around resources and poverty mean they get stranded and end up camping, couch-surfing or sleeping rough until they can find a way to return.

Things had changed since the pandemic began, Mr Holt said, but not necessarily for the better.

“People who were traditionally camping on the outskirts of town, sleeping rough, they have gone into housing with other people,” he said.

“That’s created another problem in its own right that you now have an issue of potential overcrowding.

“When you try to practice social distancing safely and good hygiene practices, if you’re in an overcrowded environment it makes it a lot more difficult, which in turn increases the potential risk and threat of spread.”

Bega social support unit manager Robert Shaw said his team had been conducting community scanning to identify who was at risk.

Through that process, more homeless people were found in Kalgoorlie-Boulder than was initially thought.

The Department of Communities saw the need to assist people to get home, and with the support of Bega, set up the Returning to Country program which helped 63 people stuck around the Goldfields to return to remote communities.

Most remote Indigenous communities are in the Ngaanyatjarra lands, which has been classified as a biosecurity area during the pandemic.

People are required to self-isolate for two weeks before re-entering, which has added another layer of complexity for those who do not know about restrictions or cannot afford to pay for accommodation in the meantime.

Local organisations in the lands are working to communicate messages about COVID-19 to local people, along with the Department of Communities which has issued messages in language.

Ms Rundle said she often hit the streets in Kalgoorlie-Boulder and had a good yarn to people to explain what COVID-19 was.

“We’re still educating about the distance, hygiene, everything at home.”

Bega’s only option for people who have nowhere to go is Boulder Short Stay, one of the only services the Australian Red Cross will continue to operate after the recent announcement it would withdraw services from Kalgoorlie-Boulder.

People have the option to stay at Boulder Camp on the outskirts of Kalgoorlie, but there are limited amenities and overcrowding remains a risk.

“If they’re congregating in the street, police might tell them to move on, but if they’re homeless, where do they move on to?” Ms Rundle said.

Mr Holt said he hoped to see the taskforce continue to work towards solutions to homelessness beyond the pandemic.

“We need to look at more permanent solutions and not just solutions in a time of crisis.”

What you need to know about coronavirus:

Swell of the Year Slams Australia