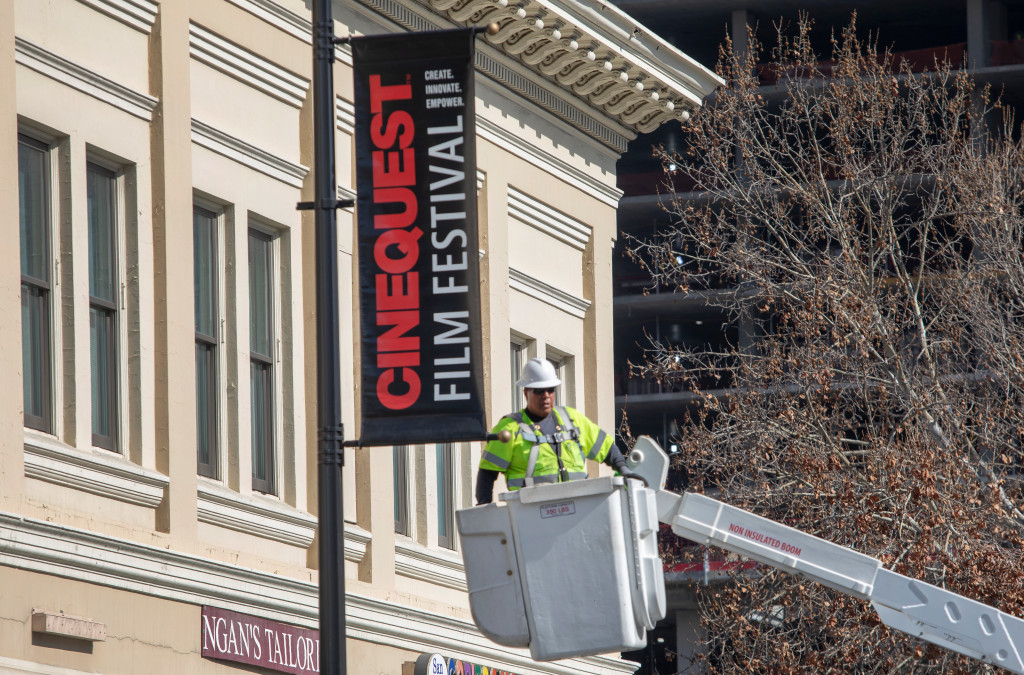 Coronavirus — or at least fear of its spread — hit Cinequest on Saturday morning, as the organizers announced that the film and creativity festival’s second week would be rescheduled until August in response to public health recommendations about large gatherings.

Festival Director and CEO Halfdan Hussey said that just as NBA and NHL games were continuing this weeked, Cinequest’s events and screenings scheduled for Saturday and Sunday would go on as planned. But the remainder of the festival, including screenings of scores of movies in both downtown San Jose and Redwood City and a closing night event featuring actor Jesse Eisenberg, won’t go on this week.

“It is very hard for us to do this, but we are fighters and rather than close down for a week, we are going to do more for the artists that we serve,” Hussey said. The “summer edition” of Cinequest will take place at the California Theatre and other downtown San Jose venues Aug. 16-30.

“We want to make clear that our very first concern is for the health and well-being of all our audience members, our artists and our own staff,” Hussey said.

Conversations among Hussey, festival co-founder Kathleen Powell and San Jose Mayor Sam Liccardo had been taking place regularly since the festival opened Tuesday night. There was a possibility of shutting down the festival as early as late Thursday afternoon, but the decision was made to continue on. That changed Friday when the number of cases in Santa Clara County climbed to 24 and continued guidance from Santa Clara County’s health department discouraged people from attending large gatherings.

Hussey said that attendance in the first week of the festival had taken and major hit, and that, combined with the expense of moving to August was going to have a serious financial impact on Cinequest.

“We’re going to take an economic hit in the neighborhood of $750,000 to $1 million, and for a nonprofit, that’s a big deal. So we’re going to rally with the city, and ask our friends and supporters, and maybe even the governor, to help out,” Hussey said.

However, he pointed out, no one had requested a refund during the first week, and only one scheduled guest had decided to pull out. Hussey said that actress Hong Chau, who was scheduled to receive the Maverick Spirit Award on Saturday night, felt uncomfortable about attending. Her film, “Driveways,” was still being screened and would include a tribute video for her career.

“We totally respect her decision, and we’ll present her award to her at a later time,” Hussey said.

While attendance at individual screenings appeared to be down, festivalgoers throughout the week said they were taking precautions like washing their hands or using hand sanitizer. Elbow bumps and toe-taps became the greeting du jour at VIP soirees and other gatherings, though most people chuckled over the new protocols to replace handshakes and hugs.

This was supposed to be a milestone, celebratory year for Cinequest, which was launched in downtown San Jose 30 years ago. Powell said earlier this week that sponsorships, donations and film submissions had all hit record levels this year, and the festival was showing about 300 feature and short films from 52 countries. The only question mark was if fear would keep moviegoers away.

“The theme for this year, our 30th year, is ‘Elation,’ and we want this to be a joyous celebration, and that’s what it will be in the summer,” Hussey said.

CHECK YOUR CALENDARS: March is normally the month when nonprofit fundraisers get into full swing, but the concerns over coronavirus and guidance from health officials has prompted several groups scrambling. Both the Willow Glen Education Foundation and the East Side Union High School District Education Foundation called off fundraisers planned for this weekend, the Cantor Arts Center at Stanford University closed to the public (though Stanford students with ID are still allowed in), and the San Jose Museum of Art and the San Jose Museum of Quilts and Textiles all called off planned art openings and events Friday night.

MACLA, another downtown gallery, is postponing its public programs, including next weekend’s presentation of Paul S. Flores’ “We Have Iré,” and is closing its afterschool program and its gallery through March 13. Executive Director Anjee Helstrup-Alvarez points out that because of MACLA’s policies, it will be paying its artists and technical staff next week, even though they’re not performing.

With just nine days to go, Bellarmine College Prep President Chris Meyercord announced that the prestigious Jesuit boys school in San Jose had canceled its Golden Bell fundraiser planned for March 14 — again because of an abundance of caution. “While we are not moving forward with the Golden Bell as planned, we want to assure you there has been no known exposure in our community to this virus,” Meyercord said in an email.

BUILD, a Bay Area nonprofit that works to create entrepreneurial opportunities for youth, also announced it was postponing its planned March 27 gala in San Francisco and was working with honoree Ayesha Curry to find a new date in the fall.

But other nonprofits also are trying to get the word out that they’re open for business — though monitoring the situation. The Bay Area Glass Institute at History Park in San Jose sent an email saying it remains open to visitors and currently has no plans to interrupt classes or events while also instituting additional cleaning processes and making wipes and hand sanitizer available for guests.

Amid coronavirus concerns, locals are torn over Coachella festival