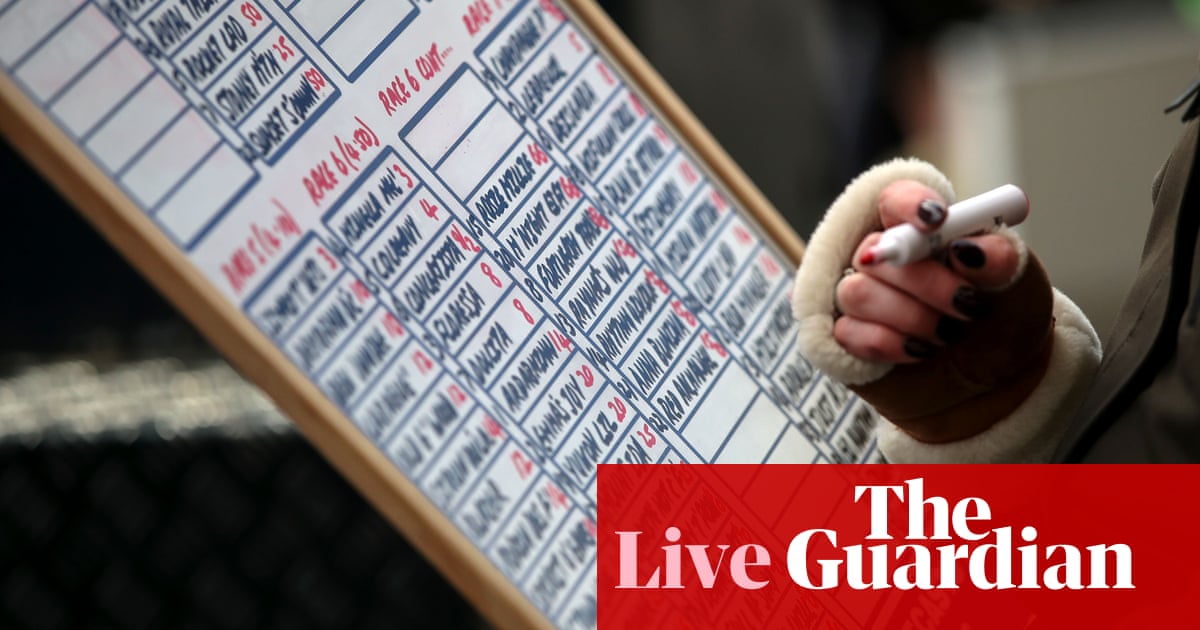 Already a winner at this Festival, Jamie Codd returns to the fray for what has been his most fruitful race. The amateur has won this four times in the past 11 years and teams up again with Le Breuil, on whom he won the National Hunt Chase last year. He hasn’t won this season but that was also true for nine of the last 12 Kim Muir winners.

Deise Aba is probably ahead of the handicapper, following his Sandown win on just his fourth start over fences, though whether he is quite quick enough for this is open to question. Fingerontheswitch is having a grand season but is flying up the weights in consequence.

Fitzhenry is a JP McManus horse who looks nicely treated on the best of his form, like his Troytown second. Champagne Platinum is a JP/Nicky Henderson horse who stayed on well at the end of the Scilly Isles to be third. He surely has more to offer and cheekpieces first time may get it out of him, along with the crack amateur Derek O’Connor.

Here’s a funny thing, a race that has only ever been won by Willie Mullins (it’s only been run four times) and yet some other trainer somehow has the favourite. Minella Melody occupies that position for Henry de Bromhead, having won a key trial in January, beating Colreevy. She is unbeaten over hurdles and looks classy.

Concertista, whose odds halved to 5-1 during Wednesday, was beaten just a short-head in this race a year ago, her first start over hurdles. She was third in a big-field handicap last time, form which looks solid. Floressa represents the in-form Nicky Henderson and was a bit unlucky last time. Her November win at Newbury puts her in the argument.

Simply The Betts is the obvious one, having improved so much as a chaser this term, and the form of his win here in January was boosted by the runner-up scoring here on Tuesday. Novices like him have a good record and have won this twice in the past three years.

Happy Diva won the BetVictor here in November but has no secrets from the handicapper. Sirruh Du Lac made all to win this last year and may have had his excuses for a November flop, his only run since.

La Bague Au Roi doesn’t look badly treated for this switch to handicaps. Oldgrangewood is a strong finisher who seems likely to get the strong pace that he needs.

Paisley Park was a hugely popular winner last year and has not been beaten since, most recently pushing past Summerville Boy in the Cleeve here in January. Judging by last year, he’ll be settled in midfield, which brings the risk of trouble in running, and his stable has been gradually dropping out of form since November. However, it’s not always wise to pay attention to stable form when you’re considering top-class horses, I’ve found.

Summerville Boy has not built on his Supreme win from two years ago but he ran well on his first try at this distance in the Cleeve and may have more to offer. City Island returns to hurdles for the first time since last season, when he beat Champ in the Ballymore. Emitom slogged through the Haydock mud to win the Rendlesham last month, but that hasn’t been an influential trial.

Penhill, the 2018 winner, seems to be working his way back to form. L’Ami Serge has masses of talent but often would rather hide it under a bushel and would be the oldest winner since 1986. Apple’s Jade also seems to have lost her enthusiasm for the game, though she ran to a high standard at Christmas and blinkers may help. Richard Johnson is a surprising booking, with Davy Russell unused.

A Plus Tard is back at the Festival, having hosed up in a handicap last year. He was last seen beating Chacun Pour Soi over Christmas, a fine effort even if the runner-up needed the outing. With the De Bromhead/Blackmore combination going well, he seems set to run another big race, but dangers abound.

Frodon won this last year under a great front-running ride and returned to form last time. Min doesn’t have to face Altior for the first time in four visits to the Festival. It seems timely to recall that he beat Politologue 20 lengths at Aintree last April.

Duc Des Genievres has done little since winning a weak Arkle, while Riders Onthe Storm ought to be puggled after his Ascot race last month. Shattered Love is interesting at a big price, having won the Marsh two years ago. She lost her way after that but has had a couple of good moments this winter.

It’s almost four years since Sire Du Berlais left France and the only race he has won in that time was this one, a year ago. That required one of the great galvanising rides from Barry Geraghty, as well as first-time cheekpieces. Can Geraghty do it again, with the help of blinkers this time. Since the horse is 7lb higher, I doubt it.

The Storyteller looks a stronger candidate from the same yard, that of Gordon Elliott. This one won a Festival handicap over fences two years ago and ran on well from the back to nick sixth in his qualifier. Relegate is also a Festival winner, in the Bumper of 2018, and should be sharper for her first run in a year, last month.

Third Wind looks well treated on just 4lb higher for his Wincanton win on Boxing Day, when the free-running Jatiluwih was second. Kilbricken Storm, an Albert Bartlett winner, would be a welcome boost for the Colin Tizzard team. Everyone loves a Nicky Henderson runner just now and his unexposed improver Welsh Saint is proving popular.

Oh my God, they’re backing Samcro again. The horse who was once so hyped that Michael O’Leary had to remind us he wasn’t the second coming of Jesus Christ looks like starting favourite for this, even though his only win in the past two years was a beginners chase in Down Royal.

Admittedly, he was going well when he fell at Fairyhouse in December but was he not beaten on merit when Faugheen left him 10 lengths behind at Christmas? I’d say so and yet here we are. Good luck to the chestnut’s many fans. The risk for Faugheen is that he had a hard race at Leopardstown last month and it’s worth noting that the runner-up, Easy Game, ran no race in the RSA yesterday. Itchy Feet, third in last year’s Supreme and the Scilly Isles winner, seems sure to go well.

Mister Fisher, only eighth in the Supreme, is steadily getting better over fences. In addition to Faugheen, Willie Mullins runs Melon, Tornado Flyer and Bapaume, so he has a fair chance of shaping the race. The ex-French Saint Sonnet won easily at Catterick on his first start for Paul Nicholls but this is a huge step up.

Barry Geraghty hasn’t been top jockey here since 2012 but he’s well on his way, considering three winners was enough to win it last year. This is already his best Festival since 2014 (Jezki, O’Faolains Boy, More Of That). Paul Townend finally got one on the board after knocking on the door with form figures of 4F4233P. Still, Davy Russell’s form figures here this week are better: 20214245. Rachael Blackmore had three rides on Wednesday and was second twice.

Nicky Henderson has managed three Grade One wins already this week and that’s even with Altior being lame. Santini in the Gold Cup is the shortest priced of his remaining runners. Gordon Elliott has got himself another Festival handicap and he’s also had five placed runners in the handicaps so far. Willie Mullins has found it tougher going but, for him, there’s always the Bumper. He’s saddled five favourites in the 14 races so far and they were all turned over.

Furlongs, fancy hats – and a few face masks – for Ladies’ Day at the Cheltenham Festival. This great gallery of shots including some from colleague Tom Jenkins at the races is well worth a look …

Today’s races and our tips

This could be the day when Ireland asserts, or at least I’m hoping so, having put them down for wins in both the centrepieces races and three others as well. Simply The Betts is proving popular after we all saw the form boosted by Imperial Aura on Tuesday. Concertista halved in price during Wednesday, which was a bit disappointing but shows the market isn’t completely sold on Minella Melody. I’m surprised there’s not more interest in Just A Sting, given that he was a popular choice the last day in what used to be the Racing Post Chase.

Congratulations to FillyManilli, who won Wednesday’s competition on a final score of +17, having picked Ferny Hollow (11-1), Champ (4-1) and Politologue (6-1). Robertkeen was second on +16, a valiant effort. Filly, we’ll be in touch with you by email about your prize towards the end of the week.

You could win a £100 account credit from Betfair by proving your tipping prowess on today’s races. All you have to do is give us your selections for all of today’s races at Cheltenham. As ever, our champion will be the tipster who returns the best profit to notional stakes of £1 at starting price on each tip. Non-runners count as losers.

Please post all your tips in a single posting, using the comment facility below, before the first race at 1.30pm.

There are seven races at Cheltenham today and you must post a single selection for each race. Our usual terms and conditions, which you can read here, will apply, except that this will be a strictly one-day thing. If we get a tie after all the races have been run, the winner will be the one who posted their tips earliest out of those with the highest score. If an entrant has to repost their selections because of a non-runner, we will use the time of their later posting for tiebreak purposes.

If you don’t win today, don’t despair. You’ll have one more shot at our Cheltenham competition tomorrow (Friday).

The third day of the Festival felt a little like the meeting’s poor relation when it moved from three days to four in 2005, and for a few years, Thursday was the least popular of the week in terms of attendance. But it jumped past the opening day in 2008, when the second day was lost to high winds, and has roared ahead in recent years, relegating Wednesday to a clear last place in attendance and, as often as not, pulling in the second-best crowd of the week behind Gold Cup day.

It’s only a hunch, but my guess would be that plenty of racegoers who can’t handle (or afford) four days in Gloucestershire are coming for the last two days instead, and an afternoon like last year’s Stayers’ Hurdle day, when Bryony Frost and Frodon took the Ryanair and then Paisley Park landed the feature, can only persuade them that they’ve got the balance right.

Anyone who has been tempted to give Thursday a try by last year’s excitement, meanwhile, will be delighted that today’s card not only offers the chance of a repeat performance, but also has the added twist of the old favourite Faugheen, a former Champion Hurdle winner, attempting to win a Grade One novice chase at the age of 12.

The Faugheen-Frodon-Paisley Park treble is currently on offer at around 55-1, so it’s a big ask, but it might be worth a couple of pounds just in case.

The action switches to the New course for the final two days, the sun is out at Cheltenham and the official going for this afternoon’s card is soft, good-to-soft in places. Chris Cook’s tips for the seven races are here – including a 14-1 pick to beat Paisley Park – and the action is under way at 1.30pm GMT.