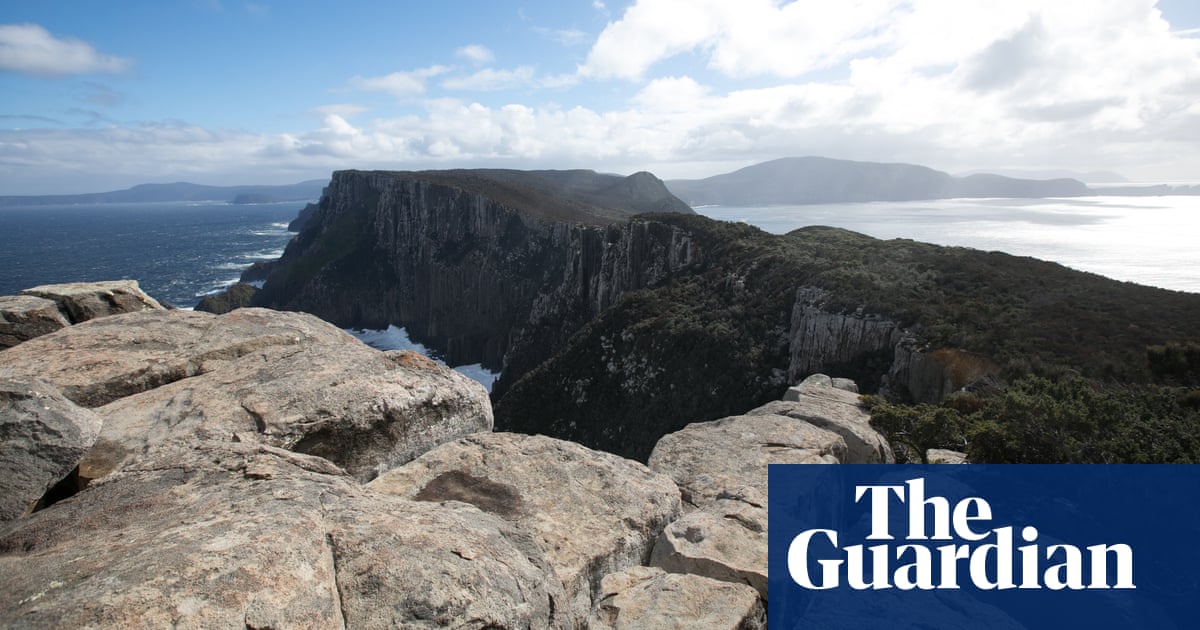 Standing on the top of the Blade, looking out over Tasman Island as the waves crash against the rocky cliffs below, the realisation that I’m close to the very edge of the world rushes over me. In that moment, I feel small and very isolated. With that vast view ahead and only the trees behind me, I take a few deep breaths and try to steady my racing heart. I’m on the third day of the four-day Three Capes Lodge bushwalk through the Tasman national park. The Blade is a dolerite column on the edge of Cape Pillar along the remote southern coast of Tasmania. And getting to that point has taken some doing, yet in that breathtaking moment, it’s all worth it.

The trip begins at Stewarts Bay, a small bay on the peninsula outside Port Arthur and a 90-minute bus ride from Hobart. In the early morning light, our group of hikers climb into a small boat that carries us across the bay to Denmans Cove, the walk’s official starting point. It’s cold, it’s beautiful and there are 46km of bushwalking ahead of us over the next few days.

The Tasmanian tourism industry is growing rapidly, and according to Tourism Tasmania, more than 1.3 million people have visited in the last year. There is plenty on offer for hikers and bushwalkers, particularly those looking for a luxurious wilderness experience. The Tasmanian Walking Company currently has three private hiking tours that take in the Cradle Mountain Huts, the Bay of Fires and the Wineglass Bay. The latest addition is the Three Capes Lodge walk, a private guided tour with three nights’ accommodation in luxury ecolodges along the way.

As we set off on our first day, walking south, the scenery changes from dramatic coastline to that of a eucalypt woodland. It’s the first day of spring, the colours of the forest are ready to burst and the edges of our path are sprinkled with yellow wattle and common pinkberry. When a light shower hits, we stop to throw on our rain jackets, the first of many times when the art of clothes layering will come in handy on this trip. Walking along the peninsula means there is water on all sides of the track. This creates a maritime climate, and walkers are likely to experience wind, sunshine and rain all in the space of an hour. The temperatures also fluctuate wildly, with Antarctic winds and almost freezing temperatures one minute and then moments of summer stillness.

Walkers are told to pack only 7.5-9kg of gear for the lengthy trip. As a photographer, this was always going to be a challenge, but who needs pyjamas when you’ve got camera gear? On our hike, we walk through wildflowers-strewn Australian scrubland and through tall forests which blow loudly in the winds. We also climb Arthurs Peak, which is 300 metres above sea level, and gaze out dolerite cliffs, some of the largest in the southern hemisphere.

We stop at Crescent Lodge on the first night, a warm and welcome refuge after the wild weather. These private ecolodges were designed by architect Andrew Burns and have environmentally friendly features such as tank water, compost toilets, solar and wind-generated power in an attempt to reduce the impact on the park.

There has been some criticism of the project, with the Wilderness Society and the Greens raising concerns about commercial activities within publicly owned reserves. Vica Bayley, spokesman for the Wilderness Society, told the Mercury: “There is nothing eco about privatising publicly owned reserves and clearing forest previously protected in a national park to build luxury lodges, ‘relaxation pavilions’ and to open up a nice view.”

But Heath Garratt, general manager at Tasmanian Walking Company, says while he knew there would be discussions around the project, the company focused on keeping impacts to a minimum. He argues hikes like this give people who would ordinarily not engage with national parks access and he says many walk away from the experience with an increased sense of environmental responsibility. I can understand the objections but the company seems to be doing its best.

I’m excited when I wake up the following day. This is to be the day with the longest walk, a 17km day trip to Cape Pillar, out to the Blade. The breathtaking view is as lovely as I’d hoped, and our group stays up on Blade for lunch. Then we move to Seal Spa, another spot on the walk with a view of the lighthouse on Tasman Island.

As we head to Cape Pillar lodge that night, my body is feeling the strain of walking weighted down by camera equipment. One of the highlights of the trip is a one-hour massage. As someone who only has a massage when I’m injured, this feels particularly special. Under the masseuse’s hands, the fatigue and strain melts away. Later that night, I step outside for a view of the night sky. The stars are captivating, ever-changing because of the cloud coverage – and as bright as I have ever seen.

The final day of the hike is a six-hour, 17km walk up to Mount Fortescue. At 482 metres, it is the largest hill we’ve climbed so far; the higher we get, the more breathing breaks we take. The temperature drops as we reach the peak, and the vegetation changes. Then when we descent the hill and reach the the forest floor, it is filled with Dicksonia antarctica, one of the world’s oldest giant ferns, and as we walk through, the ferns creates a canopy.

We emerge closer to the coastline. The skies have cleared and seeing Cape Pillar in the distance shows just how far we’ve come on this walk. It’s difficult to believe we’re in the same country, let alone the same state, as we move through these changing environments.

We stop for lunch at a junction called Only Here, where hikers can choose to go off on a two-hour round trip trek to Cape Hauy or continue the lighter walk down towards the end of the hike at Fortescue Bay. We decide to head to Cape Hauy, which is as dramatic as Cape Pillar, although the beauty of Cape Hauy is matched by the number of stairs we will have to climb. When we arrive at the cliff, I can see the Totem Pole, a freestanding dolerite pillar that shoots straight out of the ocean. It’s easy to see why rock climbers from around the world have taken on the 65-metre column.

When we return from the side trip, we head towards Fortescue Bay for the last leg of the hike. As we turn a final corner, the bay comes into view. The water is intensely blue, the sand clean and white and the beach bordered by plants and grass. We stroll to the beach, passing curious wallabies along the way.

As my feet sink into the sand and I unload the backpack, I take a moment to take in the beauty and the tranquility. About 30 metres offshore, a southern right whale and her calf are splashing around in the bay. It’s completely entrancing. I sit down next to Mitch Anttilla, one of the guides whose knowledge of the national parks, plants and animals has made the trip so fascinating. He tells me he’s about to turn around and head off to pick up the next group. For me, it has been a once-in-a-lifetime experience, but for Antilla, he’s off to do it all over again tomorrow.