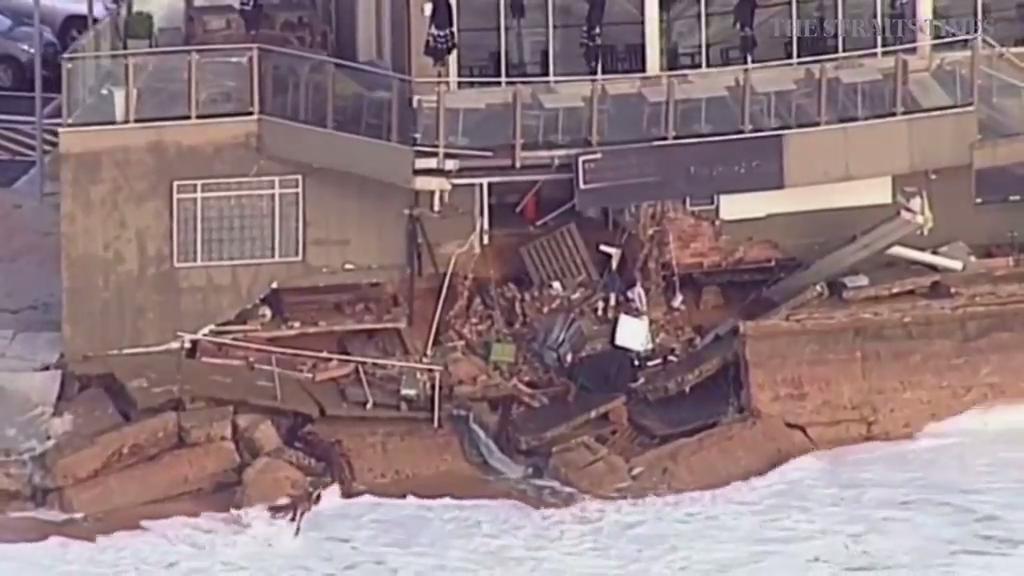 SYDNEY (REUTERS/AFP) – A weekend of wild weather in Australia disrupted everything from the Internet to shipping and banking, while pummeling coastal towns and exposing insurance companies to hefty payouts.

Stocks in Australia biggest insurers, including QBE Insurance, Insurance Australia Group and Suncorp, were lower on the Australian Securities Exchange, with the wider market trading in positive territory.

The storm has left at least three people dead and others missing, police said on Monday (June 6).

“This storm, which was so ferocious, has taken life from us,” New South Wales Premier Mike Baird said as he warned that conditions remained dangerous.

The Bureau of Meteorology said a combination of rain, wind and wave action had combined to create the extreme conditions.

Police said divers had retrieved two bodies from cars which had been swept away in flood waters, one in the south-western Sydney suburb of Leppington and another in the town of Bowral, some 100km south of the city.

A clean-up was underway on Monday after a low pressure system that brought flooding and strong winds combined with high tidal surges along much of the Australian east coast started to ease.

Amazon first warned of the outage affecting Elastic Compute via its status page on Sunday afternoon and an hour later confirmed the issue was related to a power problem, the website said.

An Amazon spokesman declined to comment on the matter but Amazon Web Services’ status page on Monday showed several connectivity issues in Sydney had been resolved.

The New South Wales state emergency services said it had received more than 9,250 calls and had conducted 280 flood rescues.

A spokeswoman for the Port Authority of New South Wales state said the Newcastle port, the world’s largest exit point for seaborne thermal coal and used by global miners Glencore , Rio Tinto and Anglo American, was placed on restricted ship movements over the weekend but did not sustain any damage.

Port Kembla, the largest vehicle import hub in Australia remained closed, as the storm moved south, according to the spokeswoman.

Big waves were expected to pound the coast on Monday, with the Bureau of Meteorology predicting another day of dangerous conditions, chiefly south of Sydney.

Banks also needed to restore services to automated teller machines that went down.

Mobile, ATM and point-of-sale banking services had been restored after an outage late on Sunday, Westpac said. “While we aim to ensure continuity of our systems, the severe storm system created disruptions across our network which impacted our services,” it said.

Commonwealth Bank said some of its customers were affected by intermittent problems with another ATM provider.

Jan Van Der Schalk, a CLSA analyst said IAG and Suncorp faced few catastrophes in fiscal 2016, ending on June 30. “Hence, there should be no earnings impact because of this event,” Van Der Shalk said.

Insurers said it was too early to tell what the impact might be.