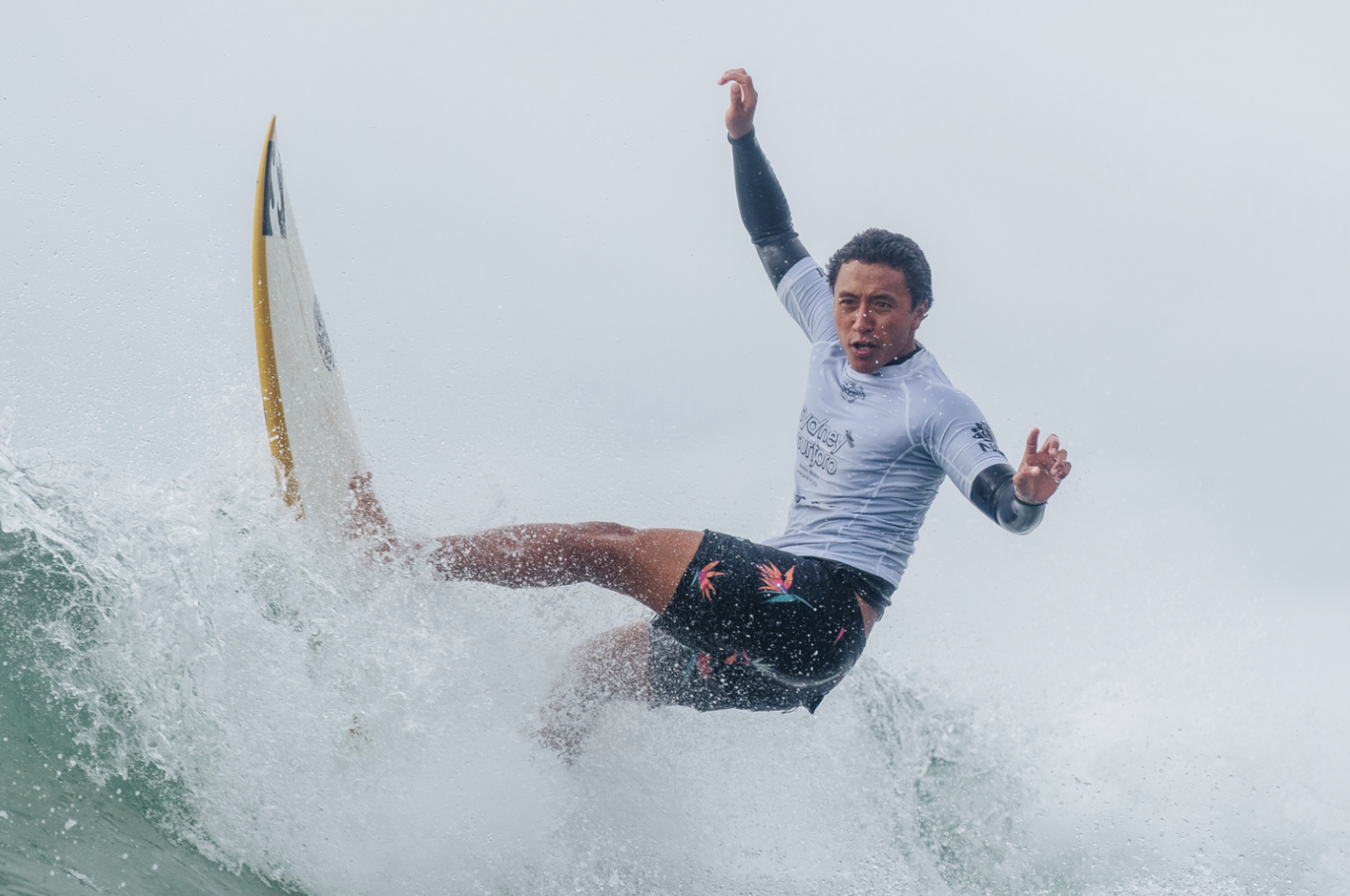 World Surf League: MANLY BEACH, SYD/AUS (Tuesday, March 10, 2020) – It’s been a tough day for the top seeds at Manly as some of surfing’s biggest names have fallen out of the draw on Day 3 of the Sydney Surf Pro WSL Challenger Series. Competitors in Men’s Round 2 surfed through great conditions in the morning with the low tide deteriorating conditions late in the day.

Hawaiian favourite Josh Moniz (HAW) got his 2020 Challenger Series event off to a great start, overcoming Australian Olympic Team hopeful Owen Wright (AUS) in one of the opening heats of the day. Moniz surfed a smart heat, getting busy early in the high tide conditions as Manly to find two scores off the bat and progress through with Mihimana Brae (PYF) while Wright and Ian Gentil (HAW) were eliminated from the event. With his younger brother Seth taking out the Championship Tour Rookie of the year in 2019, Moniz is keen to get on a roll in 2020 and join his brother at the elite level in 2021.

“It was funny because before the contest started it was pumping then as soon as the hooter went it felt like it almost stopped,” Moniz said. “I was pretty nervous because I had a tough heat and If I had a slow start it would be hard to chase everyone down. I’ve always done well in Manly so I was really happy to hear that they had upgraded it to a Challenger series event because if you get a good result here you’re in a good position heading into the rest of the year. My goal is definitely to qualify for the CT. It’s been so cool watching my brother on the CT and seeing him deal with the pressure and hold himself so well so I definitely want to be joining him on tour next year.”

Fresh off a win at the recent Surfest Newcastle Pro, top seed Julian Wilson (AUS) came to Manly as a clear favourite. Wilson’s campaign started well, with the Australian Olympic Team hopeful taking an early lead. In waves that replicated what is expected in Chiba for the 2020 games, Wilson looked like he would comfortably progress through his heat until former World Junior Champions Mateus Herdy (BRA) found a raming right-hander and launched a solid air-reverse to post an 8.00 and relegate Wilson into third, and out of the event.

“When I saw the names in that heat I knew it was going to be a really hard one,” Herdy said. “Julian is someone I’ve always looked up to so it was cool to share a heat with him. There were so many waves coming in the last few minutes so I knew I had to put myself in first place to be safe and I ended up finding a good one that gave me some good opportunities. I’m so stoked to make it through that one and be in the next round.”

Sunshine Coast resident Reef Heazlewood (AUS) wowed the crowd with his aerial antics, posting the highest two-wave combination of the event so far. Reef’s 16.90 heat total included the highest single-wave score of the event, a 9.23 for a huge full-rotation air reverse. Heazlewood will progress into Round 3 where he’ll look to continue to raise the bar at Manly.

“I was actually really nervous before that heat,” Heazlewood said. “I couldn’t work out what the best option was for my positioning but eventually stuck to my guns and once I had a score I just went for airs for the rest of the heat. Just when I was about to move over to the right, a left came and I was able to find a nice ramp on it. I’m hoping to find a few more like that during the event and maybe drop a few perfect 10’s hopefully.”

Former World Junior Champion Maxime Huscenot (FRA) was another competitor who went big on Day 3, also posting a 9.00 point ride for a massive air-reverse. The French competitor was unstoppable as he looks to solidify himself in the qualification bracket early in 2020.

“I was really happy to land that air,” he said. “I wasn’t landing any of those in the previous event and it’s my favourite maneuver so I’m super stoked to land this today. This is the most important competition so I’m happy to land it now. I really love the new format and having the Challenger Series, I really love surfing against the best surfers from all around the world. To me, this is the best way to push my limits and showcase my best surfing. I’m happy that we have two Challenger Series events right at the start of the year. Last year at this time I was injured, so I couldn’t come to Australia. It is good to be back. I love it here in Australia.”

Armed with a new board and fresh off a win at the recent Vissla Central Coast Pro at Avoca and a quarterfinal finish at Newcastle Surfest, Matt Banting (AUS) kept his momentum going as he smashed his way through his Round 2 heat. Having won the event in its inaugural year, back in 2012, Banting showed he still possessed the skills to claim heat wins as he performed a mix of powerful snaps and carves and aerial manoeuvres to post 14.76 two-wave heat total. Banting will now face Thiago Camarao (BRA), Jake Marshall (USA) and 2019 event winner Jordy Lawler (AUS) in Round 3.

“I jumped on a brand new epoxy this morning that Britt Merrick shaped me and it felt amazing out there today,” said Banting. “I began that heat behind the eight-ball and began to feel a bit stressed out there. Thankfully I was able to turn it around in the end, but it definitely a well-executed heat plan. I was a bit unhappy with myself when I took a closeout with priority, so I just thought I’d try something big and when I didn’t make it, I knew I needed to reassess. I would say I definitely feel comfortable here and it feels like a bit of a second home for me.”

Once Men’s Round 2 was completed, the first four heat of Women’s Round 3 hit the water. Standouts in the early heats included Macy Callaghan (AUS), Keala Tomoda-Bannert (HAW) and Sophie McCulloch (AUS) while crowd favourite Bethany Hamilton and CT competitor Nikki Van Dijk (AUS) were both eliminated.

Event to seed Sally Fitzgibbons (AUS) and former two-time World Champion Tyler Wright (AUS) competed in the last heat of the day with Californian Alyssa Spencer (USA). Unfortunately for Fitzgibbons, it was Spencer and Wright who took the top two spots leaving Sally to be eliminated from the event.

WSL Event Directors will reconvene at 6:30 a.m. local time to make a call on competition for a possible 7:00 a.m. start with the remaining heats of Women’s Round 3.

The World Surf League (WSL), established in 1976, is the enablement platform for surfing and surfers worldwide. The WSL is dedicated to changing the world through the inspirational power of surfing by creating authentic events, experiences, and storytelling to inspire a growing, global community to live with purpose, originality, and stoke.

The WSL is a global organization, headquartered in Santa Monica and with regional offices in North America, Latin America, Asia Pacific, and EMEA. The WSL possesses a deep appreciation for the sport’s rich heritage while promoting progression, innovation, and performance at the highest levels.

The WSL is comprised of Tours & Events, celebrating the world’s best surfers across all disciplines and annually running more than 180 global contests and crowning the undisputed World Champions across all divisions; WSL WaveCo, where innovation meets experience; and WSL Studios, which offers best in class storytelling across competition, lifestyle, and conservation.
For more information, please visit WorldSurfLeague.com

Coming This Weekend: ‘Bustin’ Down The Door’