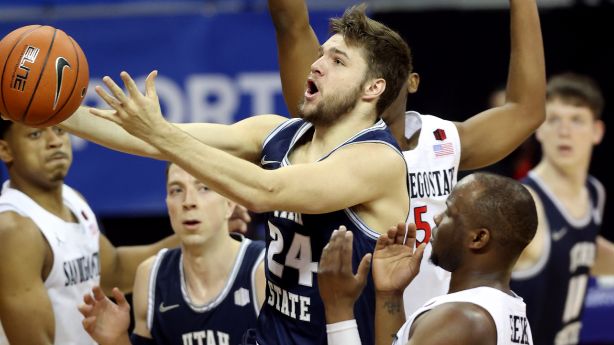 SALT LAKE CITY — Rollie Worster’s time with Utah State is over, and his time with the University of Utah is about to begin.

The sophomore-to-be point guard from Missoula, Montana, spent as little time as possible in the NCAA’s transfer portal, pledging his commitment to the Utes on Thursday less than a week after sources confirmed to KSL.com that he had entered the portal.

The 6-foot-3, 200-pound guard averaged 9.1 points, 3.5 assists and 3.8 rebounds per game as a freshman with the Aggies, where he started 25 of 26 games for an Aggies squad that won 20 games and qualified for the NCAA Tournament for a third straight year. That includes a near-triple-double Jan. 28, when he finished one rebound and one assist shy of the prestigious mark in an 83-74 win over UNLV in Las Vegas.

Worster was a two-time Gatorade Montana player of the year at Hellgate High School, where he averaged 20.7 points, 7.1 rebounds, 4.5 assists and 2.3 steals per game. Prior to signing with Utah State, he was also recruited by Boise State, Montana and Pepperdine, among others.

But Salt Lake City always seemed like his new destination. His head coach Craig Smith moved up to the U. following the departure of former coach Larry Krystkowiak, and Worster’s departure into the portal came just moments after new Aggies coach Ryan Odom was put in charge in Logan. Smith brought along former Utah State (and South Dakota) assistant Eric Peterson to complement his staff that also includes former Utah and UNLV assistant Demarlo Slocum, and earlier this week retained his former Utah State director of basketball operations Curran Walsh to the same role on the Hill.

Add to it the recent decision of the NCAA’s Division I council to allow a one-time transfer exemption, as reported by the Associated Press and other media outlets — a rule change that provides athletes in sports like football and men’s basketball the same luxury of transferring without penalty provided by Olympic sports like baseball, wrestling and lacrosse — and the timing was right.

Under the new rules, Worster would be eligible to suit up for the Utes immediately, just like UNLV transfer David Jenkins, Jr., the Tacoma, Washington, native who played two seasons at South Dakota State prior to moving to Las Vegas (where he met Slocum).

With around 1,300 men’s basketball players in the portal, according to even the most conservative estimates, the player carousel will rival — or even top — the usual college basketball coaching carousel of this time of year, a run of new coaches that includes a change at one of the top jobs in the country as longtime Gonzaga assistant Tommy Lloyd replaces Sean Miller at Arizona.

The Utes had as many as four players in the transfer portal this season, as many as nearby rival BYU, whose list of potential transfers includes Utah Valley commit Connor Harding. Utah State has been slightly less touched by the portal — star center Neemias Queta will depart early for the NBA draft, but foundational forward Justin Bean has already re-committed to Odom and the Aggies, for example — but even the Mountain West contenders of three straight seasons are seeing roster flux.

Utah’s Timmy Allen has committed to Texas, and Alfonso Plummer remains in the portal, with a final-five of destinations that includes Illinois, Texas Tech and BYU, he announced Thursday on social media.

The offseason is just getting started.

Italian women take more top jobs, but many have no job at all