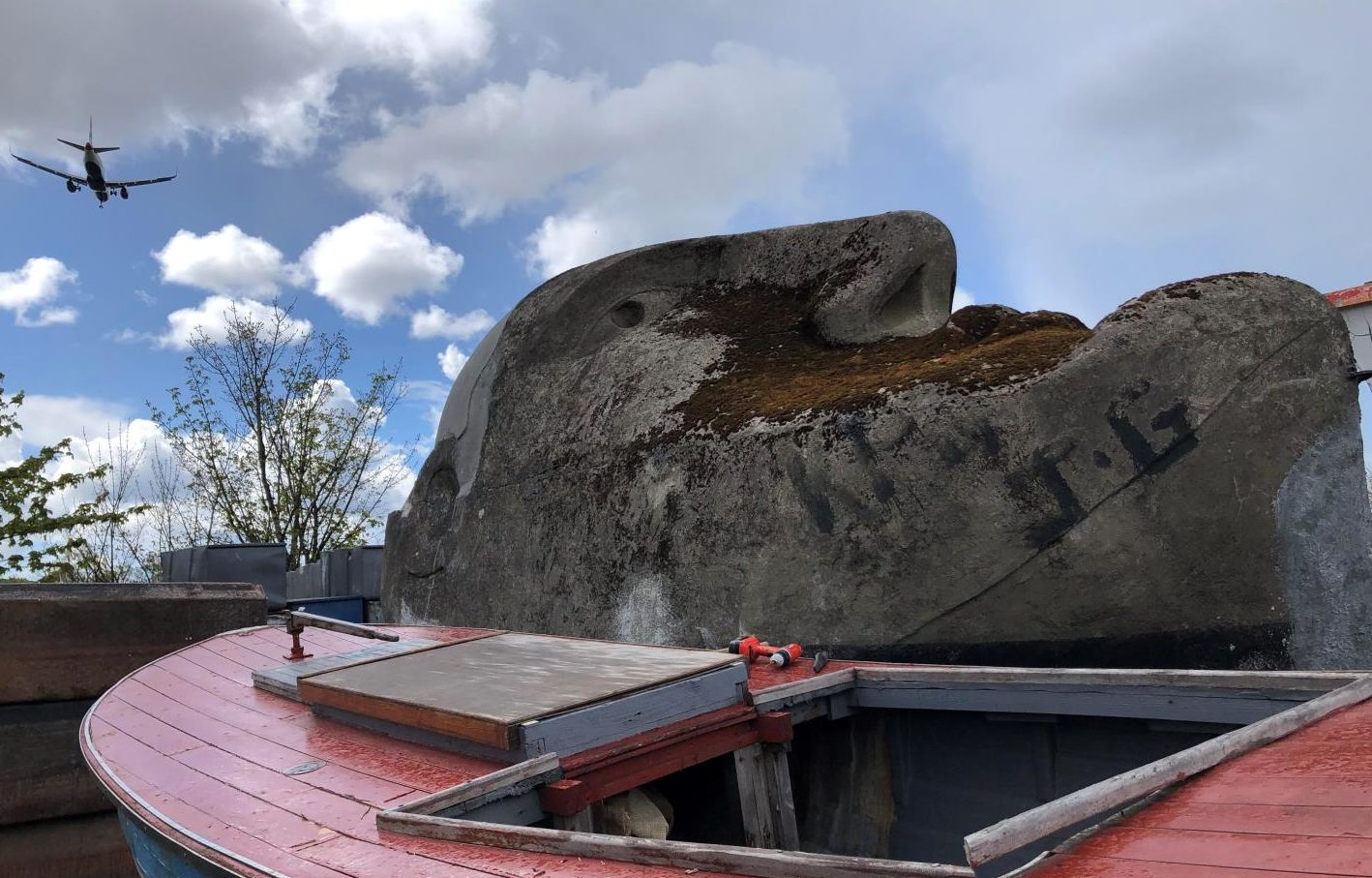 Hidden away among the yachts at a Clydebank boatyard, a not-so-little piece of history is preparing to return to the water and back into the public eye.

Covered in moss and with a little crack or two around its exterior, the giant Floating Head sculpture from Glasgow’s 1988 Garden Festival is to be refloated on the Clyde to coincide with another big event at the same location, the COP 26 environmental summit.

After a crowdfunding campaign, the family of original sculptor Richard Groom, who died in 2019, have teamed up with the Sculpture Placement Group to arrange the necessary repairs and get it back into the river safely.

Richard’s older brother Andy said: “We’re absolutely delighted. The enthusiasm we’ve gathered from all our supporters has been stunning, we’ve been blown away. We couldn’t imagine it when it was first rumoured at my brother’s funeral.

“To a certain degree it’s a memorial to him, but also to the people of Glasgow and the Garden Festival. It’ll be fantastic for everyone to get it back into the water.

“Have you seen many of these around? This is unique, there is only one of these. We’d like it somewhere where people can enjoy it forever.”

Having narrowly escaped being destroyed, Floating Head is in remarkably good condition.

Commissioned especially for the festival, it was one of five sculptures built for display with the help of shipbuilders from the Govan docks. The idea was to bond the city’s industrial heritage with the art-making process.

Over three decades on, it was tracked down by Richard’s family – with a little help from Google Earth, where it can be seen in all its glory.

Groom said: “It was strange seeing it again. We were delighted we found it, and coming to see it up close again was quite emotional.

“The surveying team have been out and it’s not a clean bill of health yet, there’s a bit of repair work needed, but it’s in good nick.

“As a sculptor Richard was very talented, as a marine construction engineer maybe not so much! He won the bid to do it and came to Clydeside to get it built using skills from people from the city.

“He was pretty stressed doing it and it was up against the deadline. When we first launched it, it kind of didn’t float – sank is the word we’re looking for – because there were four really big holes where it had been supported when it was being built. But we fixed it, and it floated for all of the festival without any further issues.

“Richard would be stoked we’re re-launching it but he’d be laughing too.”

A highly-skilled artist, Richard Groom’s early career saw him exhibiting sculptures in a London gallery and also working as a stone carver for many of Scotland’s most-loved buildings.

He taught stone carving at Telford College in Edinburgh, and remained a passionate champion of both traditional sculpture skills and the preservation of the built environment until his death in 2019.

His mother Audrey will cut the ribbon when Floating Head is relaunched, with plenty of backers looking forward to seeing it on the water once again.

Kate V Robertson of the Sculpture Placement Group said: “We had a feeling it might resonate with people because there’s a lot of fondness around the Glasgow Garden Festival. We thought we’d get a good response but it was great to reach and exceed our target.

“I think it’s really iconic and unusual. It has a symbolic association with the Garden Festival, a way to remember the bigger impacts of that event. I think people want to see it floated again as a mark of Richard’s legacy and to celebrate his life.”

The plan is to float the sculpture in the Govan basin, in time for Doors Open Days in September and COP 26 in November.

The giant concrete floating head would become a talking point, providing both memories of the past and thoughts for the future.

“There are so many different things you can spin off from thinking about it,” Robertson explained. “It’ll be floating behind the Science Centre so audiences there can tap into thinking about maybe the physics of floating.

“It was fabricated by the artist alongside shipbuilders who had been welding in the Clyde yards, which at that stage had mostly ceased. There’s that history that you can tap into too.

“We’re interested in sculpture and how it can be used to instil pride of place or to serve communities or as a way to deliver engagement and education activities.

“It’s really interesting the number of strands you can pull around it. It’s part of our heritage and it was very nearly lost. We think it has survived this long so it should be seen again.”

There are parallels between COP 26 and the Garden Festival beyond just the shared location, with both aimed at looking to a greener, brighter future.

Robertson said: “COP 26 is a really great opportunity to link back that heritage between the two events. The Garden Festival was all about how we imagined a new future for the industrial site that needed a new purpose. COP26 is all to do with different ways to live for the planet.

“I think a lot of it will be quite inaccessible to people who live locally, it’s going to be a quite closed event. How much will people really relate to it? Things like the Floating Head having an association with COP 26 but also being visible and accessible, operating on a symbolic level, is a way in and a visible marker. I think it has value in that respect.”

The group has applied to be part of the COP26 programme and is awaiting a response.

🗿 Thank you for supporting our Floating Head project Crowdfunder, we raised over £7K over the course of the campaign,…

“We’ll float it anyway, even if it’s before the summit. The parties involved in terms of the piece of water don’t have a problem with it going in,” Robertson said.

“We’re hoping to float it in September for Doors Open Day and then it will catch COP26 and then we’ll take it back out the water for the winter.

“We hope to find a permanent location for it, bringing it back into the public will hopefully reignite interest and people will get behind the idea of putting it somewhere.”