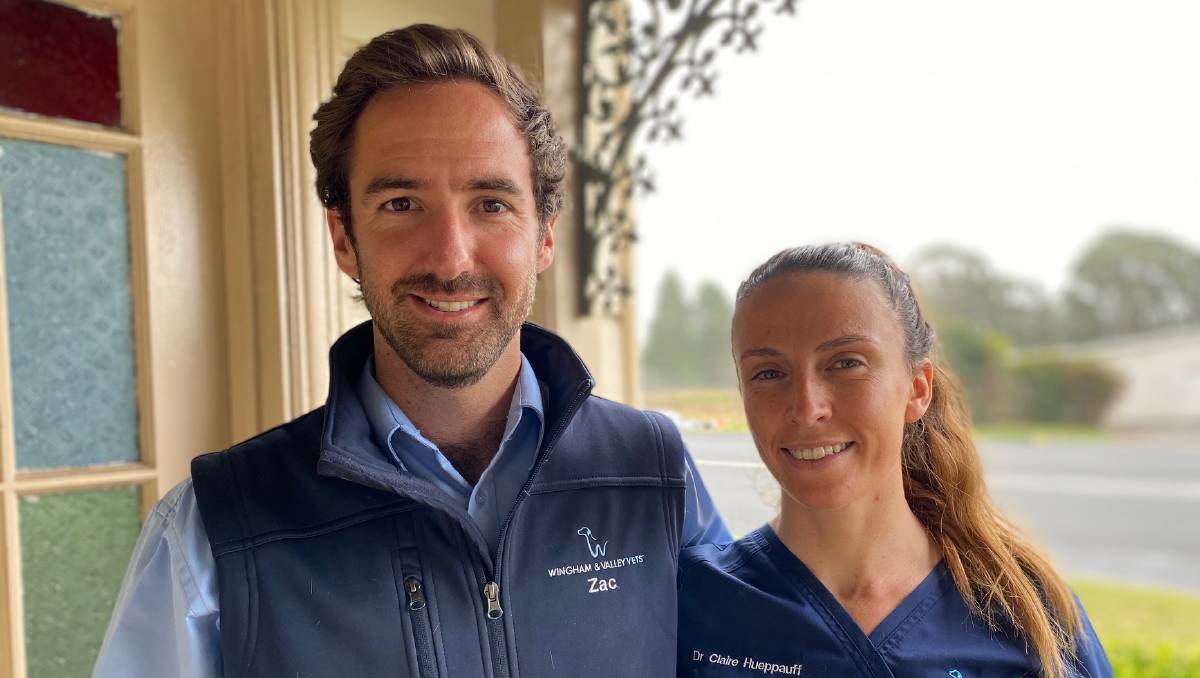 A lot of businesses have found trade slow since the start of the pandemic, but not Wingham and Valley Vets. It has been busy enough in animal medicine that they have employed two new veterinarians to join the team.

Meet Zac Lynch and Claire Hueppauff, who have been working at the Wingham clinic since June 2020.

Zac and Claire come as a pair and now live at Old Bar with their border collie, Jasper, and two cats, Oscar and Tillie. Zac says Jasper is “very naughty”.

The couple both studied at University of Adelaide and worked together in mixed practice in the Hunter Valley, primarily around Maitland. They travelled for 12 months and worked in the UK for three months. After arriving back in Australia, they have been locuming at various practices, one of which was a stint at Wingham in January this year.

Their working during January impressed Wingham and Valley Vets directors Michael and Alissa Healy enough that they were both offered permanent positions later in the year.

Their relocation to Wingham this time around was a bit of shock to the system. Previously they had been here just after the bushfires.

“It’s changed a lot since then. It was smack bang in the middle of the drought as well. Everything’s been transformed now,” Zac says.

Claire says the landscape looked stunning when they came back.

“It just started to rain as we left and things started to green up a bit. It was definitely a lot different in January than now.” she says.

“We’re both from north west Victoria,” Zac says. “So we’re used to it being a bit drier. That’s why we love it so much up here.”

“We get out most weekends and do something. There’s a lot of opportunity around here to do that,” Claire says.

“I like the weather a lot,” she laughs. “In South Australia it gets pretty cold and miserable in winter, and up here it is just stunning greenery and scenery. Everyone’s really lovely – Old Bar has a nice community vibe.”

Zac agrees and says Wingham does, too. And they are both grateful to be working where they are.

“We really like it here. Everyone is really supportive and lovely at the clinic,” Claire says.

Zac adds that it’s great to be working at such a progressive practice that takes professional development seriously and is always keeping up with what is new and emerging in veterinary medicine.

“Thank you to Wingham for being so inviting. We’ve definitely noticed it’s a very nice and friendly client base. Everyone’s very grateful,” Zac says.