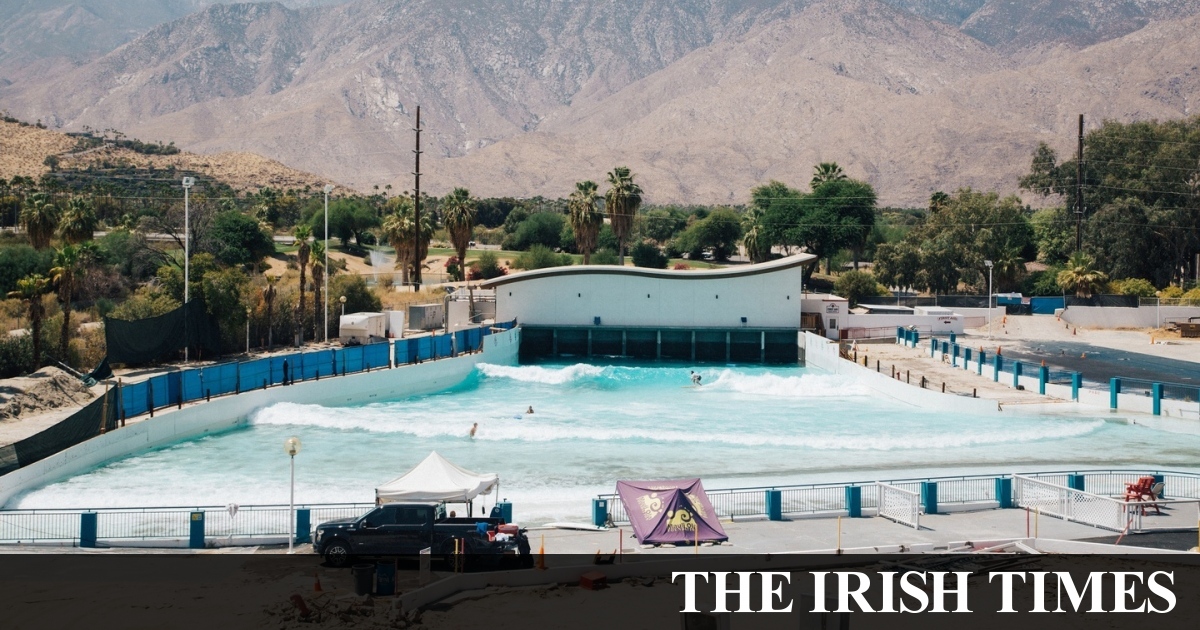 A surfer on a 5-foot wave, crouched and grabbing the board’s edge, emerged from behind the curl of the water to onlookers’ cheers. Who did he have to thank for the perfect swell?

Tom Lochtefeld, who stood at the water’s edge – a hundred miles from the ocean. At a shuttered water park in the desert landscape of Coachella Valley in Southern California, Lochtefeld has transformed a pool into a surf spot. For decades, inventors like Lochtefeld have struggled to mimic the ocean’s swells. In recent years, commercial projects and proof-of-concept pools have made good on the dream.

Now, there’s a global expansion race, driven by the demand of surfers to ride on specifically designed waves and by landlocked newbies who want to try the sport but on gentler, more controlled waves. At least half a dozen companies are designing wave pools and pitching their technologies as the gold standard, though some surfers scoff that only the ocean produces true waves.

“You can make the perfect wave, but if you can’t reach people, what good is it?” asked Lochtefeld, who is perhaps best known for spearheading FlowRider, an early stab at simulated surfing, found on cruise ships and in water parks.

Since then, competition emerged, including from a surfing legend and the prolific company Wavegarden, in a business where the price tag on designing and building a surf park can be anywhere from $10 million to $30 million.

Lochtefeld wants to reaffirm his status as an artificial wave vanguard. His odyssey started in 1987, while surfing shallow waves at Big Rock in San Diego. By then, he had already been through multiple careers. Tax lawyer. Real estate speculator. He was a founder of Raging Waters, a water theme park with a wave machine, albeit for wading, not surfing.

But while surfing that day, he realised that he could create a wave by shooting water over a curved surface. Lochtefeld and friends – assisted by a hydraulics lab at Scripps Institution of Oceanography – built a machine that sculpts thousands of gallons of water a minute into a stationary wave that approximates surfing.

FlowRider was born and hundreds of the machines were sold. Customers of a larger version, FlowBarrel, include the crown prince of Abu Dhabi. But those waves are not ridden on a surfboard. Instead, users jump on a smaller board that’s more like a skimboard.

For Lochtefeld, waves closer to the real thing beckoned. He wanted more people to experience surfing. To finance what became an obsession, Lochtefeld in 2014 sold the FlowRider business, and, three years later, his beachfront home in San Diego.

“I get a vision and stay very focused for a long time,” Lochtefeld, 68, said. Breaking from his measured cadence, he added that his wife of 38 years has been “extremely patient.”

At the closed water park, amid colorful water slides and a parched lazy river, Lochtefeld’s pool will be expanded for longer rides, from seven seconds currently to up to 15 seconds. It’s the centerpiece of a planned resort, Palm Springs Surf Club, that is expected to open next year, and one of four surf parks in development in Coachella Valley.

Developers are banking on proximity to coastal surf markets. They also hope the coronavirus crisis, which has slowed development in some cases, eventually gives way to pent-up surf tourism demand. The waves at Lochtefeld’s park are created with a combination of supercomputing – some 10 trillion calculations a second – metal chambers and pulses of air. Competitors take a different tack, such as using submerged hulls zooming across tracks or synchronised, wave-generating panels.

With the pool as proof of concept, Lochtefeld’s company, SurfLoch, is under contract to create waves at eight other developments, including in Spain and Australia. The company recently finished a private surf park in Connecticut.

The surf park business turns on volume: The more waves in a park, tailored to both beginners and experts, the more paying surfers. And Lochtefeld is up against a surfing great, Kelly Slater, an 11-time world champion, who is also staking a claim in the wave pool market.

In late 2015, Slater unveiled the Surf Ranch, a wave pool powered by submerged hydrofoils. The 45-second barreling wave, still considered by observers to be the best and priciest on the market, allows for big turns and aerial maneuvers.

The wave has been used as a training ground for professionals and a competition site for the World Surf League, and has been rented out to private groups.

World Surf League Holdings, the parent company of Kelly Slater Wave Co., is looking to build new pools in the Coachella Valley and Australia, according to news media reports. Another strong competitor, Wavegarden, a Spanish company, is behind five wave parks, two of which suspended operations because of the pandemic. Five Wavegarden parks are under construction, and the company has an additional 35 projects in the development pipeline.

Before the pandemic temporarily closed the park, Wavegarden’s Urbnsurf Melbourne produced hundreds of waves an hour, from white water for beginners (about $50 an hour) to thick, barreling waves for advanced surfers ($93 an hour).

Sean Young, head of development projects at Wavegarden, said the company’s stand-alone surf parks are economically viable but a more lucrative model is partnering with larger real estate developments. But engineering issues continue to plague early projects, and cost overruns and the process of obtaining permits can still derail plans. Surfers have debated the merits of the artificial wave boom.

Would surf lineups become packed with hordes of park-trained surfers? And are surf parks a soulless commodification of what nature provides for free? Critics also point to the environmental effect of the vast parks. Operators say they’re taking the environment seriously, including in some cases using renewable energy to power operations and employing measures to save water and not deplete sources.

In a bid for sustainability, Lochtefeld is experimenting with Photovoltaics – a solar energy source – and other technology. Lochtefeld said he’s also working on new wave shapes, amid “infinite permutations” now that he’s honed the technology.

For me, an average surfer, Lochtefeld’s pool felt like ocean surfing: the weightless drop, and balancing on a kinetic, ephemeral force. Lochtefeld even created waves with variability, and that unfurl from right to left, and vice versa. But it felt surreal when mechanical rumbling signaled coming waves, instead of a distant bump on the horizon.