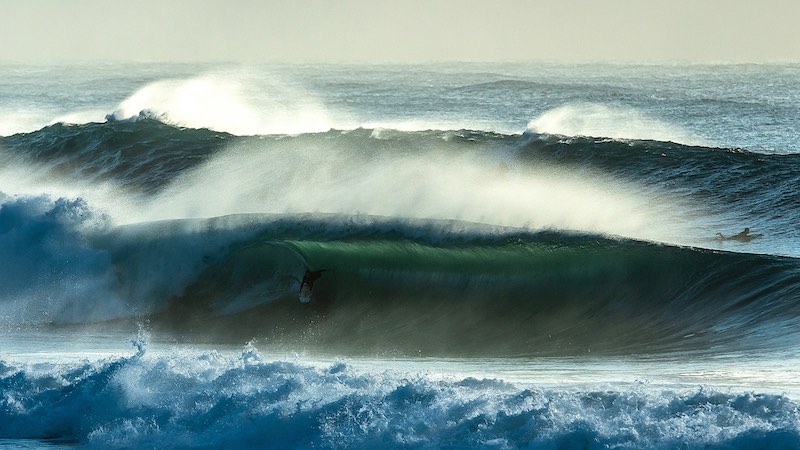 The scene: Sydney, Australia, mid-July. Small surf for nearly two weeks has everyone on edge. A long range forecast map is calling for something nuclear to blow up directly off the coast. The charts have been predicting storms like this one for months. Each time, the storm receded as the forecast grew closer. This time, it doesn’t.

The crazy week of surf that followed begs a question: is Sydney the best city in the world for a surfer? Where else does shit like that even happen?

Tom Carroll, South Narrabeen, Saturday the 18th. Tom, Nathan Hedge and Matt Grainger were among a small crew towing this wild and woolly beachbreak; Carroll later gave this ride to his old Pipeline mate Derek Ho, who’d passed away at almost the same moment it was ridden. Photo: Guy Williment

Forecaster Ben Macartney catches us up on the background to this weeklong spectacle:

“The inception of a complex low pressure system off south-eastern NSW on Monday July 13 was the catalyst for an extended run of heavy surf across the region, primarily impacting the mid and southern NSW coast between Tuesday and Saturday,” he said. “The storm’s impressive size, strength and very slow eastward movement across the central Tasman Sea facilitated two impressive peaks in mid-period SE and ESE groundswell over the course of the week.”

Nathan Hedge, Narrabeen. This wave is about 100 metres from the Hog’s childhood home, but who grows up thinking this will happen? Photo: Ian Bird

“The first and largest pulse occurred on Wednesday 15th, generated by a 40- to 50-knot south to southeast fetch wrapping around the storm’s west and southwestern quadrants. Those winds generated observed set waves ranging from 10 to 15 feet plus across exposed coasts throughout the day, wrapping in across select north-facing breaks to produce one of several exceptional days of 8 to 12 foot surf at Deadmans.”

A grandiose angle on Chris Lougher’s epic Deadmans pit, Wednesday the 15th. One of the best things about the day, and this wave in particular, was the way in which the crew taking it on just shrugged off the chance to self-publicise. When we asked Chris about it, he pointed out the safety aspects of surfing the spot, but otherwise, politely turned down an interview: “Ha ha cheers guys, I’m holding back, not really my scene… I’m stoked everyone is frothin, surfing is about having fun.” Refreshing in a world where it sometimes seems half the population wants to be famous for doing nothing. Photo: Philip Morris

“A gradual easing trend in wave-height and period followed as swell-direction transitioned SE on Thursday 16th through early Friday 17th, preceding the arrival of a second peak in ESE groundswell that came to a head late on Friday, with observed sets in the 10 to 12ft plus range arriving across exposed breaks into the evening. The second, easterly phase of the swell was generated by a long-enduring ESE fetch extending across the low’s southern flank, mostly at speeds of 30 to 35 knots.”

Later in the swell, the Gold Coast got some. Riley Laing, offshore beachbreak. Photo: Andrew Shield

“The negligible movement of the low — and a cradling high to its southwest — maintained this fetch throughout the Wednesday and Thursday, before it finally weakened out above New Zealand’s North Island over the weekend of Saturday 18th. These late-stage developments saw still powerful, but more accessible ESE groundswell, on offer over the weekend, and smaller ESE leftovers were still present in the three foot range on Monday 20th.”

In case you weren’t sure, Deadmans breaks real close to a cliff line. Sam Nolan, trying to squeeze the rail through it all. Photo: Guy Williment

The Superbank eventually got its share. Photo: Matt Dunbar

You gotta claim your mate. Narrabeen’s Matt Dunsmore on a visit to the Man. Photo: Matt Dunbar

The magic light of a winter barrel at Snapper outlines the craggy noggin of its most famed inhabitant. Mick Fanning, outside the rock. Photo: Matt Dunbar

On Saturday the 18th, Cape Solander took a bow. Well several bows. Kipp Caddy getting a kick out of the backwash. Photo: Sam Venn

Deep outer waters plus a series of offshore bombie reefs refract large swells as they approach the South Narrabeen beachbreak, turning it into a sort of smaller scale Puerto. Jordy Lawler, finding a reason to enjoy a year off the QS. Photo: Bluesnapper