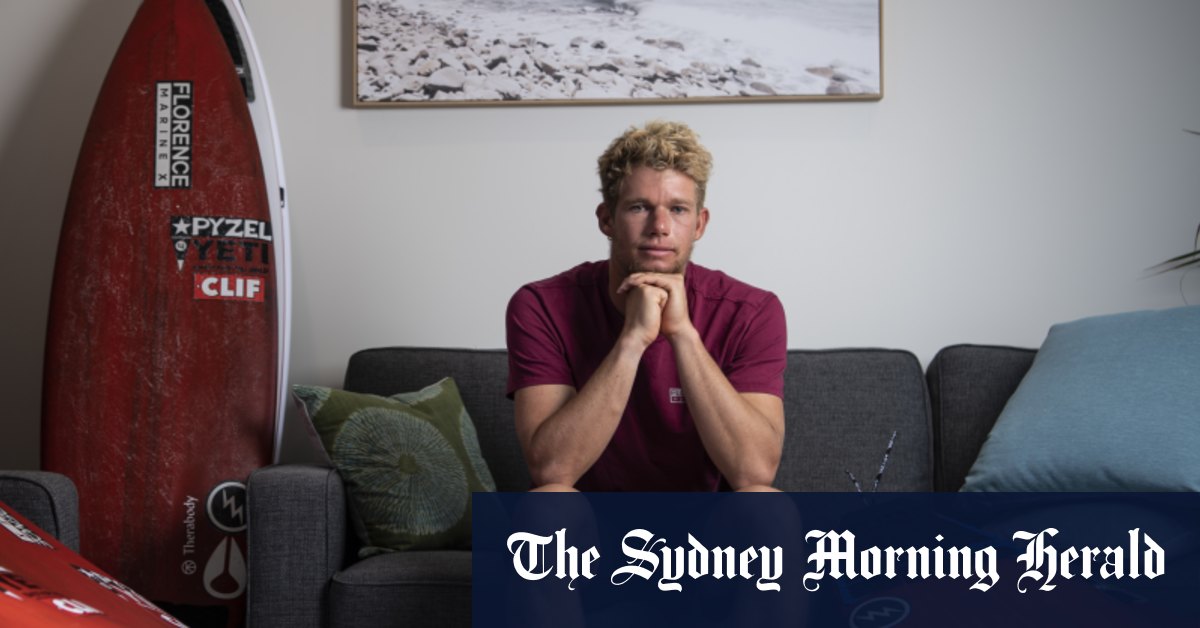 If there are no waves, Florence is one of those people who finds something else on the water. Yesterday it was sailing on Pittwater. Last time in Sydney, before Christmas in 2018, he jumped onto a Sydney-to-Hobart yacht, the 60-footer Winning Appliances. His house is piled with surfboards of course, but also other craft for non-surfing days: longboards, foil boards, experimental surf equipment. All of it is a cure for the bane of the pro surfer’s life, the uncertainty of having to wait day after day for the intensity of a season-defining 30-minute heat.

“Waiting, especially for me, is something I have a lot of trouble with,” Florence says. “If I can’t live the way I live at home, being in the water and doing activities every day, I can get stuck and not feel very good. On off days, I need to stay happy so I have energy on the on days.”

These activities involve “whatever we can ride waves on – foils, longboards, bodysurfing, sailboats, riding waves is what I love to do, it’s what we’re doing at home all the time, figuring out new ways to do it”. During the COVID-19 break, Florence spent time on the open ocean riding his foil board, skimming above the water.

“It’s so smooth and fast and you’re out there by yourself in the middle of the ocean … There’s something amazing about being out there on your own,” Florence says. “I’ve seen whales, turtles, dolphins. It’s so silent and everything’s clear and you’re standing so high up. I haven’t seen a shark yet, but sometimes I’ve thought, ‘I don’t know what that was, I’m just going to keep on going’.” (Florence is, by the way, no stranger to fear: Kelly Slater is the only other top competition surfer who has also won the Eddie Aikau Big Wave Invitational, which Florence achieved in 2016.)

Brazilians, more than sharks or giant waves, are the threat in the water at North Narrabeen. Brazilian surfers dominate the male version of the sport, holding the top two positions and half of the top 25. Last week’s Newcastle event, won by Ferreira, saw five of the top eight places filled by Brazilians.

Florence’s attitude to the Brazilian storm is to try to learn from them. “I’ve grown up in Hawaii where there’s so much energy and power in the water, you don’t need to do much to gain energy. Guys who’ve grown up in small waves, I see them and want to go that fast.”

Not known as a particularly ferocious competitor, Florence is still trying to win, though it often seems a byproduct of a broader quest.

“I spend a lot of time tuning equipment and figuring out boards to match Italo’s speed in small waves,” he says. “I am competitive in that sense.”

Competing is not Florence’s reason to live, but his adaptation to necessity. His popularity and charisma have made him that other servant of his sport, the most marketable commercial entity. Here too he has enough to keep him occupied during those waiting periods, such as a new apparel brand, Florence Marine X, which aims among other things to make sun-protective garments, like hooded rash-guards, something surfers won’t feel embarrassed to wear.

“My skin is not very good in the sun, but if something can help you stay out surfing for five hours without getting cooked, surfing as much as you can all your life without getting skin cancer, that’s got to be cool, right?”

His other ambition with his brand is to make boardshorts that don’t wear out and are easy to mend, so as not to end up as landfill. As Slater has said, you can’t be a surfer without being an environmentalist. And if anyone can make hooded rashies and clothes-mending cool, you suspect it is Florence.

He’s also preparing for the Olympics in Tokyo, very likely in poor waves which, Florence thinks, will make the argument for staging Olympic surfing in wave pools. Still, he’s “honoured” to be part of surfing’s debut in the Games, even if he anticipates the event itself to be a “grind”.

His eyes stray to the ocean, which gives nothing back but a picturesque if unpromising flatness. The guy just wants to surf, and with Friday’s heats at Narrabeen called off due to a lack of waves, Florence has to wait.

“It’s really hard to explain, because I go into competition with a freesurfing mindset and like to let go,” he says. “Bringing that to competing is a challenge because there are so many things going against freedom: 30-minute heats, being judged, priority rules and so on. When I feel freedom I’m at home.”

The enemy is not so much his competitors as competition itself. “It’s definitely hard at times, because sometimes I just want to go out and surf dreamy good waves with no one else around. Sometimes it’s difficult to be on the constant regimented grind. You can get sucked into this dark wormhole of overdoing things, where you’re obsessed by trying to do as much as the next guy. You can easily create bad habits in overdoing things.”

For Florence, less is often more. “Simplifying it is what works for me. That feeling of surfing first thing in the morning, getting some fun waves and getting out of the water, that feeling everyone gets – I love that.”

Sometimes the feeling results in winning heats, sometimes it doesn’t. The balance is more important than the winning. For his admirers, who think a surfer as talented as Florence should win every heat, his mindset can be frustratingly easy-going compared to the unrelenting competitiveness of his chief rivals.

But it’s also what makes him a symbol of something higher than mere winning. “Surfing is attitude dancing”, as Hawaii’s Gerry Lopez put it.

Among the elite competitors, someone has to keep that attitude dancing along.

Malcolm Knox is a journalist, author and columnist for The Sydney Morning Herald.