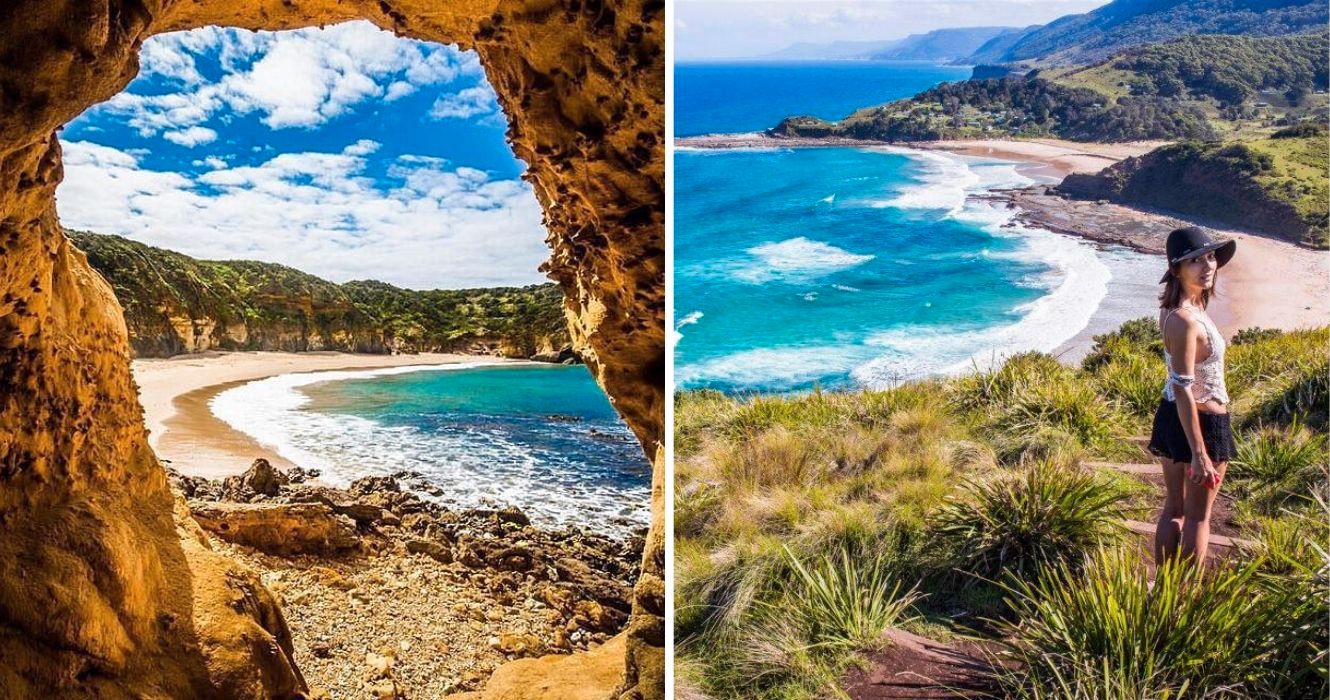 There’s no end to Australia’s natural beauty and while most people flock to Bondi, many don’t realize there are other (stunning) options.

Without a doubt, visiting Australia’s breathtaking beaches are almost always included in a typical tourist itinerary along with snorkeling in the Great Barrier Reef. Usually, these beaches include popular Sydney beaches like Bronte and, of course, Bondi Beach. But the truth is, some of the best beaches the country has to offer are so far off the beaten path that they’re basically a secret.

Tourists usually way the pros and cons of traveling to either the east coast of Australia or the country’s west coast as most can’t afford to fly to both. But we’ve found lesser-known beaches that dwell on both major coasts, as well as in the interior, on the island of Tasmania, and in the south and north of the country.

Without further ado, here are stunning secret beaches in Australia that are way better than Bondi.

Generally, tourists know exactly what to expect when they visit gorgeous New South Wales beaches like those found in Jervis Bay and Byron Bay. But few tourists know anything about Dreamtime Beach, which is located in the town of Fingal just south of Tweed Heads. If you follow the walking track that leads through the Fingal Headland Reserve from the end of the Lighthouse Parade or walk north from the Surf Lifesaving Club at Kingscliff, you’ll find a beach with fine white sand and lush green foliage. Honestly, it’s pretty close to paradise. According to dreamtimebeach.com, it was formed twenty million years ago when Mount Warning erupted, which is why the beach has dramatic black cliffs with unique rock formations as its backdrop.

Escaping the summer crowds is one of the best aspects of enjoying one of Australia’s many secret beaches such as Garie Beach in the state of New South Wales. The beach is located in a remote coastal valley in the Royal National Park about 40KM south of the city of Sydney. The name “Garie” beach is from an Aboriginal word for sleepy, and the beach itself definitely gives off those vibes in the best possible way. Hard-core walkers will love this beach as will campers who are cool with renting a beach shack with no electricity, fridge, or shower. But, hey, we’ll go for all those hot Auzzie surfers.

8 The Remote Langford Island In Queensland Is Sent From Heaven

Langford Island in the state of Queensland is one of the many secret beaches in Australia that no one told you about. You’ll need a boat of some sort to access this remote paradise that’s complete with a sprinkling of heaven-sent white sand. It’s found in the northwestern corner of the Whitsunday Islands National Park nearby Haymen Island. It’s a tiny place, but awesome for hiking, walking through ankle-deep waters and swimming in reefs filled with tropical fish. Also, there are practically no crowds for obvious reasons.

The tannin-stained lake in the middle of a mountain pass is where you’ll find this little gem of a beach. It sounds absurd to find a stellar beach in the middle of nowhere, but that’s precisely what Lake Rhona is… an absurd little dream. The beach at Lake Rhona is a reward for a grueling two-day, 28km trek through Franklin-Gordon Wild Rivers National Park on the island of Tasmania, Australia’s most southern state. For campers, Lake Rhona is a highlight of their trip, according to TripAdvisor.

The state of Victoria, home to the city of Melbourne, is also where you’ll find the treacherous Shipwreck Coast. But the name shouldn’t deter you. While the coastline has been tough on ships throughout history, it’s been fantastic for beachgoers. This is because some of the beaches are protected from the turbulent waters, such as Childer’s Cove. Limestone stacks and other rock formations protect this 100 meter stretch of glorious beach located just each of Warrnambool. Because this beach isn’t prominently marked, it’s virtually unvisited in comparison to some of the most popular beaches in the area, according to australiantraveler.

Dirk Hartog Island is off the mid-west coast of the state of Western Australia and is part of the Shark Bay World Heritage Area. According to escape.com, the area is a scenic outpost that boasts truly gorgeous desert sand dunes, rugged ocean cliffs, blowholes, a pink lake, and a bunch fo deserted beaches like the ones found on Dirk Hartog Island. The island is accessed via a short barge ride from the mainland. You can simply visit the island for the day, camp there, or stay with the 4WD tour experience.

Kangaroo Island is a popular destination for those visiting the city of Adelaide and the rest of the state of South Australia. It takes about 4 hours to get there from Adelaide via car and ferry but it’s more than worth it, according to escape.com.au. While there are a few stunning beaches on Kangaroo Island, Stokes Bay has got to be the best. It overlooks Investigator Strait and can only be accessed by squeezing through giant boulders that guard the entrance. Once you reach it, you’ll have tons of white sand to play on, blue waters to swim in, and rock pools to investigate.

Related: 20 Isolated Australian Beaches Even Locals Won’t Tell You About

There are no seashells or squawking seagulls in Ormiston Gorge, but it’s almost definitely one of the best lesser-known beaches in Australia. According to escape.com.au, Ormiston Gorge is a wonderful place for a dip thanks to warm waters and stunning tapestry of fiery ochre cliffs and white ghost gum trees that surround it. The gorge is ideal for swimming and gets to be 14 meters deep at its southern end so you can even jump off the cliffs. It can be found 135 kilometers west of Alice Springs in the West MacDonnell National Park in Australia’s Northern Territory. It’s accessible via sealed roads and is the Trailhead for sections 9 and 10 of the 231-kilometer Larapinta Trail walk.

Related: 15 Of The Most Stunning Photos Of Beaches (Taken By Regular Tourists)

While Ocean Beach is unpatrolled and not safe for swimming due to the powerful swells and rips, it’s a wonderful place to sit on the sand or explore. According to TripAdvisor, the beach can be found north of Macquarie Heads and Hells Gates and 6km west of Strahan on Tasmanian’s wild and rainy west coast. It’s a whopping 40km stretch of beach and thus Tasmania’s longest. It’s a phenomenal place for horse riding or sandboarding on the massive sand dunes.

Related: 15 Photos That Show How Different Backpacking Through Australia Was Just 30 Years Ago

25km from Melbourne near the town of Sale is the totally epic 90 Mile Beach which is named that because… well… for obvious reasons. The beach is known for its golden sands and rolling surfs that stretch the length of Gippsland from Port Albert to Lakes Entrance. Tourists flock to the various smaller beaches along 90 Mile Beach, but the best lesser-known destination there is Golden Beach. According to Escape.com.au, the beach is great for ocean fishing, surfing, and wildlife spotting. You’ll see kangaroos, emus, and echidnas wandering the beach. But also you’ll have access to some truly beautiful waters to swim in.

Next: Liam Hemsworth, Shawn Mendes, And 14 Other Celebs Who Love Byron Bay, Australia


Next
Yes, You Can Travel Poland On A Budget, But Here’s What You’ll Want To Prioritize

Dylan Parker is a list and content writer working for Valnet Inc. He’s written for The Things, The Talko, Baby Gaga, Moms, and Screen Rant. He specializes in entertainment, film, and celebrity news. Dylan has also written for Narcity and various other entertainment, food, and travel publications.

What the Yellen choice means for Biden and the economy