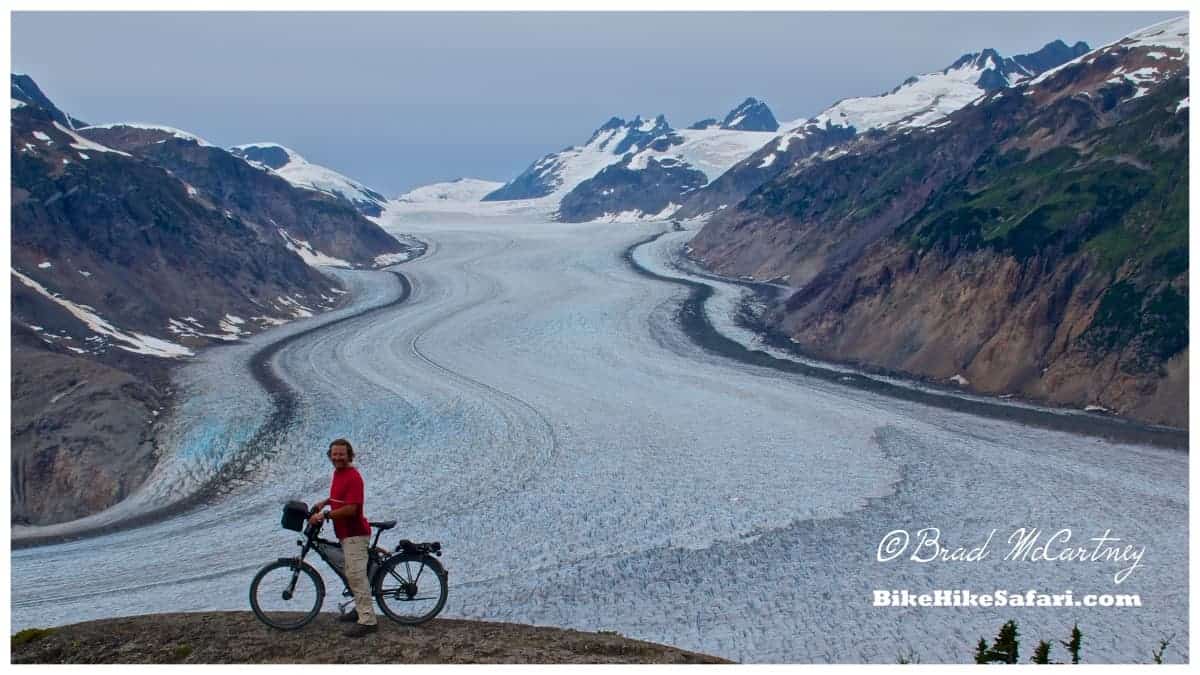 Spirit Bears (or Kemode Bears) are those rarest of Black Bears that live in the coastal rainforests of Alaska and British Columbia, Canada. A common place to see them is said to be around the twin Towns of Stewart and Hyder on the Canada / Alaska border. The place also has the impressive Salmon Glacier and the Fish Creek which not only sees migrating Salmon but they in turn attract Bears and Wolves to feed on them.

After the big push to make it here I spent a day or two, just eating, drinking, sleeping then repeating. Didn’t take long and I was ready to get out and experience the place.

The Spirit Bears are stuff of traditional legend. It is said that 10% of all black bears in the rainforest region are white. They are not albino, they are just cream or blonde in colour, similar to humans having red or blonde hair, it’s all in the genes. It is also said it gives them a greater advantage in fishing.

And so it was that I made my way to Fish Creek a couple of kilometers from Hyder to view the spawning Salmon and hope to glimpse a Bear or three. Not only bears but Wolves are attracted to the area.

Several hours and several visits resulted in one Black Bear sighting. No Spirit Bears or Wolves. I mustn’t have enough Karma points in the bank! Others I spoke with were much luckier than I, seeing Wolves, Grizzly Bears and Black Bears. Nobody I spoke with saw the spirit bear.

Salmon Glacier is about 37km from my campsite in Stewart. I made a day trip from to see it. There has been horrible weather of late but I was presented with half a day of good weather according to the locals, so off I sped. This is apparently the largest Glacier in North America that can be accessed by road. So worth the trip for me.

Heavy fog rolled in from the sea as I set off but it soon passed as I climbed over 1100 meters in about two hours of cycling. Its so much easier to cycle without the weight of all my gear, which means my bike is about 25kg lighter!

Within a couple of kilometers from the top a car on the way down slowed and waved at me. Nothing unusual, that happens very regularly. It was John from Oregon. He gave me a lift through the Whittier tunnel back in early May. Small world. We organised to meet up again later, after I’d viewed the glacier.

Luckily for me the bad weather of late held off long enough for me to see the glacier, something others had missed out on when they went days before me. Great little side trip on my journey from the Arctic to the Rainforest and beyond.