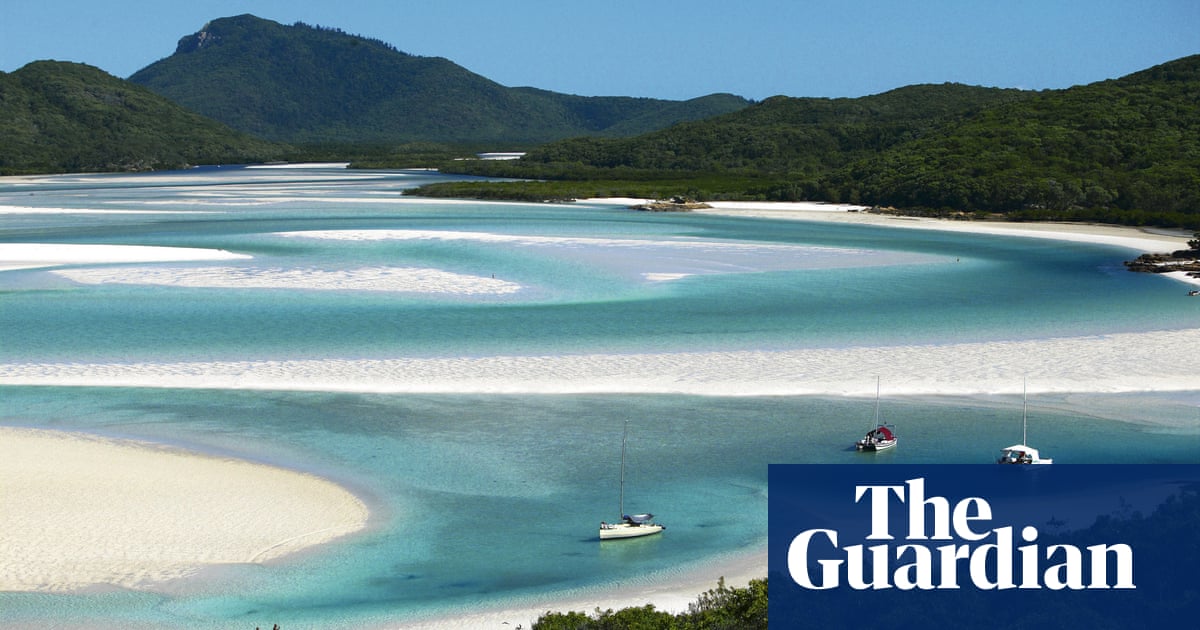 Waking up on a Saturday morning with no phone reception would usually be cause for alarm or a strident march to the Apple store. Today, however, as I rise with the sun on a catamaran anchored in the Coral Sea in the remote Whitsunday islands, off the Queensland coast, our skipper, Cuzzy, has engineered other distractions.

The unflappable Kiwi with a castaway’s beard ushers our small group aboard a motorised dinghy and whizzes us ashore to the uninhabited Whitsunday Island. Landing on an empty beach, we hike 500 metres up through forest filled with stately hoop pines to Tongue Point, where we’re greeted with the “hero” vista of the Whitsundays – the swirling sands of Hill Inlet. The lookout receives an average of 350 visitors a day, but Cuzzy wants us to experience it without crowds – just the ospreys and Lewin’s honeyeaters for company – and to witness the spectacular natural phenomenon of white sand swirling through turquoise water as the tide goes out. It’s well worth the early start.

My group is in the Whitsundays to experience bareboating, which isn’t quite the lewd pastime its name suggests. While the islands’ isolated bays and year-round balmy weather would indeed delight nudists, bareboating is not so much about getting the wind on your birthday suit as it is chartering a vessel with your friends and sailing wherever the wind (and engine) takes you. A boat license isn’t necessary, but some sailing experience is. However, with the ocean here sheltered by the Great Barrier Reef, and over 150 protected anchorages to call it a night, the Whitsundays is as close as you get to smooth sailing, making it an ideal place for a rookie to clock up some knots.

We’re fortunate enough to be undertaking our bareboating experience aboard a brand new eco-accredited $1.3m catamaran named Nordic Dream. It’s the kind of boat you imagine supermodels swanning about on in billowing sundresses, glasses of bubbly frothing over as they sprawl mid-laugh on the front-deck lounge.

Because we are opting for the laziest holiday possible (and let’s face it, none of us knows a starboard from a stern), our group has hired Cuzzy, an experienced skipper who comes with the boat for an extra $250 a day. He knows all the secret snorkelling and anchoring spots away from the backpacker party boats. He coaches us on raising the sail, steering the catamaran through narrow passages and the physics of putting down an anchor. At night he explains how to listen through the hull for the sound of dugongs swimming around the boat and for whales singing . He points out the constellations in the clear night sky. He even divulges the best location to propose (“It’s a tidal island of sand that appears for only 20 minutes once every six months.”)

Due to very patchy phone reception out by the islands, this long weekend is essentially a digital detox. And with the Whitsundays being right in the heart of the Great Barrier Reef (and in the section that hasn’t been decimated by coral bleaching), our bareboating sojourn will be both an above-board and underwater adventure.

After our early morning start and breakfast back on the boat, Cuzzy sails us to Whitehaven beach, a 7km stretch of dazzling-white sand lapped by aquamarine sea. It is just around the corner from Hill Inlet and consistently tops lists of Australia’s best beaches. He leaves us there to spend a good couple of hours swimming, sunbathing, playing beach cricket, standup paddle-boarding, strolling, and photographing the near-deserted expanse of island paradise from every conceivable angle. Whitehaven is backed by thick forest, which took a nasty battering during Cyclone Debbie in March, but it doesn’t detract from the beach’s perfection.

Water is the only way of reaching Whitehaven beach, the picture-postcard jewel of Whitsunday Island, which at 275 sq km is the largest in the group of 74 lush, wild, mountainous islands that make up the Whitsundays. In the past 6,000 years – since the end of the last ice age saw this section of Australia’s Great Dividing Range submerged by a 100-metre sea level rise, effectively creating these islands – boat has been the preferred way to get around.

The Ngaro people, whose presence in the area can be traced back almost 9,000 years, adapted to the radically changing landscape by constructing canoes to paddle between the mainland and the islands, where they hunted dugong, turtles and the abundant sea life.

After our chilled-out morning on Whitehaven beach, our group returns to Nordic Dream to slip into our finest snorkelling attire. For me, that includes a black stinger suit with gloves, a bank robber’s hood and flippers to protect me from irukandji (poisonous jellyfish), which are most active during the humid summer months, but I’m too chicken to take any chances. Jumping in the dinghy, Cuzzy takes us out to a calm cove and little-known snorkelling spot where he gives us galeophobes a few tips. It is extremely rare to encounter the shy and well-fed reef and tiger sharks that lurk in the Great Barrier Reef, he says, but “they can detect our heartbeat and think we’re massive fish”.

“It’s the splashing about that attracts them. So while you’re snorkelling, don’t thrash about on the surface making noise or doing a wounded fish impersonation. If you see one, keep calm and carry on. It’s a philosophy that works for everything.”

Sliding calmly, flippers-first, into the water, a new world materialises through my snorkelling mask. As I swim along the edge of a coral-covered rock shelf, I spy colourful moon wrasse (the aquatic equivalent of an exotic parrot) and black-and-white-striped banded humbug (the zebra of the underwater community). A fluoro yellow damselfish dives for cover as I hover over it, but then decides I’m no threat and emerges fearlessly with a classroom-sized school of friends.

As well as harbouring 1,500 species of fish, the Great Barrier Reef is home to a third of the world’s soft corals, and I spend an inordinate amount of time mesmerised by what looks like a gigantic animated lamington. The fish seem particularly attracted to twin coral sculptures in shades of violet and green tea, replete with the kind of flamboyant frills that suggest a bygone encounter with an amorous pirate.

That afternoon we sail past the swanky resorts on Hamilton Island en route to the western side of Whitsunday Island. We anchor in Cid Harbour in time to watch the sun set behind silhouetted mountains.

These same tranquil waters are where the allied navy ships anchored during the second world war before the battle of the Coral Sea. Sitting here, you can imagine Queensland as it was thousands of years ago, or at least as it appeared to Captain James Cook, who sailed through on the Endeavour in June 1770 on the festival of Whit Sunday (although unbeknown to him it was actually Monday – the international date line wasn’t a thing back then).

We decide to have Saturday night dinner and card games on our sister ship, the Hakuna Matata, where the rest of our party are sinking beers and doing a spot of fishing. That boat’s skipper, Jimmy, chats away as he turns the steaks on the barbecue. He waxes about his favourite week of the year – Airlie Beach Race Week (falling 10-17 August in 2017) – the highlight of which he says is the Great Whitsunday Fun Race, a fancy-dress sailing contest complete with a Miss Figurehead competition. Every boat must have a real topless woman at its bow, Jimmy explains. “It’s all fun and games till yer mum’s up there,” he says with a knowing laugh.

On Sunday morning we sleep in, awakening to a 25C brilliant-sunshine June day and a serene stillness that is only broken by the sound of bacon sizzling on the barbecue and the hypnotic rhythm of the ocean licking at the hull. A few metres from the boat a green turtle surfaces, craning its long neck towards us as it takes four big gasps before diving back under.

Everyone in our group chooses to spend their final morning differently – one of us takes off in a kayak to explore the nearby coves; another dives off the boat and swims over to Hakuna Matata; a book lover curls up in the sun with her latest read.

I opt to go ashore to stroll through coastal rainforest. Cuzzy takes me in the dinghy to Sawmill beach and I walk alone along a 1.5km bush track dotted with pines and white cheesewood trees. Birds and butterflies flit between palms and tangled vines through which I glimpse Nordic Dream bobbing in the sea.

Half an hour later I arrive at Dugong beach, where a few national park campsites are concealed by trees, before Cuzzy picks me up in the dinghy, zigzagging through the shallow waters where dugongs and turtles come to feast on seagrass.

On our way back to the ship, I wonder out loud how I could relocate my entire life out here. Cuzzy smiles, running through the benefits of “living in a bubble” on the ocean.

“You have no idea what’s happening in the outside world for weeks at a time,” he says. “I try and have as little phone reception as I can because you feel a lot less present when you’ve got that distraction. There’s no Trump out here. When you go back, it can be a shock. You get three weeks of news in a day, and you’re like ‘What’s happening to the world? It’s crazy!’

Later that morning, sailing back to Airlie Beach and the world of 4G and Trump and normal-sized lamingtons and a wintery Sydney, I sit in my billowy sundress in the catamaran’s supermodel lounge, the warm wind in my hair, a succession of magnificent islands parading past. For now at least, I’m in my happy place.

• Guardian Australia travelled to Whitsundays courtesy of Tourism & Events Queensland and Go Bareboating. Chartering a boat costs from $$780 a night for a sailing yacht that sleeps up to five people and goes up to $2,400 a night for a Nautitech Open 46 catamaran that sleeps up to 12 people.
• If you’ve got the arms, Salty Dog Sea Kayaking run multi-day kayaking trips in the Whitsundays.
• There are 11 locations to camp in the Whitsundays national park; cost is $6.15 per person per night.
• Hamilton Island has a number of hotels and resorts and is serviced by its own airport.

Falling from the sky: the providence petrels of Lord Howe Island – video | Environment