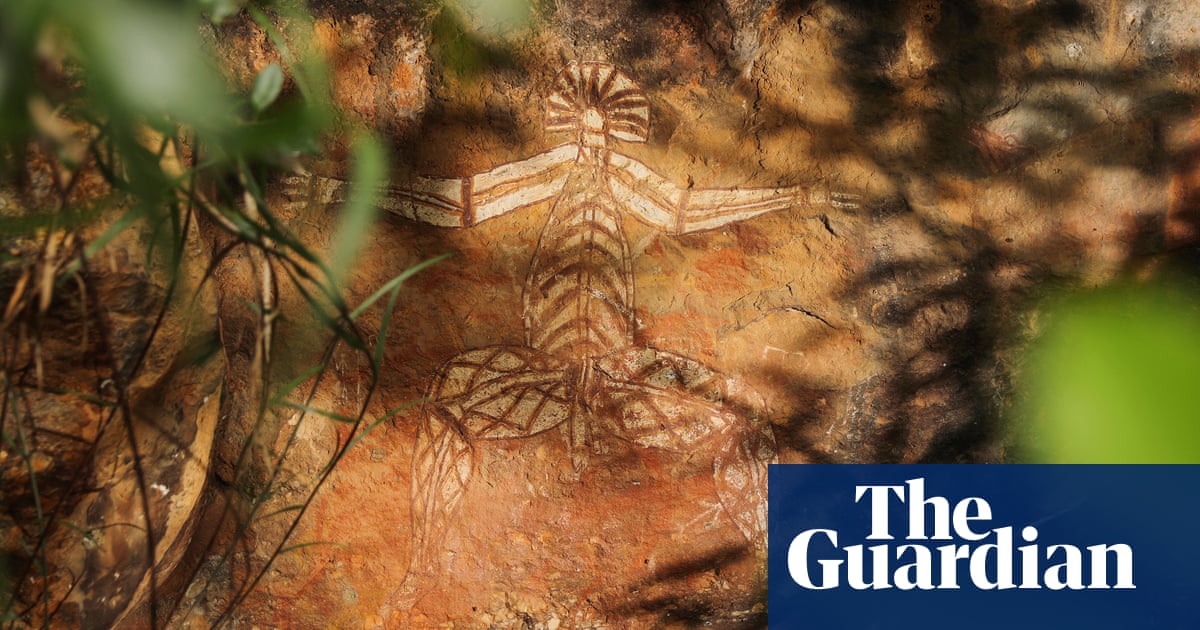 Following the Northern Territory art trail offers those who love art the chance to get out of white cube galleries and into lovely, wild parts of the country. Visit the tiny Central Australian community of Papunya to see where contemporary dot painting began or make your way to north-east Arnhem Land for memorial poles and award-winning digital film-making. The territory is the best place to learn about artistic practices that, while always changing, extend back tens of thousands of years.

The Museum and Art Gallery of the Northern Territory, Darwin

The distinction between religious objects and works of art is often arbitrary, as evident in the beautiful Aboriginal pieces exhibited in the Museum and Art Gallery of the Northern Territory. Take the warnamaleda, which was traditionally made to contain the bones of a deceased child, and remained with the mother until she gave birth to another. The museum displays a warnamaleda made by an unknown artist from Groote Eylandt, meticulously painted with an east wind design and decorated with feathers and string.

Darwin is founded on the lands of the Larrakia people and you can learn more about their culture, art and rituals at the museum. There are also works from many other nations including morning star poles from Elcho Island, ceremonial baskets, pandanus mats, bark paintings, didgeridoos and contemporary canvas paintings.

One of my favourite pieces is by Carlene West of the Pitjantjatjara people. Her large-scale painting, Tjitjiti (above), is a bold black-and-white abstraction of a large salt lake from her country and the story of two women’s deadly encounter with a quoll man. The second half of the year always features the National Aboriginal and Torres Strait Islander art awards.

The Buku-Larrnggay Mulka Aboriginal Art Centre, deep in north-east Arnhem Land in the community of Yirrkala, is a hive of activity as elder artists sit on the floor hunched over bark canvasses making painstakingly small brush strokes, young men use chainsaws to hack away at tree trunks, carving them into didgeridoos and memorial poles, and school students sit at computers in the digital centre cutting together short films and audio documentaries.

The quality of work at the centre is high and it’s not surprising there is a healthy representation of Buku-Larrnggay Mulka artists showing at the National Aboriginal and Torres Strait art awards each year. Last year Ishmael Marika, one of the rising stars of the centre’s digital arm the Mulka Project, took out the youth award for his evocative short film Sunlight energy II. He juxtaposed footage he shot at the austere, dry Mungo Lake in central New South Wales with the dynamism of his Arnhem Land home.

Kakadu’s impressive collection of rock art – or gunbim as it is called by the Aboriginal traditional owners – illustrates both the earthly and spiritual realms of the region. According to locals, the mystical, long-limbed Mimi spirits were responsible for these older works, and it was from these spirits that their ancestors learned to paint. Many of the ochre works are painted in the “x-ray art” style in which figures are depicted with anatomically accurate skeletal features.

At the Ubirr rock art site in the north-eastern part of the park, you’ll find depictions of native turtle, fish and wallaby species and even a thylacine (Tasmanian tiger), which hasn’t been seen on the Australian mainland for more than 2,000 years. South at the Nourlangie rock art site is a 1964 work by the Badmardi elder Nayombolmi. Don’t miss the ranger-led rock art tours, that are included in the price of the park pass.

• The Ubirr and Nourlangie rock art sites are in Kakadu national park, (08) 8938 1120. A pass is required for entry to the park and can be purchased online

At the Nyinkka Nyunyu Aboriginal Art and Culture Centre in Tennant Creek, a series of box dioramas, also called “bush TVs” or wanjjal payinti in the local Warumungu language, tells the dramatic story of the community’s struggles.

In one bush TV, small, brown-coloured figures are depicted entering a corrugated tin house with a white, wooden cross. This is Phillip Creek mission where children were once separated from their parents, and segregated by gender and racial mixture (“half-castes” or “full-bloods”). The dioramas are rough-hewn yet vibrant and evocative in its portrayal of such harrowing chapters as children being removed from their family and the dispossession of Warumungu land.

The museum’s self-guided audio tour, included in the price of admission, is highly recommended. It takes listeners through the dioramas as well as the excellent display of traditional tools, weapons and ceremonial items. Be sure to listen to stories of the sacred Dreaming site of the Nyinkka (spiky-tailed goanna) and be guided through a garden of bush tucker and medicine.

The small, stylish Ghunmarn Gallery Centre, run by Djilpin Arts, is tucked away in the 500-person community of Wugularr, also known as Beswick. While based on the lands of the Jawoyn people, the art comes from across north, central and west Arnhem Land, and east as far as Numbulwar on the Gulf of Carpentaria. Like all remote community art centres, Ghunmarn does much more than simply sell art – it also houses valuable works of historical and cultural significance (as seen in the permanent Blanasi collection) and offers training and mentoring for new artists.

This is arguably where contemporary Aboriginal art began: Papunya, a tiny pinprick on the map 260km north-west of Alice Springs. In the early 1970s a group of Papunya men including Clifford Possum Tjapaltjarri and Johnny Warangkula Tjupurrula began to paint their sacred stories of ritual and ceremony on to canvas for the first time. This meant showing stories beyond the usual restricted audience of initiated men, so they removed sensitive elements or camouflaged them with carefully placed dots.

These days the artists are just as likely to be women, many of them the wives, daughters and nieces of some of the pioneering male artists. You will see them busy at work at the Papunya Tjupi Arts Centre, as they chat, mix paints and cover canvasses with depictions of country and many, many, minuscule dots. Among the centre’s notable painters is Beyula Puntungka Napanangka, whose large-scale depictions of Kalinykalinypa Tjukurrpa (honey grevillea Dreaming) involve highly detailed, intriguing patterns.

• Papunya Tjupi Arts Centre is in Papunya, (08) 8964 7141. If you would like to visit you must call or email ahead to arrange an appointment. Free admission.

Alice Springs is an art town and visiting its many galleries is one of its greatest pleasures. If you only have time to visit one, make it the Araluen Arts Centre. This NT government gallery is the home of many important works of public art, including the Hermannsburg watercolours and potters, Papunya dot painters and a hall named in honour of the famed Arrarnta landscape artist Albert Namatjira. Don’t miss the brightly coloured, fibre sculptures of the Tjanpi Desert Weavers including Marlene Rubuntja’s depictions of women’s life in the desert through her eccentric wool sculptures, embroidered in a profusion of colours.

One of the best times to go is during September’s Desert Mob weekend, a festival that draws together work from Aboriginal art centres in the territory, South Australia and Western Australia and offers a rare opportunity to rub shoulders with many notable Aboriginal Australian artists based in remote regions.

• The Araluen Arts Centre is part of the Araluen cultural precinct at 61 Larapinta Drive, Alice Springs, (08) 8951 1122. Admission fees are $10 to $15, children under five may enter for free. This covers all Araluen Art Centre galleries, the Museum of Central Australia and the Central Australian Aviation Museum

The Arrarnta man Albert Namatjira is considered one of the Australian art greats, remembered for his poignant watercolours of the central desert. His life was marked by national recognition of his talent but heartache too, his art-world celebrity status working to highlight the discriminatory laws against Aboriginal people of the time. The final, heartbreaking chapters of his life proved that having a foot in both black and white worlds is rarely easy.

What remains are not only his paintings – the graceful MacDonnell Ranges in muted blues or loving portraits of stately, pale white ghost gums – but a dynasty of artists that are considered part of the Hermannsburg school of painting. Iltja Ntjarra, or Many Hands Art Centre, in Alice Springs represents these artists, most of whom are related to Namatjira. Among the more established artists showcased is Mervyn Rubuntja, whose graphic style and bold use of colour demonstrate the ongoing evolution of the Hermannsburg school.

Their terracotta pots featuring Aboriginal country musicians, footy players, landscapes and perhaps the most common theme – native flora and fauna – are bold and beautiful. The small and busy studio, decorated with a colourful tile mosaic, is an important community and cultural centre and welcomes visitors by appointment only. Their work is also available for purchase at the nearby Hermannsburg historic precinct.

Significant historical moments have made their way into the art. In a National Gallery of Victoria show, a pot depicted footballer Nicky Winmar lifting his shirt and pointing at his bare skin, a powerful statement of black pride after he was racially abused at a 1993 AFL game.

After a sell-out 2016 season, the acclaimed art installation Field of Light Uluru has been extended until 31 March 2018. Thousands of people have now watched the moon rise over the monolithic rock amid the glow of 50,000 installed coloured lights.

The solar-powered bulbs with slender stems slowly and constantly change in colour, much like the big rock itself during sunrise and sunset. The local Anangu traditional owners of the land have named the artwork Tili Wiru Tjuta Nyakutjaku in Pitjantjatjara, or “looking at lots of beautiful lights”.

Bruce Munro, the British light artist responsible for the piece, lived in Australia during his 20s and 30s. At the end of his time here he did a road trip to the red centre in an old Toyota. As he told Guardian Australia: “My Sydney friends kept on saying, ‘Go to Uluru,’ but of course none of them had actually been.

“When I got here, it changed my life. I jotted this idea down in my sketchbook and didn’t think it would see the light of day.”

A quarter of a century later, that sketch became the Field of Light. There are several options to view the work – at night, sunrise, during a lavish dinner, by helicopter, and even by camel ride.

48 hours on the Great Ocean Road: for those who like water – and chocolate | Travel