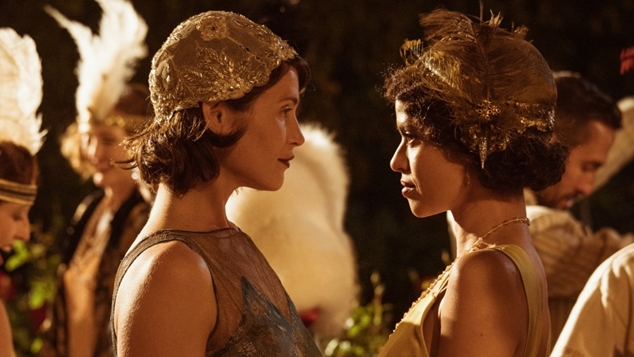 British filmmakers absolutely excel at recreating historical times and never seem to run out of wartime stories. This is the first feature film for British playwright Jessica Swale who takes us to a small village in Kent where young children are being evacuated to escape the bombing in London.

Alice Lamb (Gemma Arterton) is a reclusive writer who analyses folklore and has been targeted by locals who see her as a witch. Her only companion seems to be memories of her lost love Vera (Gugu Mbatha-Raw) who left in 1926 because she wanted to have a family.

The last thing Alice needs is a young boy turning up on her doorstep and having to be cared for, even though Frank (Lucas Bond) is a delightfully patient young boy whose father is a fighter pilot and mother works for the Department of Defense.

So, forced to do her bit for the war effort, another side of Alice emerges before the narrative becomes melodramatic. A series of events, probably predictable in hindsight, collide to disturb the idyllic country life of the rescued boy and the rescued spinster. Unfortunately I found the ending quite awkward and the film badly cast, but at least having an interracial lesbian affair and a happy ending is a pleasant surprise for a wartime drama.

Summerland is part of the British Film Festival which screens from Tuesday 10 November to Sunday 29 November. As well as some retrospective films (including The Elephant Man, Flash Gordon and The Ladykillers), there are 18 premieres of good old British dramas.

The Opening Night events are at Luna Leederville, Luna on SX, Palace Raine Square and Windsor Cinema. The opening night film is the Australian premiere of Blithe Spirit, starring Dame Judy Dench. Based on gay playwright Noël Coward’s classic comedy, a medium holds a séance for a writer suffering from writer’s block but accidentally summons the spirit of his deceased first wife.

Help support the publication of OUTinPerth by contributing to our
GoFundMe campaign.