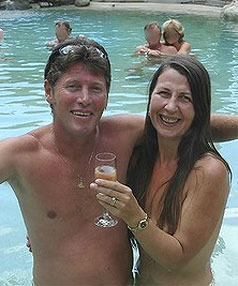 BAD NUDES: Australian nudists say swinger resorts such as Tony and Lenore Fox’s White Cockatoo are bad for their image.

The White Cockatoo resort at Mossman in north Queensland hit the headlines last week with reports of poolside sex and partner swapping, and that was from its owners Tony and Lenore Fox.

The timely free exposure hasn’t hurt their advertising campaign aimed at selling the resort for $1.5 million, with a flood of prospective national and international callers.

But more sedate nudists say the reports give the wrong impression about the nudist movement and will harm Queensland’s bid for its first legal “clothing optional” beach.

President of Free Beaches Australia, Traven Searle, said nudism was for families and couples who simply wanted to take their clothes off in a healthy environment.

“Nudism for us is a lifestyle thing where we can socialise without any sexual connotations,” he said. “The whole thing up there (at The White Cockatoo) is very negative because it promotes a very sexual image.”

He said his group and the Australian Nudist Federation (ANF) hoped the resort would become a non-nudist resort when sold as it was giving nudism a bad name.

“We are against adult only and swingers’ resorts and prefer family-friendly places where kids can go for fun,” he said.

“All the negative publicity will be brought up whenever we suggest a clothing optional beach and definitely won’t help.”

ANF president Werner Jacobs said his group, with 3000 members, was considering changing the group’s name to ‘naturist’ instead of ‘nudist’ because of the bad publicity.

“It does tarnish our image but I think the owners are just cashing in on the publicity while we do it for the lifestyle,” he said.

Mr Fox said the resort was not “no holes barred” all year. Three seasons catered for conventional (fully-clothed) families, more “conventional” nudists and adults only.

“The prudie nudie season is mainly for the 40 to 60 year olds, your older club type,” he said. “They’re the hang-over from the 60s with a ‘no sex please, we’re nudists’ attitude.”

He said the fastest growing season was from January to March, the adults only/partner swapping time mainly for 25 to 45 year olds.

“The AO season is three times as popular as the prudie nudie with a much more liberated environment. Sex does happen in the pool or other public places between partners or with others,” he said.

“We have close neighbours but we have very high fences. There’s plenty of shade so sunburn isn’t a problem.”

James Bishop, owner of the Pacific Sun Friends resort at Donnybrook, north of Brisbane, said “all that swinging and wife swapping” was immoral.

“We have a high moral standard here and don’t accept sex in public,” he said. “Politicians and people that hear about what’s happening up there will use it against the nude beach issue.”

Mr Taylor agreed the publicity was doing more harm than good to the nudism industry.

“Saying people have sex in the pool certainly doesn’t help our image,” he said. “Our resort doesn’t allow singles or kids and we don’t have swingers under any circumstances. There is absolutely no sex in public here.”

He said the only difference between his resort and others was that people wore fewer clothes.

“They fit my definition of prudie nudie to a tee,’” he said. “They are out of touch with what happens in the real world and are jealous that people just want to have a naked holiday instead of joining their clubs.”