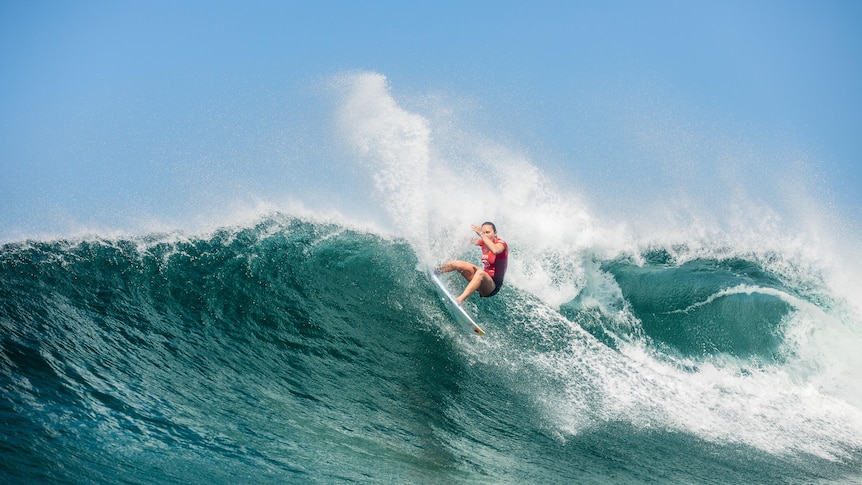 Moore put on a dominant performance in the final, scoring a nine-point-five and a six, to defeat Australian tour rookie Isabella Nichols, who struggled to find a decent wave.

Nichols had eliminated seven-time world champion Stephanie Gilmore earlier in the competition and said she was happy with her performance in what was her very first year on tour.

“I’m really proud, honestly, I didn’t expect to get this far and for me to have a heat against not only Steph and then Carissa, two of my childhood idols, it’s so surreal, this is the best job ever,” she said.

“I felt like I didn’t get decent opportunities … but only so many things can go your way and Carissa outsmarted me and it was really cool to see how she went about her heat.”

Medina delighted crowds with a huge air to score a nine-point-seven, which Cibilic could not match with a pair of seven-point rides.

“That air he did was insane, so I’m not complaining, I’m pretty happy with how I did in the event,” Cibilic said.

“There are so many people down here on the beach, it’s mental, I’m loving it.”

In the end, it was the reigning world champ Italo Ferreira of Brazil who claimed the ultimate prize, with two seven-point airs to defeat Medina in the final.

The World Surf League tour will now head to Sydney’s Narrabeen Beach in six days where the high-flying Brazilian men will again be difficult to beat, and the Australian women will be looking to strike back.

Moore too good for Aussie in WSL final | The Maitland Mercury