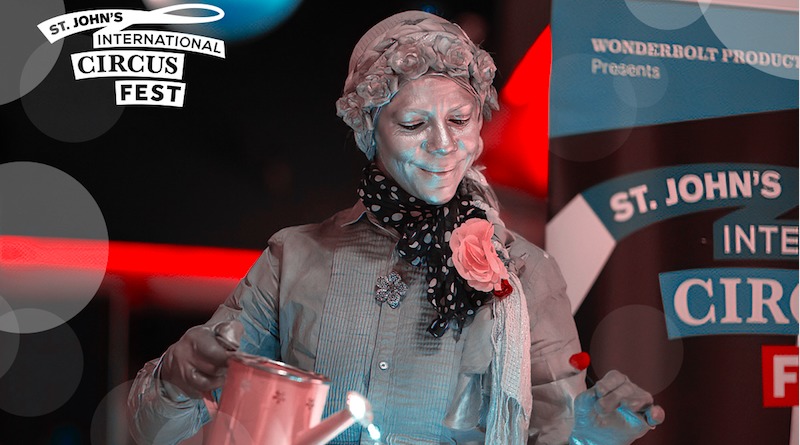 In its third year, the  St. John’s International CircusFest was quickly gaining a reputation as the new bijoux (little jewel) for contemporary circus performances, as well as providing an engaging professional industry marketplace against a uniquely rugged landscape. Circus artists from around the world gathered in what was once known as the City of Legends, St. John’s Newfoundland & Labrador. Touted as the oldest city in North America and located on a remote island in the far east of Atlantic Canada, St. John’s has an incredibly strong sense of place and an intense passion for the arts – and it seems it’s always been that way.

The St. John’s International CircusFest (SJICF) was the brain-child of its Artistic Director, Anahareo Dölle, a veteran aerialist and graduate of Ecole nationale de cirque of Montréal where she specialized in aerial hoop and silks and also the owner/operator ofiFLY Aerial Arts, an aerial school that strives to create a fun and safe environment with hands-on instruction.  Along with her father, Beni Malone, who has trained withRingling Bros. and Barnum & Bailey’s Clown College in Venice, Florida and École Nationale du Cirque (currently L’Académie Fratellini) in France, they created the first SJICF in 2018. Beni’s professional circus company,Wonderbolt Productions, has been providing unique, original theatrical presentations to audiences in Newfoundland and Labrador and across Canada for more than thirty-five years.

Because of the ongoing worldwide pandemic, Wonderbolt and the SJICF were committed to social distancing and staying safe earlier than other similar-sized arts organizations, comparatively speaking. Almost immediately, the team realized this meant not only having to find new ways to bring the festival to life and gather remotely but also quickly restructure the company’s workflow and communications protocols, all at the same time. With provincial government lockdown orders looming, staff quickly took to working remotely from home and elsewhere, while upgrading their digital infrastructure with secure cloud file storage and video conferencing software. The company was, coincidentally, already undertaking a digital literacy upgrade, led by our Digital Projects Manager, Ian Campbell, and so we were ready to begin implementing our new skills.

It was important to all the staff that we continue planning the third annual SJICF, even though it was still quite unclear what kind of international travel would be permissible, let alone large public gatherings and stage performances. Anahareo especially kept her fingers-crossed to bring her friends and colleagues to her hometown for a third time. After all, three times lucky, right?!

“I kept saying and thinking to myself,” remembers Dölle, “Yeah, but this will be plan C or D, or even Z!”

It was clear that if by some miracle travel restrictions began to relax, we would revert back to our original vision of in-person events and live performances. But we had to keep moving forward with the notion that it most likely would not.

Anahareo, Beni and the Wonderbolt staff constantly struggled with the idea of the festival being exclusively online. So we connected with Jesko von den Steinen,a friend and colleague of Anahareo, as well as an international consultant to some of the biggest corporations and performing arts companies in the world. We were lucky to have such a leading thinker on how to gather digitally and provide unique memorable experiences for our participants. Or at least try!

Jesko talked about connectivity and story, and tactile vs. digital and things we never even considered, but we quickly realized they were all very important if we wanted to realize our new vision for the festival.

Connecting with Jesko, who resides in Macao China, meant considering how different our time zones were, so finding suitable times to meet on Zoom was… interesting. If it was suitable for staff in Newfoundland, it was the middle of the night for Jesko. But he was very gracious and mentored the team through the new digital frontier. His suggestions opened up a broad new vision for the festival, which included telling our story and having tactile resources for participants to use during the virtual workshops and panels. So staff compiled and mailed those who signed-up early a traditional Newfoundland “Care Package” but with a circus spin! Including local keepsakes and other souvenirs, the care package also included puzzles and other activities to be completed before, during and after the panel or workshop. This was our way to keep the human connection present and the magic of circus in the forefront.

Jesko also suggested using an online collaboration platform, called MURAL, a virtual canvas that users can contribute to and interact with in real-time. This became the centre focus point for the festival outlining all events and times, as well as synchronous and asynchronous activities for participants to complete. People were able to leave personal messages and photos, as well as comments and questions, while interacting with colleagues and friends from across the globe.

From there, Anahareo also worked closely with Carole Demers, who was located in Berlin, Germany.  Using their extensive industry network, both Carole and Anahareo reached out to circus artists and companies from almost every corner of the world, and almost immediately began to receive positive feedback and replies, asking to be a part of the festival somehow! They curated hours of video performances, together with Hands-on Workshops and Keynote Speakers including Olympic gold Medalist Sylvie Fréchette and Performing Arts Consultant and Creative Producer, Matthew Jessner.

We also connected with Tanya Gadsby fromFuseLightin Vancouver, British Columbia, who became our Visual Scribe during the festival. As more artistic or creative-minded people are considered visual learners, SJICF thought it would be wonderful to have a visual representation of their panels that was created in real-time as it was happening. Both staff and the festival participants were thrilled by the results, and believe it will become very valuable to similar cultural events in the future.

We also utilized Zoom video conferencing for our panel discussions, keynote speakers and workshops, as well as curated and produced online content for our TD Circus Tent which presented over 10 hours of exclusive video during the festival weekend.

Having a stable internet connection and the latest technology was, of course, very important to transposing a festival to virtually entirely online. With this in mind, SJICF partnered with Memorial University’s Emera Innovation Exchange Centre which specializes in remote learning and video teleconferencing.

Another fun event we created using technology to promote a sense of place was our Digital Buddy Walks. International participants would connect with a “local ambassador” over Facetime or WhatsApp video software, and the local person showed the international guest around St. John’s via a video call. This digital tour ended with a live pop-up performance, attended by over a dozen local ambassadors and their international digital counterparts.

It was also extremely important for SJICF to provide accessibility options to this new technology so we partnered with InclusionNL, a not-for-profit that helps increase access and inclusion in the workplace and other sectors of society.  They were incredibly helpful and insightful in suggesting ways to integrate inclusion initiatives rather than it acted as just an add-on.  So, for example, in addition to closed captioning and similar technologies, SJICF panelists included visual descriptions of their appearance when they introduced themselves to the video audience.

There’s an old Newfoundland traditional saying that goes, “High tide raises all ships,” and that couldn’t be more true for a small arts organization located on a forgotten island in the middle of the North Atlantic. The partnerships and friendly working relationships with other arts organizations locally, nationally and internationally is what was really the key to the success of the festival. We partnered and co-presented events withEnPiste,International Market Of Contemporary Circus, [email protected], the National Circus School and École De Cirque De Québec as well as Memorial University and local small businesses. These relationships connected and expanded our network to easily find solutions that otherwise may have been out of reach for a small arts group like ours. We sincerely believe strong partnerships are the key to success in the 21st Century!

After the festival, SJICF plans to send a follow-up booklet, available as a digital PDF or a physical printed copy, to all the participants that collates all the information from MURAL, as well as the visual scribes documents and other photos and digital artifacts.

It is the sincere hope of the SJICF and its staff, that because of the world-wide pandemic and being forced to view the festival in a new light, we attracted more and varied circus professions from all corners of the world. In effect, because of the appearance of new obstacles in bringing people together physically and in-person, all attendees were able to create meaningful connections with other participants and that using online digital platforms created a virtual aspect of the festival that will continue into the future to allow more access and inclusion from people from all over the globe! Brad Gover has worked with a number of organizations as a public communications liaison.  He worked in this capacity with mVAN, the Mobile Vendors Association of Newfoundland, the Nickel Independent Film Festival and NIFCO, the Newfoundland Independent Filmmakers Co-Operative. He is also a film and media producer who is very active in the local film and television production industry. He recently produced two feature films, “Away From Everywhere” (2016), starring Shawn Doyle and Jason Priestley, as well as “Riverhead” (2016), which was nominated for two Canadian Screen Awards. He directed “Sister Morphine” (2014), a television documentary about nurses who steal drugs from the patients they’re supposed to be taking care of, as well as the short film, “The Care Package” (2006), about a young man who mails himself to his estranged girlfriend. Brad loves watching old black and white Hollywood movies and has a cat named Marvin.