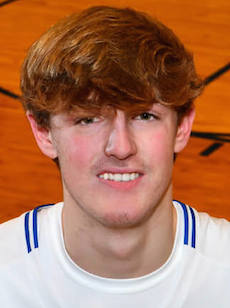 Vinson averaged 22.3 points, 8.9 rebounds, 6.0 assists, 2.6 steals and 1.9 blocks while shooting 56.7 percent from the field during his team’s 30-4 season. He was named most valuable player in the state tournament after getting 20 points, 14 rebounds and seven assists in the championship game.

The award also recognizes high standards of academic achievement and exemplary character demonstrated on and off the field. Vinson maintained a 4.0 grade-point average, volunteered at a soup kitchen, served as a youth basketball coach and donated time to community beautification projects.

The Northern Kentucky University recruit is now a finalist for the Gatorade National Boys Basketball Player of the Year award to be announced in June.

He has the opportunity to award a $1,000 grant to a local or national youth sports organization of his choosing. He is also eligible to submit a 30-second video explaining why the organization he chose deserves one of 12 $10,000 spotlight grants.

Brossart won this year’s 10th Region championship under Bundy, who compiled a 95-52 record in five seasons as head coach of the Mustangs.

He will take over a Mason County team that lost in the first round of the 10th Region tournament last season and finished with a 14-10 record. Two of the top three scorers on that team were seniors.

“I’m tremendously excited and honored to be selected as the next head coach at Mason County,” Bundy said in a press release from the school. “The program’s tradition of success and great community support make this one of the top jobs not only in the region, but in the commonwealth.”

Teams scheduled practice sessions on the three days leading up to the all-star game that raises money for the Northern Kentucky Football Coaches Association scholarship fund.

Last year’s all-star game was cancelled due to the pandemic. In previous years, one student-athlete from each team received scholarship money from St. Elizabeth Healthcare and the coaches association to be used toward their college education.

This week’s game will feature some of the top senior players from last season when nine of the local teams finished with a winning record.