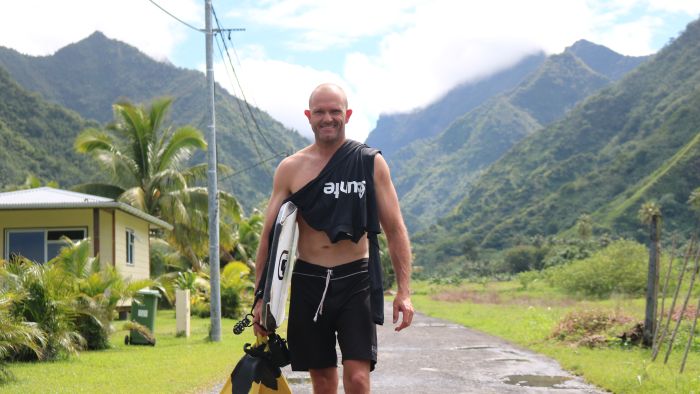 It is a clear winter’s day and as waves roll in at a popular Port Macquarie break, Damian King appears happy and relaxed.

The three-time world bodyboard champion says it’s a place where he spent much of his youth.

“I used to come down here from sun up to sun down and I’d just live on the headland, so it’s always been a huge part of my life,” he said.

King has influenced a generation of bodyboarders and although he’s retired from professional bodyboarding, he still inspires others and hits the waves every chance he can.

“It’s really pure — I love that you can get in the water, have fun and push yourself … it’s an escape, I can relax,” he said.

“It cleanses your soul and gets me back to where I need to be.

“It’s still probably the biggest part of my life, it’s right up there with my family, and obviously work, but it feels like if I couldn’t do that [surf] I wouldn’t operate.”

King rose to success from humble beginnings and it was the death of his mother which motivated him to claim his first world bodyboarding championship in 2003.

“It was bittersweet for me,” he said.

“My mum passed away early on in the year and that was the kick up the butt that made me kind of go, ‘Either give this sport a red-hot crack, or just give up’.

“I trained from sun up to sun down and at the first event in Tahiti I took my Mum’s ashes over and ended up winning it.

“I kept that going the whole year and eventually nailed it and won Pipeline.

“It just felt like one of those Hollywood movies, where there’s a bit of a story and you get there at the end … to go through what I went through that year and then win was pretty amazing.”

King won the world title again in 2004 and then in 2011 claimed the Dropknee World Tour, retiring from professional bodyboarding in 2013.

“I was pretty exhausted — it took a lot out of me doing that for so many years and a lot of stress too,” he said.

“Let’s face it, the only position you want to get is first, even second you think, ‘I should have done that to win it’ … so you put yourself through a lot to get to the top spot.

“I’d had my daughter too, and with surfing and with my career I always tried to push it pretty hard in big waves.

“I had a pretty scary experience at Cloudbreak [in Fiji] where I nearly drowned, that was a bit of a wake-up call.”

‘I get just as scared as the next person’

“The biggest surf I have probably been in was that session in Fiji in 2011, it was like a one-in-20-year swell, it was terrifying to be honest,” he said.

“I get just as scared as the next person, but the difference between me and other people is I just make myself do it, it doesn’t matter that I am petrified or think I am going to die.”

These days though he tries to avoid life threatening conditions.

“Basically there’s a rock shelf out in the middle of Cronulla … it’s a really heavy and kind of dangerous wave but a really good quality wave as well,” he said.

“It always blows the cobwebs out and makes me feel alive again.”

‘The Joker’ finds a new niche

Known in bodyboarding circles as ‘The Joker’, King remains down-to-earth, ready for a chat and a laugh with the many locals who know him.

It has served him well in his new real estate career.

“It’s been a really good fit for me because I didn’t want to keep beating my body around doing a trade or anything, as I copped a bit of a bashing over the last 15–20 years bodyboarding,” he said.

“I love Port Macquarie and don’t mind talking to people as well — as you can probably imagine [laughs] — so it’s really good.”

When he is not working, King loves sharing bodyboarding with his family.

“I love taking my daughters out,” he said.

“I just want them to get that bug where they can go out there and just forget about everything and have a good time.

For King surfing is a way of life.

“The waves take you to destinations, but it’s those destinations that give you experiences,” he said.

“It’s a real game changer for your life I believe … you go to places and enjoy the environment and the people and the waves.”

Listen: Jeremy Flores on how he partied for two years after winning the Pipe Masters; the ruination of Reunion Island via drugs and sharks and smearing his brains on a reef in Sumbawa!