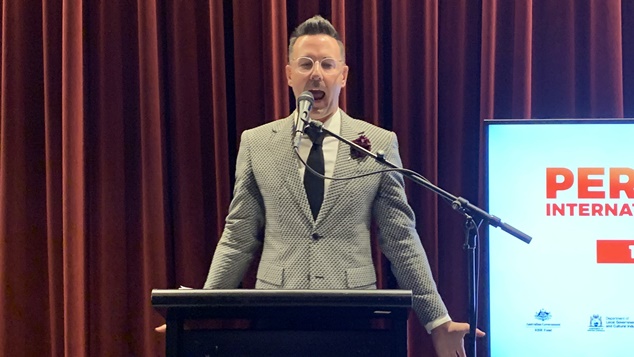 Cabaret star Michael Griffiths has eagerly been awaiting the launch of the Perth international Cabaret Festival, as the event’s inaugural Artistic Director he’s brought together some of Australia’s most acclaimed and respected performers for a season of outstanding entertainment.

One of the downsides of the COVID-19 situation might be that many international entertainers can’t currently visit, but the upside is all of Australia’s world class performers are here at home and available.

Festival founders Graham Lovelock and Ali Welburn said they were thrilled to be finally launching their festival, which has been years in the making.

“We’re so thrilled that we can go ahead with our festival this year, and indeed more excited about the exciting and trilling news that we will have 100% capacity as well.” Welburn said at the launch.

The program put together by Griffiths has a cavalcade of talented performers.

International cabaret diva sensation Meow Meow, the master of intricate guitar tapestries and textural arrangements Lior and exquisite local First Nations duo Gina Williams and Guy Ghouse are among the artists set to activate all of the spaces throughout His Majesty’s Theatre during the week of cabaret shows.

Griffiths said it is only fitting that we begin the inaugural cabaret festival with stories from the world’s oldest living culture.

“Cabaret is all about story-telling, and Gina and Guy welcome you to sit at their campfire and share songs and stories, matched with rare Noongar language all to the glorious strings of the Dolce Ensemble and the piano genius of Russell Holmes.”

“We are very excited by the programme for 2021. It’s West, it’s East, it’s vibrant, it’s fresh, it nods to the old and champions the new and I couldn’t be prouder,” he said.

Griffiths himself will be performing, delivering a greatest hits collection of his many tribute shows that have impressed audiences over the last decade. Griffiths has delivered shows celebrating the works of Madonna, Annie Lennox, Kylie Minogue, Cole Porter and Peter Allen. Griffiths will also host a late night show featuring a rotating cast of talent.

Close friend and collaborator Carlotta will also be heading west, for The Party’s Over a show which has been dubbed as her final tour of Australia before retirement. This is your very last chance to see her under the bright lights of the stage where she has wreaked havoc for almost 60 years.

The fabulous Steven Oliver, star of the TV series Black Comedy will perform his show Bigger and Blacker, delivering its WA premiere. The show weaves stories of love and loss creating a mix of contemplation and comedy.

Fiona Choi, who starred in the TV series The Family Law, will bring Dragon Lady – The Many Lives of Anna May Wong to the festival. From immigrant’s daughter to Hollywood’s first Chinese movie star to international style icon, Anna May Wong’s career spanned silent film, talkies, Broadway, cabaret and television before she was thwarted by alcoholism and an industry unwilling to see past her Asian face. Choi show has been acclaimed as a sensation when it’s played in other cities.

Elsewhere in the program Lucy Williamson will team up with Joe Louis Robinson for a tribute to Judy Gardland, while Michaela Burger and Greg Wain will deliver a show looking into the life and work of Edith Piaf.

Arts Minister David Templeman shared his excitement for the new festival, telling the crowd at the launch that the timing was perfect as West Australians dealt with the challenges of the preceding year.

“At a time when we’ve been through this bizarre experience, and certainly those involved in the arts have unfortunately been in the forefront of the impact of venues not being open, spaces and places where the creative juices of our creative talents were able to be shared, it is so important that we remind all of our population, all of our leaders, and all of the people in our population, just how important story-telling is.” the Minister said.

“Just how important it is that our arts sector thrives, and thrives admirably and continuously, because we are also a healing element of human nature and that is going to be very important moving forward, as we’re still in very much uncertain waters.”

Take a look at the whole program and start buying your tickets.

You can support our work by subscribing to our Patreon
or contributing to our GoFundMe campaign.