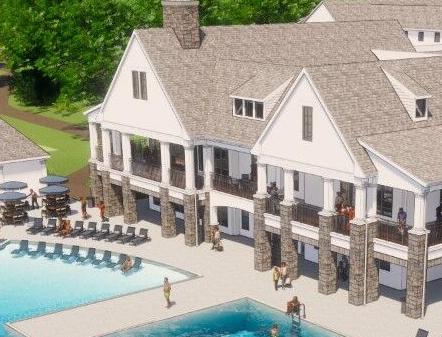 Lancaster Country Club’s leadership realized for years that having an aged, dwindling membership did not bode well for the club’s long-term future.

From a peak of 703 members in the year 2000, membership had dropped to nearly 500 by 2017, convincing the club’s leadership it was time to try to reverse that trend.

The club began researching and planning a bold, far-reaching diversification strategy, following the example of the top clubs in the nation.

Three years later, the results of their homework are beginning to be translated into a tangible form.

Lancaster Country Club broke ground earlier this month on a $20 million expansion and renovation project intended to reposition the club as a facility with stronger and broader appeal.

The project’s focal point will be the construction of an activities pavilion that will include a 100-seat casual-dining bistro, fitness center, group exercise room, indoor golf simulators with multi-sport versatility, children’s play area with child care, outdoor kitchen and bar, and outdoor swimming pools.

Ryan Granruth, the club’s general manager and chief operating officer, predicted that the 30,000-square-foot pavilion will be “transformational” for the club.

The expansion and renovation project, named “A Defining Moment,” has a far-reaching purpose, according to Granruth.

“Our vision is to provide defining moments in people’s lives regardless of age, gender or family/marital status,” he said.

Such moments can occur, he continued, “on the golf course, (during) a wedding or anniversary celebration or simply a memorable meal with friends and family at a moment where quality time together is so precious in our society.”

While “A Defining Moment” is aimed at enhancing the club’s appeal across the board, special emphasis is being given to making the club more popular among younger professionals with families. The pavilion is the cornerstone of that outreach too.

Completion of the pavilion is set for Memorial Day weekend in 2021.

Lancaster Country Club was founded in 1900 in the Rossmere section of Lancaster, across from Lancaster Catholic High School. In 1913, the club moved to its current address at 1466 New Holland Ave. There it has 430 scenic acres, mostly in Manheim Township, overlooking the Conestoga River.

The member-owned club is coping with what many older businesses go through — discovering that its traditional business model has what’s in essence an expiration date, prompting an urgent search for a fresh direction that will lead to long-term prosperity.

The project also will add 50 jobs to the private club’s 150-employee staff, and make the club a more attractive setting for weddings, meetings, parties, golf outings, business gatherings and other events.

Although much will be new at the club, its leaders underscore that its core will remain the same: its world-renowned golf course, created by famed Philadelphia course designer William Flynn in 1919 and revised by him in 1940.

The club’s plan is to supplement the golf course with stronger ancillary activities, especially ones that will resonate with younger adults.

“While golf will always be the centerpiece of the country club industry, it’s no longer self-sufficient,” said Granruth, who was hired by the club in 2017 after serving as assistant general manager at clubs in Baltimore, Denver and Tucson.

Granruth believes that the sweeping upgrades will make Lancaster Country Club the top club in central Pennsylvania and among the top 5% of clubs nationwide, in terms of quality and features.

“The vision is to put ourselves, in all of central Pennsylvania, as the premier club. We’ve got it from a golf standpoint,” a status highlighted by the U.S. Women’s Open choosing the club for its 2015 and 2024 events. “…Now we want to be the front runner for the true country club experience in the entire region,” he said.

Getting to the Sept. 4 groundbreaking was a deliberate and thorough process, with Granruth serving as the catalyst.

Hired in early 2017 to lead a change of some kind, Granruth spent his first six months on the job studying the club’s financials, trends and demographics.

Among the most startling discoveries: the average age of its members was 67.

“That set off alarm bells,” Granruth said. “We didn’t have a problem then but in five or 10 years, we’re going to have a problem. So we want to get ahead of that curve.”

Granruth then recommended to the board that it recommit the club to being a top facility for families, as its century-old mission statement prescribes. The board agreed.

That led to a “state of the club” report to the membership later that year, disclosing the club’s discouraging long-term outlook and the intention of the club’s leadership to find a sustainable path forward.

Next came two years of surveying its own members, gauging the interests of prospective members plus studying other clubs — all part of the process of deducing what changes to make. Club leaders put the resulting plan in front of club members for a vote in 2019; 87% said yes.

Said Gardner, “If we want the club to remain a vibrant part of Lancaster, we need to engage the next generation.”

To help fund the plan, members are paying a special assessment of an undisclosed amount. But members were assured that the expense of the project will not affect their annual dues.

Since the club disclosed the project to the golfing community in the spring, 45 new members have signed up so far, boosting the rolls to 553, according to Granruth. That’s more than double the 20 new members that the club had attracted annually in recent years, with three months to go in 2020.

What’s also significant is the average age of the new members: 41, an indication that the club’s new features have the appeal that the club’s leadership hoped they would.

Lancaster Country Club’s strategy got a strong endorsement from the Club Managers Association of America.

“Ultimately club members today want that resort-style feel just down the street at their club. Lancaster Country Club is making that happen with their investment in upgrading the club’s amenities,” said Jeff Morgan, the association’s president and CEO.

Having more amenities on the horizon is what persuaded Dr. J.P. Shand and his family to join Lancaster Country Club in July.

The “Defining Moment” initiative “sealed the deal,” said Shand, age 36,  whose family includes his wife Sasha, also 36, and their son Jack, who turns 2 in December.

Shand, medical director for psychiatric services at WellSpan Ephrata Community Hospital, grew up spending hours at the club, as his parents are lifelong members.

As adults, Shand and his wife still visited the club sometimes, mostly to play golf and tennis respectively as well as to socialize.

But the imminent additions made a membership irresistible. “It will change the face of the club and the way we engage with each other at the club,” Shand said.

Lancaster Country Club was set to make a public announcement of its “Defining Moment” project in mid-March. But the arrival of COVID-19 triggered widespread business shutdowns that week, prompting the club to postpone its public announcement to this month.

Nonetheless, work on the project continued.

“We kept the process going. We heard from our membership that they still wanted to proceed forward. They exercised caution. But they understood the importance of this undertaking for our future. Our future is coming, COVID or no COVID. They want us to have the opportunity to write our future, rather than have our future dictated to us,” said Granruth.

The expansion and renovation project’s general contractor is Wohlsen Construction. The owner’s representative is Fidevia Construction Management & Consulting. RLPS Architects is the project designer. Fulton Bank is its lender. All four businesses are based in Lancaster County.

The Trump Administration Says Diversity Training Can Be Harmful. What Does the Research Say?