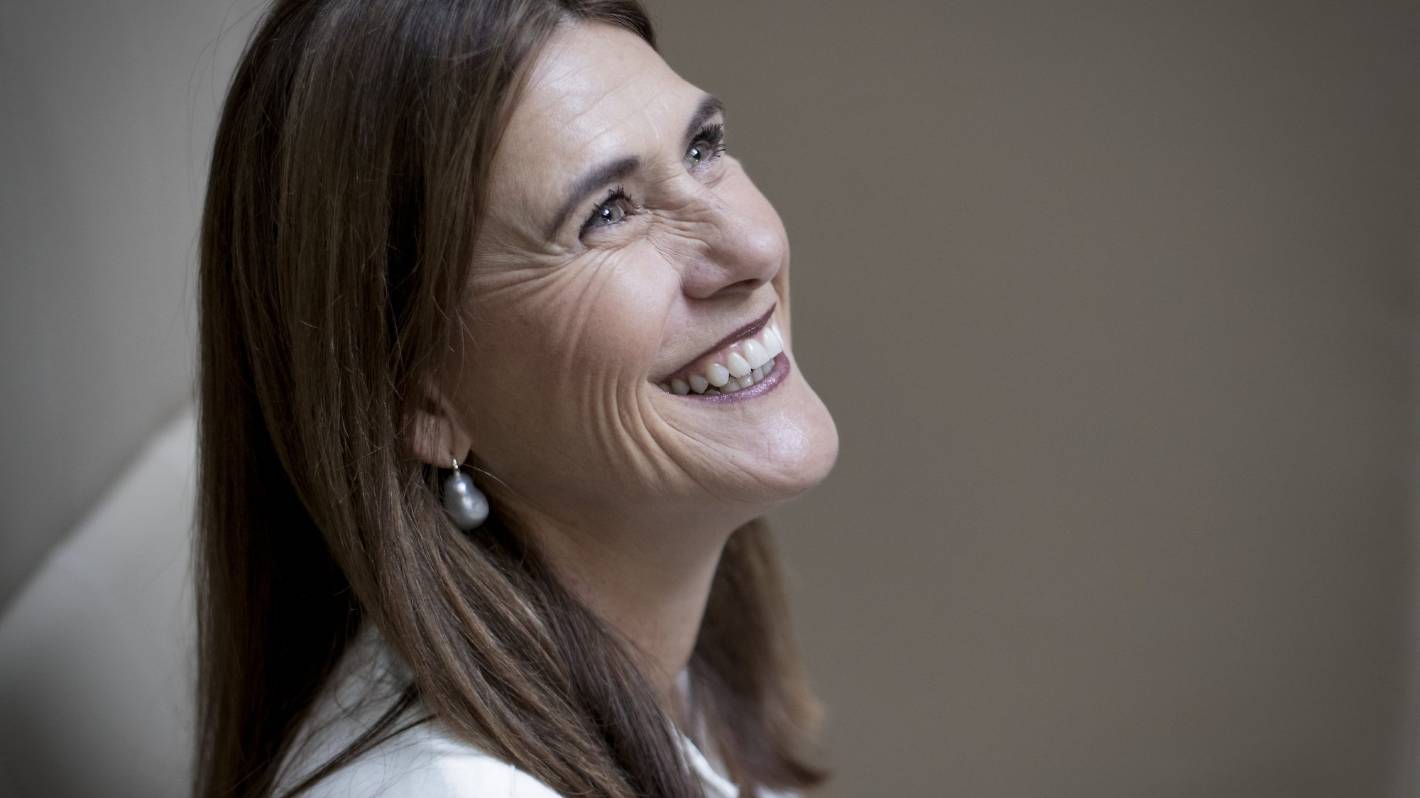 Her mother, the matriarch of their “big, loving farming family”, had breast cancer. She fought fiercely – beating the disease – but quietly: “We weren’t allowed to tell anyone”.

Unlike now, when we are inundated with media stories, billboards, and television commercials about breasts and breast cancer, it was barely discussed just decades ago.

It’s this jarring reality that pushes Smyth along, one she hopes spares other women and families from going through it alone.

READ MORE:
* Cancer patient urges women to investigate their mammogram options
* Will you still see me, will you still screen me, after I’m 69
* Why the fuss for a female appointment?

As the woman at the helm of two of the country’s highest-profile companies – chairwoman of Spark, and director at Auckland International Airport – Smyth’s eye-reaching grin and hard-working ethos are regularly splashed across business pages.

Smyth “was in a hurry from a young age”, packing groceries at Foodtown Manukau City aged 14, before leaving school for university in the sixth form.

A south Auckland native, Smyth was raised on a farm in Papatoetoe’s Redoubt Rd – then a far cry from the built-up arterial it is now – and spent her childhood riding her horse up and down the metal road.

She was one of six children to Ransom and Anne Smyth, who dabbled in dairy farming, stud cattle and later kiwifruit.

“There were no expectations on me, or my family.”

At Papatoetoe High School, she fell in love with maths and accounting. Her dad suggested she do a Bachelor of Commerce, “so off I went” – the first in her family to attend university.

A bursary with Inland Revenue bonded her to the department for three years after she graduated but paid for her books.

While completing her chartered accountancy, firms began tapping her on the shoulder, and Smyth started at Deloitte aged 21.

It was “head down, bum up, really” for the better part of a decade; she was made a partner aged just 30. Though she wasn’t consciously aware of deficiencies in diversity, she was one of just two women partners at the time, and saw few senior women ahead of her.

After working in the role for a couple of years, with drinks brand Lion Nathan as her biggest client, its chief executive invited her to its head office in Australia. Smyth “took a real gamble” and left her partnership at Deloitte for the Sydney-based company.

It was a risk she says was critical in getting her where she is now. “She went from advising to doing” and also took a three-month course at Harvard Business School – the genesis for later starting her own businesses.

It was during this time in the corporate world – where there were “absolutely no senior women to be seen” – that Smyth realised “I’m different”. She loved the work but “didn’t want to go down and drink beer at the bar”.

After a few years in Sydney, Smyth stood back for the first time and reflected on the constant grind she’d embarked on since starting her career, the slog of 12-15-hour days bleeding into one another.

She left Lion and went on a six-month OE, before settling with “her sounding board” and future husband Paul Lockey on Auckland’s North Shore.

The couple spent 12 months looking for businesses to buy, during which Smyth became pregnant through IVF.

Soon after daughter Mikayla’s arrival, the paperwork was finalised on an infrastructure company. “She’d be lying there sleeping, and I’d be doing due diligence on this business … we job-shared care of our baby.”

Six months later the couple bought a lingerie wholesaler, which they held on to for a decade.

Other opportunities came knocking over time: Smyth was approached for her first directorship at New Zealand Post, before the one she still occupies today at Spark.

Fresh from its split with Chorus in 2011, the company was sniffing out new blood for its board. Smyth joined as a director and was appointed chairwoman of the human resources sub-committee, only after making clear she wouldn’t be the only woman at the table.

Over the following years, Smyth took on chairing the audit and risk committee, and in 2017 became Spark’s first female board chair.

Unconscious bias is “everywhere” at executive level, Smyth says, and the conversation shouldn’t just be about gender, but ethnicity and politics too.

“You have to break that down … every woman making a stand does that for the next one.”

Championing gender diversity in the boardroom isn’t where Smyth’s stand for women ends. It was a cause closer to home that led to her longest-running leadership role – perhaps the closest to heart.

In 1996, two years after the formation of the Breast Cancer Foundation (BCF), Smyth was approached to join the volunteer board.

Despite being “hugely busy, working all hours under the sun”, she was drawn to the opportunity to give back and honour her mother, whose mastectomy and early detection of the disease saved her life.

In 2009, she became chairwoman, a position she still holds.

Gavin Painter is an immunologist working on therapies that retrain the body’s immune system to combat cancer. (First published in October, 2019)

More than 25 years after beating cancer, Anne gave her daughter permission to tell her story to shine a light on the disease – testament, Smyth says, to how times have changed.

Under Smyth’s leadership, the foundation set the aspirational vision of ‘zero deaths’ from breast cancer, and has become the country’s biggest non-governmental funder of breast cancer research.

During her time with the foundation, New Zealand’s breast cancer death rate has decreased by more than 30 per cent.

Even after 14 years, awareness and breast screening remain the most important part of what they do, Smyth says.

The importance of early detection “seems like an old message, but it’s still the right message”.

The chance a woman with breast cancer will survive 10 years after diagnosis is 92 per cent if detected by regular mammogram. This drops to 75 per cent if the first sign is a lump.

But as long as 650 Kiwi women continue to die of breast cancer each year, there is still scope for more screening and better access to drugs, she says.

“The more we can play into education and awareness, the more we can advocate for patients, for research and drugs, the more [likely] breast cancer need not be a disease that will kill you.”

Smyth has lobbied the government to widen access to breast screening to those over the age of 69, in a bid to capture the “high incidence” of women who develop the disease in their 70s, and advocates for those living with advanced breast cancer, which impacts about 300 Kiwi women every year.

GPs are the main line of support for many with advanced breast cancer, but recent BCF surveys found up to 75 per cent were suffering major financial hardship following diagnosis, with some choosing doctors’ visits over feeding their families.

It was some of this work that led to Smyth receiving an email during the coronavirus lockdown that she never anticipated.

It asked if she would accept a Queen’s Birthday honour, becoming a Companion of the New Zealand Order of Merit for services to governance and women.

“An honour in itself”, it also carried a special weight, as her mother received a Queen’s Service medal for 30 years of voluntary service for children’s charity Plunket. The medal is hung in the hallway of her family home.

While quick to deflect any glory from herself, holding the Breast Cancer Foundation, its team and the women it supports in the spotlight, Smyth was “chuffed”.

Now 54, she has chosen not to have dozens of directorships

This has given her the freedom to be with her family, and move to Queenstown for the winter months, where 15-year-old Mikayla, a New Zealand champion for under-16 ski-racing, has access to the best slopes the country can offer.

Despite being able to rattle off a CV as long as your arm and having made real change to the lives of countless women – whether it’s advocating for cancer screening or helping others achieve their first commercial board appointments – Smyth is exuberant, warm and down to earth.