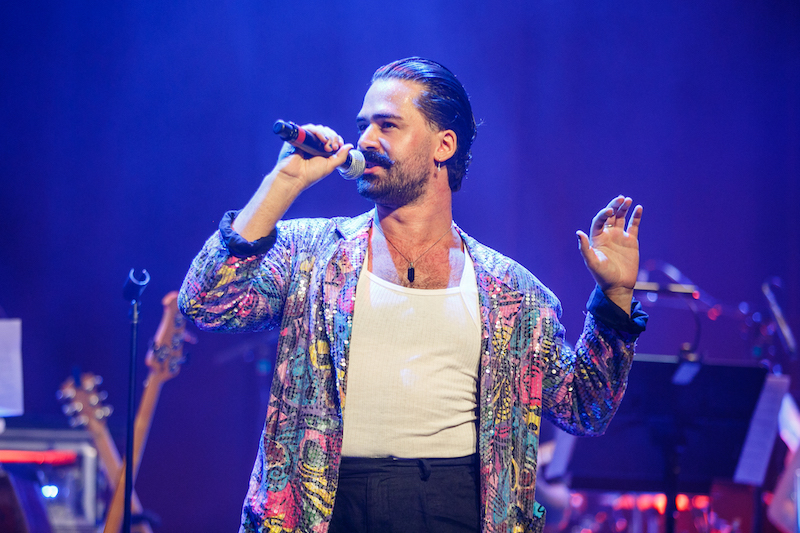 With great success comes great expectation. In a relatively short time – a mere seven years – Hayes Theatre Co has made itself indispensable as it redefines what can be done in musical theatre, and particularly with what we might call heritage musical theatre.

Its opening show in 2014, Sweet Charity, and Calamity Jane in 2017 are just two shining examples from a slate of productions that have shaken the cobwebs from pieces that might at first glance seem to have little to say to a 21st-century audience. Those people who say they hate musicals have obviously not been to the Hayes.

So hopes were high for Rewired: Musicals Reimagined by Hayes. The company, like most others around the country, has been offstage for many months. What better way to return than with a concert of songs from classic musicals presented in a very Hayes way?

It’s an idea full of promise, not all of which is fulfilled. It is a puzzlement for instance (not that The King and I features in Rewired) that MC Virginia Gay sings only once, in a duet. She is a goddess. An underused goddess. And the sound system fails to favour all voices equally in a concept that really, really requires you to get the lyrics. What the hell is this song, you ask yourself pretty much every time as new, shape-shifting arrangements from the stellar band tease the ear. Ah! That would be Where is Love? from Oliver!, and boy, doesn’t it sound wonderfully strange?

That said, when it is good Rewired is very, very good. It starts, as perhaps all reimagined musicals should, with Trevor Ashley. Ashley is one of those Sydney fixtures who seems to have been with us forever, performing the necessary task of sending up the great divas of popular music while profoundly adoring them. His Liza Minnelli is one of life’s joys and is wheeled out in Rewired to offer us her interpretation of Norma Desmond in Andrew Lloyd Webber’s Sunset Boulevard (Minnelli has said she was Lloyd Webber’s first choice for the role on Broadway; it never happened).

Ashley, who is in top form, is resplendent in a sparkly black trouser suit, pixie haircut, vast bosom and flowing red scarf as he throws As If We Never Said Goodbye around the room, all quivering lips and a catch in the voice. There’s a shamelessly huge finish. Job done.

As Gay comments, it is the job of Ashley and his peers to “roll ourselves in glitter and be professionally bonkers for you”. No one is as bonkers as Ashley, it goes without saying, but Ryan Gonzalez’s way, way out of left field set comes close. Here is Lionel Bart’s Oliver! truly reimagined. Extremely familiar lyrics are put into a totally alien – for them – sound world as Gonzalez sings Food, Glorious Food, Where is Love? and Reviewing the Situation to sensuous, high-octane Latin rhythms. Les Mis is also given the big-fish-out-of-water treatment with a head-banging hard rock approach, which on opening night was marred by a sound mix that made it almost impossible to work out just which of the Schönberg-Boublil numbers Toby Francis was singing. Francis is a terrific performer who deserves much better. The versatile band (Charlie Kurthi, Michael Napoli, Emile Nelson, Laura Power) is front and centre sonically speaking and is spectacular.

The rewiring of Oklahoma! from Emily Havea is subtler but no less interesting. In a shake’-em-up piece of casting Havea played cowboy Curly in a recent Perth production directed by Richard Carroll, who is also responsible for Rewired (and Calamity Jane). Here Havea brings a vibrant country tinge to Oh, What a Beautiful Mornin’ and is joined by Gay for People Will Say We’re in Love. A different light is shone on the song and the musical.

The Hayes likes us to remember we’re living in the 21st century. Havea makes a graceful reference to the advances made by people of colour in what has been a white-dominated field. It feels more forced, however, when lush-voiced Olivia Vasquez talks earnestly about stereotyping in the business, particularly as part of a set that lets Rewired meander to its close by having a less clearly identifiable musical identity. Gonzalez has his point to make too, but more organically. The lyric of Nancy’s song in Oliver!, As Long as He Needs Me, is given a little tweak.  “He” becomes “they”. Simple and effective.

Carroll makes the wise move of weaving Ashley in and out of the show to give a small semblance of structure – and of course to give Ashley time to change one lot of sequins for another. He provides Rewired with its most indelible images: he is Shirley Bassey singing Gethsemane from Jesus Christ Superstar (Ashley truly does have no shame); Dolly Levi from Hello, Dolly! belting Eva Peron’s Don’t Cry for Me Argentina; Cher presiding over the show’s finale with Starlight Express.

Rewired: Musicals Reimagined by Hayes runs at the Seymour Centre as part of Sydney Festival until 24 January