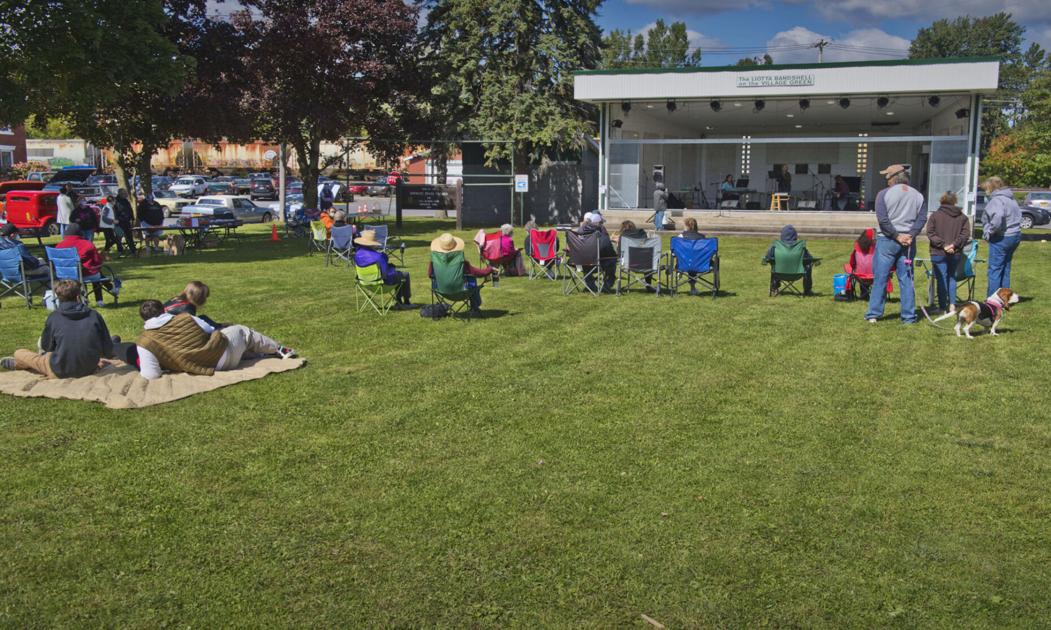 It would be Past Doubt’s second gig this summer. The band’s first performance was at the Norwood Lake Association’s kayak poker paddle in August. Other gigs, in the midst of the coronavirus pandemic, have been hard to come by.

“They saw us at the beach,” Mr. Hadzovic said, “and asked us to play at this.”

“We play a few covers, but we are mostly trying to do more original stuff,” Mr. Hadzovic said.

All four members are juniors at various colleges, but have been able to keep rehearsing and looking for places to play because they’re all attending classes remotely.

In addition to the live music at the Autumn Festival, a car show and a variety of vendors were spread out around the little park.

Maxine Smith of Knapp Station was selling something that wouldn’t have been seen at any previous Autumn Festival — face masks. Ms. Smith starting making the masks in March. She said she’s manufactured at least 1,500.

Ms. Smith, no stranger to the sewing machine, had been making clothing for her grandchildren, but this year found a new demand for her talent.

“When COVID hit, there was a need for them, and someone approached me and so I started making them and selling them,” she said.

Ms. Smith mainly sells her masks on Facebook. The Norwood festival was her first time selling out of a booth. The masks, which come in sizes to fit everyone from small children to adults, were priced at just $4.

Most of the money she makes has gone into buying more material and a new sewing machine, she said.

“Some people like them to go with their clothing,” she said.

Lori L. Pitts, who just retired from a 30-year career working in a school kitchen, was selling her paintings at the festival.

Ms. Pitts paintings are mostly on saw blades and pieces of slate and feature a variety of subjects from animals to lighthouses.

“I’ve just been painting for the last four years,” Mrs. Pitts said. “I used to draw and never thought I could paint, but I just kind of tried it and I enjoy it.”

Mrs. Pitts said she sells her work mostly at crafts shows, but it’s been “slim pickings” this year. She was accompanied to the festival on Saturday by her husband Al, who was showing his 1965 Chevrolet Chevelle SS in the car show.

Mrs. Pitts said she sold seven or eight paintings and was grateful for the beautiful weather at the event.

All The Incredible Moments From Day 2